Swift Dzire vs Amaze vs Xcent: Hatch-ing a boot

Compact SUVs and now its time for compact sedans. Ladies and gentleman, presenting the new Hyundai XCent, the new compact sedan from the Korean manufacturer. This at the moment is competing with the Honda Amaze and the Maruti Suzuki Swift DZire. If you wait for a year and a half, there will also be the Tata Zest and even the Ford Figo sedan competing. At the moment, we pit the current three compact sedans and find out which is a good option for you. 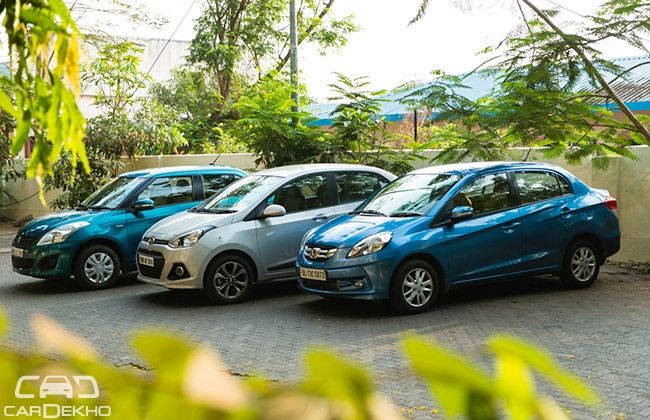 The new Swift’s design has been derived from its predecessor and the same has been done with the DZire too. Now, the difference is that the DZire is now under 4 metres, which means that the boot is smaller as the wheelbase of the new Swift had been increased. The boot again has been slapped on the Swift and it still looks like an after thought, even though much better than the previous design. The overall design doesn’t look appealing at any given point of time. DZire’s boot is also small, when you compare it to a sedan.

The Honda Amaze, despite having its design similarity to the Brio doesn’t look like a later thought. When the Brio was being designed, the engineers even designed the Amaze at the same time. This made it easier to design a sedan and even a hatchback on the same platform. The Amaze has a longer wheelbase than the Brio, increasing the difference in similarities between the two.

The Hyundai XCent is also a derivative of the Grand i10. This compact sedan is also based on the hatchback. The Grand i10 has a conservative design when compared to other Hyundai Fluidic designs. This is neither sober nor trendy, something in between. Hyundai is trying to appeal to those who aren’t found of flashy but premium looking designs with the XCent and the Grand i10.

All three have different styling, the DZire is a complete no-no in the looks department. The Amaze and the XCent are the ones you need to pick from.

In the interiors, the Swift DZire leads the way in styling. The instrument panel design is contemporary and everything is easy to use. The seats are large and comfortable and at the same time they have the beige and black interiors to add some premium-ness. The front row seats have adjustable headrests, which isn’t seen on any other competition. The DZire’s interior quality is good and even the feel and fit and finish is of high standard. The space in the Swift DZire is just fine and even the boot is small than what you expect in a sedan. The sub-4 metre length made Maruti chop of the boot. The equipment level on the DZire is good.

The Honda Amaze on the other hand, is a well-designed product. Honda’s strategy of Man Maximum Machine Minimum has made the interior of the Amaze very spacious. The fit and finish of the plastics is good, however it lacks that premium feel. Even the equipment level on the Amaze is just fine. What Amaze wins on is space and comfort for five people. Despite the fixed headrests, it is comfortable and even the 400 litres of boot space is sufficient for a weekend drive.

Hyundai has been known to have the most feature-rich cars in each segment and the XCent is no different. It has a stylish and spacious cabin with good quality plastics with great fit and finish. There is sufficient space too with a rear AC vent, which is a segment first. All the sedans have dual airbags, ABS, integrated music system, steering mounted audio controls, however the XCent also gets push start, auto-dimming inside rear view mirror, cooled glovebox, push start and keyless entry. The space on the XCent is good, however we were the front seats had adjustable head rests to make it more comfortable for tall people.

All the three sedans come with different engines, the Swift DZire comes with the 1.3-litre multijet that produces about 75bhp and 190Nm of torque. This engine has been re-mapped for the new generation Swift DZire for better drivability, with increased ARAI mileage. However in the real world, the fuel efficiency has been reduced and it returns about 14km/l in the city. The drivability has been improved for sure be it in the city or the highway. The gear shifts are smooth too and even the acceleration is good enough.

Honda has plonked a 1.5-litre diesel engine in the Amaze, and this is their first diesel engine for India. Honda has nailed it, as this is an all-aluminium engine that produces 98bhp of power and 200Nm of torque. This engine is brilliant on paper and even to drive. It starts pulling from about 1500rpm and you never feel the need to downshift. Being an aluminium engine and lesser insulation, the noise levels on the Amaze are high, but apart from that it is just phenomenal. What is more surprising is the fuel efficiency hovers around 16-17km/l, under normal driving.

The Hyundai XCent has the smallest engine of the lot. This is a 1.1-litre U2 generation mill, which is a three-pot oil burner that produces about 71bhp of power. The drivability of this engine is good and even the fact that it pulls cleanly from as low as 1600rpm. However, there is some amount of vibration present at low engine rpm and this might make one downshift. In reality the engine isn’t stressed, just that it has some balancing issues being a three-cylinder design. Else, the drivability is good. There is no issue whatsoever. The XCent returns about 15-16km/l in the city when driven with a light foot. The XCent fares in between the DZire and the Amaze when it comes to mileage.

The Amaze’s 1.5-litre i-DTEC is the pick of the lot and there is no doubt about it. It is powerful and fuel-efficient too, with good driavability.

This is a department where all three sedans have done well. The rear is softer  than the hatches on all the three sedans for better comfort for those who are chauffeur driven. The ride is sublime and the suppleness if very good. In the ride quality, all three are neck-to-neck and all equally good.

The handling on all the three is just fine. The XCent does a good job and so does the Amaze and the DZire. Increase the tyre thickness on the Amaze and it might be a better performer than the two. To drive, the Amaze is the most fun one and the easiest due to better performance, thanks to the more powerful engine.

All the three sedans are very close as an overall package. The DZire has the Maruti Suzuki backing and better networking, Honda has the premium badge with a great product in hand and Hyundai is a brand with good after sales service and feature rich product. Hyundai has been very aggressive with its pricing and hence it is a clear winner, not to neglect that Honda Amaze is an equally good product.

Note: The Swift DZire used in the images isn’t the top-of-the-line, however we have compared the features with the top-spec ZDi.