Can Skoda’s latest beat Honda’s reigning champion at its own game? 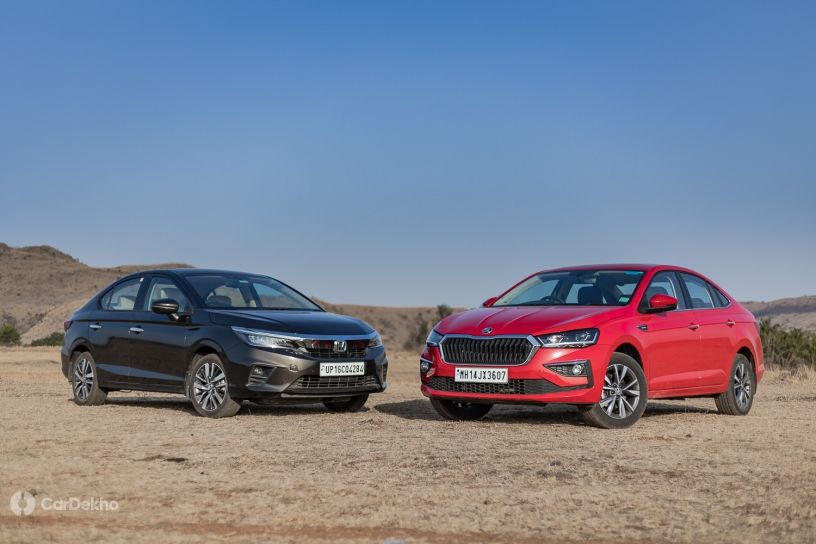 In recent years, if we could credit manufacturers for igniting and stoking the love for sedans amongst us Indians it’d have to be Skoda and Honda. Skoda with the likeable Superb, Octavia, and Rapid, and Honda with the Accord, Civic, and City.

Skoda’s erstwhile youngest, the Rapid, has sailed into the sunset, tagging in the brand new Slavia to pick up the gauntlet against Honda’s ever-desirable City. Which sedan should you bring home, and why?

While similarly sized, we see a clash in philosophies when it comes to design. Japanese influences are amply evident in the Honda City’s low-slung nose, wide chrome face and curvier profile. On the other hand, the Skoda Slavia shows off its German/Czech roots with flat yet tight surfaces, lots of crystalline detailing and crisp accent lines. Both, in our opinion, are sure to age well. If you intend on hanging on to your new set of wheels for a decade or so, you wouldn’t be tired of looking at either sitting pretty in your parking lot.

Both sedans are up-to-date with the must-haves: the City sports full-LED headlamps, whereas the Slavia gets LED projectors with a sharp daytime running lamp setup. Dual-tone 16-inch alloy wheels look smart on both, but we prefer the design on the City a little more. LED elements in the tail lamps, a shark fin antenna and subtle dabs of chrome on the door handles complete the package on these baby exec-sedans.

On paper, there’s very little separating the Honda City’s 506-litre boot from the Skoda Slavia’s 521-litre trunk. But the Skoda has a distinct advantage here, owing to how the boot is shaped. While the height of the loading lip isn’t an issue with either, the Slavia has a wider bay.

The additional 15 litres of boot space might not seem like much on paper, but in terms of usability the Slavia has a clear lead. There’s some additional practicality to be had in the 60:40 split folding rear seat as well.

Getting In and Out

In terms of storage, both sedans are neck and neck. Door pads that comfortably hold 1-litre bottles, small cupholders in the central stack, and a deep cubby under the front armrest are common to both. Gloveboxes are adequately sized, and both offer ample space to store your phones too.

The Skoda one-ups the Honda by way of little details such as a ticket clip, elastic straps to hold magazines in the door pads and grippy mats in the cupholders. The wireless charger design is super clever too.

Both sedans have a bunch of common features — this includes

Safety features are evenly matched too. However, it’s key to note that lower variants of the Skoda Slavia offer only two airbags, whereas four airbags are offered as standard on the Honda City.

Being the newer car, it’s not surprising that the Slavia has the better feature list. This includes some now-must-have features such as ventilated front seats, wireless charger and a fully-digital driver’s display. That said, we have to point out that the analogue-digital dials of the City are quite classy too.

Oddly enough, a Skoda-VW trait, one touch up/down for all windows, is available in the City, whereas the Slavia gets this functionality only for the driver’s window.

The Skoda very convincingly trumps the Honda when it comes to infotainment. The larger 10.1-inch touchscreen (the Honda gets an 8-inch display) is not just richer in terms of graphics and user interface but is also far easier to use and get used to. It also offers the added convenience of wireless Android Auto and Apple CarPlay.

Ease Of Driving and Ride Quality

For anyone upgrading from a hatchback, either sedans will feel natural to drive. The added size of the cars don’t feel daunting from behind the wheel at the slightest. Couple this with light and predictable controls, and you should be at ease driving either of them in no time.

For this review, we aren’t going to get into the nitty-gritty details of how they drive. We will point out however that both the 1.5-litre motor in the City and the 1.0-litre turbo motor in the Slavia are refined and enjoyable. The Skoda’s extra torque makes it that much more appealing to the enthusiast.

As far as ride quality goes, both sedans are at home on smooth tarmac — delivering a comfortable experience that one expects from a sedan. Push speeds into triple digits and the City tends to feel floatier, especially at the rear. In contrast, the Slavia remains poised and hunkered down. Undulations or expansion joints at highway speeds are dealt with more confidence in the Skoda too, with a suspension that settles immediately. We wish the thud sound from the suspension was better insulated though. The Honda has a sharp kick-back, which has the occupants experience vertical movement.

Over bad roads, at super slow speeds (<20kmph), the City finds its feet. It sails through without disturbing the cabin. The Slavia, on the other hand, rocks the occupants side-to-side a fair bit. Thankfully, there’s a solution: pick up the pace. The additional 14mm of ground clearance on the Skoda might just come in handy here too, letting you go faster over broken roads. But bear in mind, while both sedans are reasonably adept at dealing with our roads, with full loads (especially over nasty speed breakers) — it’s just wiser to take things slow. And that's where the City in fact has an advantage by not compressing the suspension much. The Slavia can touch its belly under compression if you are not being careful.

Despite slugging it out in the same space, these two sedans offer distinctly different experiences. While you won’t go wrong with either, here’s what you should keep in mind to choose better:

Pick the Honda City if:

We do wish the City had better highway manners. Also, an old-school naturally aspirated engine paired with a manual/CVT is certainly reliable in the long run, but also a bit staid when compared to modern turbocharged motors.

Pick the Skoda Slavia if:

The Slavia doesn’t really capitalise on its extra wheelbase by offering more kneeroom. Also, compared to the City the cabin feels narrow, making you feel like you’re in a car that’s a size smaller. Our biggest gripe with the Slavia continues to be the interior quality, that could definitely do more to live up to the badge on the nose.