Published On Mar 31, 2014 By Kunal Kelkar for Hyundai Xcent 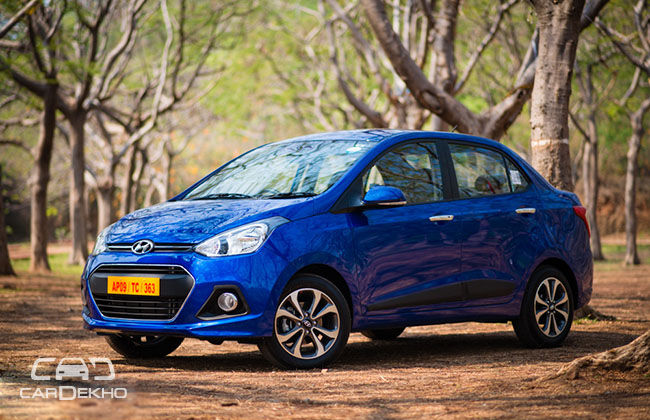 About 70 percent of sales in the Mid-segment category of vehicles come from the sub-four meter category of automobiles. This is the most appealing segment to a growing car market like ours. Customers are always looking to upgrade from their hatchbacks and get a small family sedan. There are a few options in the category, the most well known being the Maruti Suzuki Swift Dzire and the Honda Amaze. Now the famous Korean manufacturer, Hyundai has made it's presence felt in this mid-sized segment as well by launching the new Xcent. We travel to Hyderabad to see what the entire buzz is about.

The first thing you notice about the Xcent when you look at it is that it looks exactly like the Grand i10. That is good thing. The Grand i10, according to us, looks fabulous for a hatchback and the Xcent can be termed as a Grand i10 with a boot. The wrap around headlights and taillights ad a fluidic feel to the body, the large rear windows allow for a roomier interior and the swage line, being crisp, camouflages the height of this car. Mid-segment cars are not head turners, but Hyundai has done a great job in keeping the design of this car clean and simple.

The side profile sports a plastic waistline molding adding to the contours of the body. One can see that the boot has been integrated well into the body and does not seem disproportionate or out of place. The rear of the car is where one can really see how Hyundai has continued its minimalistic design. The wrap-around tail lamps are small and there is not too much badging on the boot lid either apart from "Xcent" and the variant badge (S or SX). Based on the engine variant bought, either the CRDi or VTVT badges are found on the driver's side quarter fender only. Yes, only on one side. The top variants get 15-inch diamond cut alloys which ad a sporty feel.

Considering the Xcent has the same wheelbase as the Grand i10, Hyundai hasn't really made many changes to the interiors. The dashboard has a clean look with all the buttons feeling in place and easy to access. Hyundai has paid a great attention to detail and has plastered the car with a plethora of features that gives it a step up from the competition.

The center console that houses the 2-Din audio system is fantastic. Apart from having a 1GB internal memory capable of storing at least a thousand songs the system allows you to stream music via aux, USB and best of all Bluetooth. The steering wheel gets audio as well as telephone controls so the driver can easily answer/reject calls and change the music plus increase/decrease volume without having to take his/her eyes of the road.

The Xcent also gets an electro-chromic mirror with an integrated rear-view parking camera and parking sensors. A Hyundai trademark now is adding a push start button to their vehicles along with a smart key and the Xcent doesn't get left out either. The list goes on and on.

Though the Xcent has borrowed a lot from the Grand i10, Hyundai has made sure that the changes made on the interiors are to satisfy the customer's desire to buy a sedan. The air-conditioning gets a climate control system as well as an air ionizer that keeps the air fresh during circulation. The rear seat gets a central armrest with cup-holders. There is a large amount of storage space in the Xcent. All the little nooks and crannies have been utilized for storage. One noticeable difference is that the storage compartment in front of the gear shifter gets a push-lid to cover it up instead of being open like it was in the Grand i10.

There is no shortage of features in the interiors of the Xcent. It feels like a class above the rest on the inside. One place where we feel Hyundai could have been a little more generous is on the trip display screen. The digital display shows two trip meters; average driving time and average speed. Hyundai could have added a distance to empty gauge as well as fuel economy meter as well, especially when they say that both the petrol and diesel are very fuel-efficient cars. So being able to see how good your fuel consumption is would allow for a sense of satisfaction to the driver as well have a gauge of what fuel mileage is being achieved.

The boot in the Xcent is a whopping 407 liters and can easily accommodate two large suitcases as well as a few other smaller bags. This allows for a large carrying capacity. By equipping the Xcent with the biggest boot in the segment, Hyundai dethrones the Amaze when it comes to boot size.

The Xcent comes with two engine options, namely the 1.1-liter three-cylinder U2 diesel engine and the 1.2-liter, four-cylinder petrol Kappa engine. Both the engines are also available on the Grand i10. The three-cylinder oil burner has been tuned by Hyundai to produce 72PS and 180Nm of torque. The diesel engine has an ECU controlled turbocharger that allows for optimum airflow and performance. In no way does the CRDi car feel underpowered with the added weight of the trunk. The increased torque allows for easy accelerator-less driving at low rpms. Considering the fuel is being injected into the engine at a higher pressure, 1800PSI to be exact, the fuel combusts better and allows for better fuel economy. The ARAI figures for the Xcent are 24.4km/l. we pushed this car into speeds with three digits and found that the noise levels were minimal. The engine has been refined to make barely any sounds at higher rpms. The only external sound that could be heard was of tires spinning against the road. The car is insulated pretty well allowing for a quite ride. At low rpms there is some diesel clatter but that is imminent. Factoring the vast amounts of torque on tap at low rpms the slight engine vibrations and diesel clatter can be ignored.

The diesel engine comes mated to a five-speed manual transmission that is extremely easy to handle. The clutch is light and the shifts are definite. The lever is easily accessible making gearshifts very easy and smooth. Being a diesel the engine maxes out at 5000 rpm and reaches the redline mark without any strain. Crossing 100km/h on the highway, this car felt poised and very comfortable even when we reached speeds close to 140km/h. Passing trucks and other vehicles is a no-brainer with this engine. The huge amount of torque permits the driver to be able to pull away even in fifth gear, without having to downshift for more power. Hyundai will also be mating the petrol mill to a four speed automatic transmission that should make the city commute effortless. The petrol engine has some pep regardless of the extra weight added on to the back. It has been tweaked to produce 81bhp of power and 114Nm of torque. This engine has been seen on a quite a few of the other Hyundai cars and has performed great on all the other models as well. It is a quiet engine with a good amount of low-end power. Once again this engine is noiseless at high speeds. The only sound heard once again was just road noise.

Two differences between the diesel and petrol models are firstly the steering response. The petrol car seemed to have a better feel than the diesel. The steering was slightly heavier on the petrol than on the diesel car that allowed for a slightly better judgment when taking corners etc. The second difference is in the gearshift pattern. In the diesel one has to press a button the gear lever and slide it into reverse, which is located on the left of the H-pattern where as in the petrol the reverse position is located at the extreme right, below fifth on the H-pattern.

Hyundai does equip the Xcent with the segment-must option of ABS. The SX variants of the car gets dual airbags as the added on safety feature. The suspension is slightly stiffer which means that bumps are felt and are distinct.

The ride quality is as it should be in a Hyundai, comfortable and stress-free. This does mean that it does feel slightly on the deadpan side, as the feedback from the car/steering is minimal. The large windows and windscreens allows for lots of visibility that means less blind spots.

The Hyundai Xcent has three trims Base, S and SX. The 2-DIN audio system is available from S model, along with Bluetooth and four speakers. There is also metal-finish door handles on the inside, rear AC vents, electrically adjustable mirrors, reverse parking sensor on the mid-variant. The top-of-the-line gets push start and stop, reverse parking camera, electrically folding mirrors, dual airbags and ABS.

In a market that is always looking for more bank for buck, the Xcent is a perfect addition by Hyundai, especially in a rapidly growing segment. Being uber feature laden, spacious and comfortable with good fuel efficiency, the Xcent does delivery in every category. This makes it a very desirable car for the amount of money paid. Some may say that the Honda Amaze has a better build quality but for better build quality those customers would be sacrificing additional features such as Bluetooth and push start etc.

If you are looking at a family sedan that is at par with the market value, the Xcent is the car for you. With a great service team backing you up, there is not too much to worry about when it comes to getting a Hyundai. The Xcent will be a fair player in the sub-four meter mid-sized sedan segment along side it's rivals, the Swift Dzire and Honda Amaze.