The Brio has just completed one year in India and Honda prepares to introduce the automatic on it. We loved the car, when we first drove it before its launch and the affection grew when we did a travel story in Honda’s smallest hatchback from Chandigarh to Jaipur via Mandawa . Inorder, to further diversify the product reach, Honda has now introduced the autobox on the Brio, which will be available in showrooms from the 18th of October. We take a quick spin in the self shifting Brio. Dig in deeper, to read our review. 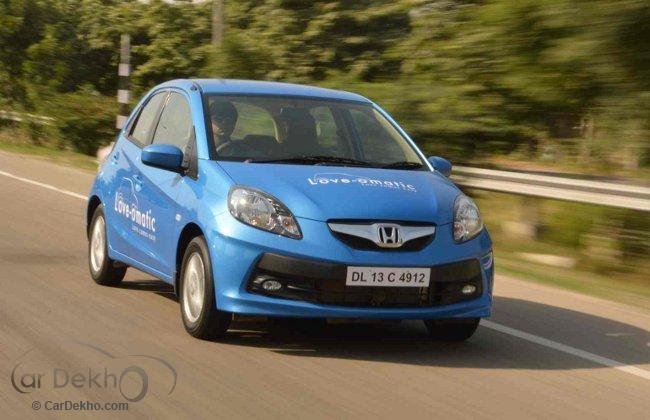 The Brio looks identical to its manual sibling and there is no change externally or internally. It doesn’t even flaunt an automatic moniker on it. Similarly, even the interiors remain untouched. The only addition is that of the new automatic shifter and also the mode of driving on the instrument cluster.

Brio is the latest entrant from the Japanese automaker and is also the most powerful engine in its class on paper. It gets the 1.2-litre i-VTEC mill— that also powers the Jazz— which produces 86bhp of power and 109Nm of peak torque. This engine is so well refined that it feels like Honda engineers have scrupulously tuned it. The snort at low engine speeds turns into a sweet exhaust note as the revs climb up. Brio doesn’t share the same gearing with the Jazz and rather has taller ratios for better efficiency. So even though the power delivery is linear, one need to downshift for quick overtakes.

As predicted by many, the Brio doesn’t get the four-speed CVT, but what it rather gets is a five-speed conventional epicyclic transmission. This is the only car in its segment to have a five-speed self-shifting transmission, as the Hyundai i10 and also the i20 automatic— which is a segment above— have a four-speed autobox.

Being a torque converter, the shifts are a tad slow, but definitely better than competition. The linear power delivery of the engine compromises for the slackness. Driving a manual Brio was a breeze and now with the autobox in the bag, it’s more easier in bumper-to-bumper city traffic. The transmission has the option to engine brake and also to drive in lower gears while driving around bends or uphill. Overall, the hassle of clutching and de-clutching has now come to an end with the Brio automatic.

The ride suppleness of the Brio automatic is the same as the existing Brio. It has a sorted ride as the suspension doesn’t jiggle and disturb the peace of the occupants. Road undulations are well-taken care by the suspension. You can glide over a pothole with a muted thud and the

The Brio on the other hand is the pick of the lot when it comes to the response of the chassis and suspension set-up. Though the light steering wheel may feel artificial to many, the chassis has been well tweaked to be driven flat-out around bends and tight hairpins. The alacrity of the Honda engine does make it a joy to drive it around hills or twisty roads.

Even in the D mode, the Brio drives well on banked roads and turns, and you do not feel the need to shift in lower gears unless you have to drive quickly around sharp turns. Also, the turning radius of the automatic version has been increased by 0.2 metres than the manual as they had to do some repositioning to fit the planetary transmission.

Generally, the autobox costs about Rs 70,000 more than the existing manual variant. However, it seems Honda could price it a tad lesser and the cost of the Brio automatic will be about Rs55,000-60,000 more than existing simple stick shift. We will have to wait until the curtains are raised on the 18th of October. Speaking of the product, the peppy engine and the five-speed autobox makes it an ideal choice for city driving.