The Figo from Ford India was a make or break model in short. The Figo was supposed to be a model on which depended the future of Ford in India and it did just that. The Figo not only got Ford India back in the reckoning in the small car segment but also got Ford more than 20 car awards in the year 2010 which is no mean feat. The Figo's success single handedly showed the entire Indian auto industry what Ford India was capable of and that it should be taken seriously, very seriously. We have with us the super successful Ford Figo Diesel top of the line Titanium variant as our Long Term test car and we live with it day in and out to bring you what it really feels to own the current best seller from Ford. 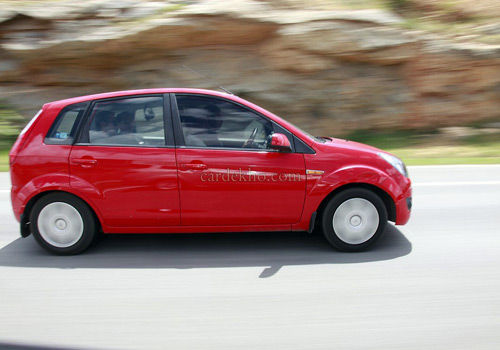 How Is The Figos Engine and How It Drives –

The Ford Figo TDCI is powered by a 1.4litre CRDI engine that is a direct transplant from the elder brother Fiesta. This is a gem of a engine, the Figo we have has clocked more than 16,000kms and there is no sign of it aging. A big part of the success of the Figo is because of this CRDI engine. With 69PS of power @ 4000 RPM and a meaty 160 Nm of torque at as low as 2000 RPM this is a real good performer. As said this is the very same Diesel engine that also serves the Ford Fiesta and has been renowned for its performance and efficiency and now with the power to weight ratio advantage on the Figo its performance and efficiency ratings improve for the better on the Figo. Just for the records Ford has set up a huge Engine building facility on the outskirts of Chennai and their investment after seeing this engine is right on target. Coming back to the 1.4 TDCI engine, this is a highly refined unit and no harshness can be felt what so ever. This is a very drivable engine at low RPMs and power is available at slowest of speeds, just perfect for everyday commuting on busy city roads.

Noteworthy here is the engine roar that is audible and mind you its not a harsh Diesel clatter that we are speaking of but of a nice meaty purr that adds to the sporty acoustics and character. The Figo Diesel as we said earlier is a lot fun to drive on crowded roads, the engine has lots of torque to play at all RPMs.

The Ford Figo on the move, drives in a very sane manner. Power delivery is very linear and not frightening as seen on some other CRDI small cars. It is very evident that this 1.4 TDCI motor is more tuned towards efficiency rather than outright performance and is not at all underpowered at any rev range, nor is there any major turbo lag evident. The Figo TDCI has a very strong sane low end power and a strong mid range driving abilities, just perfect for daily up-downs. The 0-100kmph speed according to Ford officials is 15.8 seconds and we got the Figo TDCI to 100 in 16.2 seconds to be precise.

The Figo’s gear ratios are well sorted and spaced out, and drivability in any gear is near to perfect. We did'nt find any false shifts or harsh gear shifts, this is easily the best gearbox on a small car in this segment. Overtaking was not a problem anywhere on the Figo TDCI with the powerband always available at wide RPM.

As mentioned earlier the Figo TDCI is a fun to drive car, very driver oriented and has one of the best steering feedback that is available in the segment. The steering feels perfectly weighted and this is a big positive for the cars handling ability, it often brings out a grin on the driver. The Figo TDCI handles well and the body roll is negligible and that’s a big plus again for the Figo as compared to many of its rivals that have large amounts of body roll.

Coming to the ride quality, the Figo TDCI has its suspension tuned ideally for the harsh Indian conditions that you all are well versed with. This setup include independent McPherson Sturt with dual path mounts in the front and an semi – independent Twist Beam coils at the rear that crease out the bumpy roads and offer what we found as the best ride quality in this segment. The Figo TDCI Titanium drives on Goodyear GT3 with 175/65 R14 spec Tubeless Radials that play their role to the core in keeping the Figo planted at all speeds. The braking on the Figo is sharp and confidence boosting and not frightening. The front discs and rear drums offer good braking capabilities aided with ABS and EBD to bring the Figo to a secure halt. The biggest USP of the Figo is the drive feel which is very similar to a large sedan. This big car like drive feel goes in a long way in enhancing the Figos abilities. We were often reminded of the big brother Fiesta in many ways in terms of the drive character.

And How Are The Figo's Interiors

The Figo boasts of a large cabin space and this helps in the big car drive feel when the Figo is on the move. The cabin is silent with good NVH levels. Generous amount of space all around with loads of head and shoulder room and decent amount of leg room again is the Figo's another USP. Things like easy to read instrumentation, positioning of the boot opener just perfectly on the right of the instrument cluster, easy to use stereo/FM that also can connect to your mobile phone via the inbuilt Bluetooth module, open-shut mechanism on the AC vents man be small touches but they all add up in increasing the comfort and convenience on the Figo.

The seats are well cushioned and not very soft but near to perfect. Height adjusts on the driver's seat is a great boon for short people. Height and reach adjust on the steering is sorely missed. Front seats offer good comfort and under thigh support for long drives and the use of good seat fabric also increases the comfort level. Neat cubby holes and storage bins spread all around the cabin that come handy every day. The bonnet opener is situated on the left side which means if you enter a mall security check and are alone so you need to unbelt your seat belt and stretch to the left side to open the bonnet to open it. Door pads have bottle holders in them that can stalk 1 liter bottles easily. The arm rest on the door pads are neatly designed and offer good comfort during long drives. Rear seats offer good back support and under thigh comfort. The rear seats on the Figo have unified head-rests that is again a neat touch. The grouse here at the rear seat is the missing 40-60 split folding seats. The rear seats do fold down but you can't have them go down separately. Leg room at the rear is more than adequate even with the front seat set back at maximum. The Figo has one of the largest boot in the segment. 284litres to be precise, compare that to the Maruti Swift that has 213 litres of boot space and you will have a better picture of what we mean. You want more boot space then just fold down the rear seats and you get 370liters of increased space at the rear.

Keep checking this space as we go ahead with our Long Term Figo ownership review and speak more about the interiors, exteriors and touch all the corners of this successful car and try to find out its true virtues in our next update.

Things that could have made the Figo Diesel still better (Things we missed).

The Bonnet Opener On The Drivers Side.

Height Adjust On The Steering Missed.

Front Fog Lamps Missed (The Titanium Should Have Got Fog Lamps).

No alloys on the top end variant.

Things We Just Loved On The Figo Diesel (Things that make the Figo good).

Big car feel with lots of space inside.

Hi Efficiency on the TDCI engine.