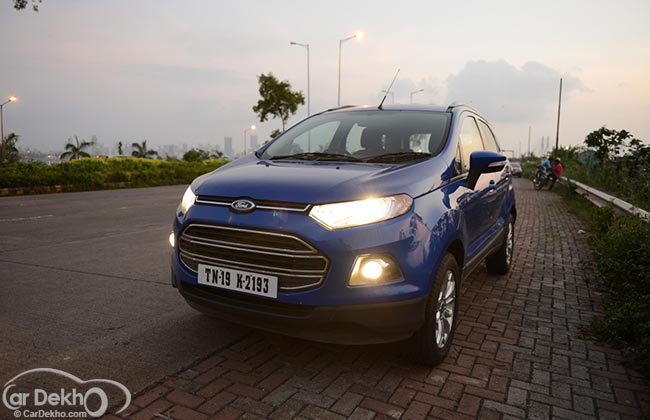 The compact SUV segment is one of the fastest growing in Indian car market and there is no reason why it shouldn't? Considering the road conditions, the traffic sense, SUVs are generally the pick of the lot. As these are compact, they are perfect for city use, as they are easier to drive, manoeuvre and most importantly park. The Duster was the first SUV to enter this segment, soon the Eosport followed. We get our hands on the Ecosport and tell you how does it fare in a long run.

The biggest USP of the Ecosport is its compact size. It does look large, but in reality it is under 4 metres, making it as long as the Hyundai i20. This is a fact that several people haven't realised. This has made the costing of the Ecosport lesser than other SUVs as it gets the sub 4-metre benefit. The Ecosport has wheel at each corner, which gives it a better approach angle. This is one reason why it doesn't scrape below and to top it up it has a ground clearance of 200mm.

The reverse parking sensors on the Ecosport further add on to making it easier to park as well. However, the turning radius of the Ecosport isn't as small as one would have expected it to be. This is one reason why it is a tad difficult to park in tight spots despite sub 4-metre length. This also makes it difficult to manoeuvre on busy streets.

The Ecosport that we are driving is the 1.5-litre diesel variant and it comes mated to a five-speed manual transmission. This engine churns out 90bhp of power and this is the same mill that also powers the Fiesta. There is the diesel clatter melodrama, however this is mostly on cold starts. This settles in once the engine has warmed up. The Ecosport has some amount of turbo lag and it is prominent.

The engine struggles to pull below 2000rpm and one needs to downshift every time, for more power. Once above 2000rpm, there is absolutely no issue. The Ecosport does a phenomenal job as the torque spread is linear and even the power produced by this engine is just perfect for city. It has a strong mid-range. Overtaking in city or on the highway isn't a difficult task on the Ecosport, as it does the job well.

When on an open-road, the Ecosport doesn't show any signs of struggle and even overtaking is easy. This compact SUV comes mated to a five-speed manual transmission. The fuel efficiency of the Ecosport however isn't very impressive in the city. With purely city driving in Mumbai, the Ecosport returned an efficiency of 13.5 km/l, which is much less than that of the Fiesta, which returned us in excess of 15km/l in city with similar driving conditions. We weren't heavy on acceleration and it was more of light foot driving in the Ecosport. Next report we speak of the space that the Ecosport offered. Wait for our next report.

The Ecosport is spacious on the inside, despite the compact outer dimensions. The front row seats are spacious and comfortable. The seats aren't as large as the Fiesta, which we really appreciate, but since the Ecosport is taller, the thigh support had to be reduced. The rear seats are also comfortable and there is sufficient space for the rear passengers. Another good thing of the Ecosport rear seats is that can be reclined as per the requirement. That makes the rear seats more comfortable than competition. The boot does look small, but in reality it is sufficient for three suitcases. We learnt this, when we drove the Ecosport to the airport with ease as the boot swallowed all-the luggage.

The Titanium+ comes loaded with several features like leather seats, keyless entry, push start, six airbags, Bluetooth, aux and USB connectivity. There are several cup and bottles holders and there is a lot of stowage space too, for example you can fit a laptop under the co-driver's seat, there is a sliding draw. The Ecosport is definitely good at this and what we appreciate is the ease to use the features. The only thing we wish, was that the number of buttons on the centre console could be reduced and also the AC vents had an option to shut completely if not required by certain passengers.