Published On Apr 15, 2021 By Nabeel for Toyota Fortuner

The Legender commands a premium of Rs 3 lakh over the standard Fortuner 4x2 AT. What's that premium for and is it worth the spend? 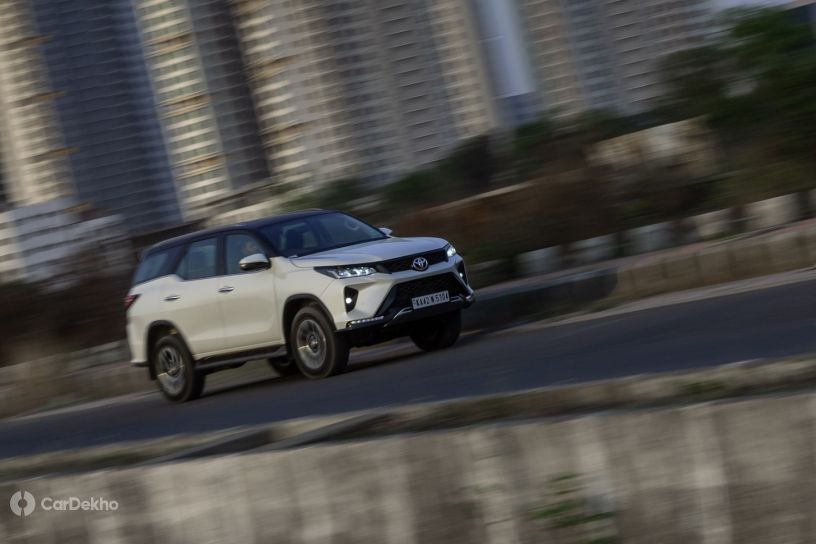 The Toyota Fortuner’s dominance in the market and on the road has never been questioned. Its persona of being associated with the ministers of the country has given its white colour extra importance on the road. Keeping all of this in mind, Toyota launched the Legender variant along with the 2021 facelift model. It packs aggressive looks, added convenience features, a 2WD diesel powertrain and most importantly - it is only available in a white dual-tone body colour. However, it is the most expensive Fortuner variant, more expensive than even the 4WD. Can the experience make up for the added cost?

This is one area, and probably the only one where the Legender feels bang for buck. The road presence of the Fortuner will enthral even older Fortuner owners. The new Lexus-inspired bumpers with the grille finished in black, sleek new quad LED headlamps with waterfall LED light guides and the dynamic turn indicators placed lower down in the setup, all make for an aggressive-looking and head-turning SUV.

New in the Legender is its dual-tone white and black color and new alloy wheels. These 18-inchers are exclusive to the Legender and suit the SUV well. However there are other 18s (4WD) and 17s (2WD) in the standard Fortuner range as well.

The revised taillamps look sleeker and sportier than before. The Legender badge is a subtle black on black lettering over the license plate and then another one to the left of it. Overall, the 2021 Fortuner does look better than the outgoing one, and the Legender is definitely the head turner of the range.

The interiors too have seen a mild upgrade from the older Fortuner. And while the overall layout has remained the same, the black and maroon upholstery suits the Rs 45.5 lakh (on road price) status better. The instrument cluster has also seen a mild upgrade and looks better.

Thankfully, there's more to the package than just aesthetics. Exclusive to the Legender are handsfree tailgate release, a wireless phone charger and rear USB ports. The Fortuner also now gets connected car technology which includes geofencing, vehicle tracking and walk-to-car. The infotainment system too has seen an upgrade. The screen size is still 8 inches, but the interface is better. With larger icons and different themes and colors, this one is a lot easier to use. Plus, it now supports Android Auto and Apple CarPlay, two essential features which were missing from the Fortuner.

The downside of this setup is the sound system. The four front speakers are still acceptable, but the two at the rear are simply not acceptable in a Rs 45 lakh SUV. The 4WD variants of the Fortuner get a premium JBL 11-speaker sound system which includes a subwoofer and an amplifier. Why the most expensive, urban-focused variant has not been given this feature remains a mystery. And yes, still no sunroof.

Other features like the powered front seats, powered tailgate, dual-zone climate control, one-touch tumble and fold second row, comfortable second row seats, third row seats spacious enough for teenagers and kids with their own AC unit are still all there. There have been no changes to the space offered in the cabin, and to check that out, watch the video comparison review below.

The biggest change has been done to the diesel powertrain of the Fortuner. While the unit is still the same 2.8-litre one, it now makes 204PS of power and 500Nm of torque, which is 27PS and 80Nm more than the outgoing model. The manual variants, however, make 80Nm less. Like we mentioned at the start, the Legender is only available in the diesel AT 2WD powertrain. And this is the most sensible powertrain for urban usage. And alongside the BS6 update and the increase in the torque output, the drive experience has become sweeter. If you are one of the few who wants a petrol-powered Fortuner, the 2.7-litre is still present in the lineup, but only in a 2WD configuration, as the standard Fortuner.

The cabin insulation feels better on this Fortuner as there is less engine noise creeping into the cabin. This new tune and the BS6 update has added more refinement as well. The engine revs smoother and the added torque makes city driving more effortless. Despite weighing 2.6 tonnes, the Fortuner now feels like a compact SUV in the way it picks up speed and cruises in the city. The engine barely feels stressed and the torque output feels creamy and plenty. Quick overtakes are easy and the Fortuner attacks gaps with an intent. Even the gearbox logic is well tuned with timely downshifts. However, these could have been a bit quicker for a properly sporty experience. You can always take manual control with the paddle shifters.

This is true for both Normal and Sport modes. The Eco mode dulls down throttle response and generally makes the Fortuner feel a bit sluggish to drive. However, staying in that mode will give you 10.52kmpl in the city and 15.26kmpl out on the highway, so there is a case to be made. Stay in the sportier modes and the acceleration will not disappoint even on the highways. In fact the Fortuner sits at 100kmph at just 1750rpm and cruises calmy with plenty in the tank for overtakes. Outright performance is impressive as well, with a 10.58s time for the sprint to 100kmph and a 6.71s time for in-gear acceleration from 20-80kmph. These times challenge most sporty hatchbacks we have in the country.

The Fortuner Legender impresses with its composure over bad roads. The 2WD powertrain feels better settled than the 4WD one over the bad patch as it weighs 125kg less. There is almost no body jitteriness creeping into the cabin and the suspension also keeps the harshness in check. This, coupled with the better cabin insulation, makes the Legender quite a comfortable SUV on the roads.

The same remains true when the roads end and you decide to take the less beaten path. The Legender will keep its occupants comfortable as long as the driver is able to keep some momentum. At crawl speeds, the surface is a lot more communicative. And also, you can manage a light bit of off roading thanks to the clearance and torque, but steer clear of soft sand or deep muck as you will be left spinning the rear wheels. The 4WD variants now get lockable differential to further aid their off-road abilities.

In terms of handling, the Legender gets a big advantage with the steering setup. Now featuring drive-mode-dependent weight adaptation, the steering feels light and easy to turn in Eco and Normal modes, and weighs up well in Sport mode. The best part of this setup is that the jitteriness and surface feedback that was present on the older Fortuner’s steering is now 100 percent gone. As to body roll, it is a 2.6 tonne body on frame SUV and that is felt through the corners. Be gentle while cornering and it won't throw up any unpleasant surprises.

The Legender feels thoroughly impressive in the way that it looks, it drives, the comfortable ride and the added features. In a nutshell, all the changes turn out to be improvements that new owners will appreciate. And yes, apart from the weird miss of the premium sound system, everything feels in place for the Legender to be the ideal Fortuner for an urban family. However, that is before the price comes into the picture.

The 4x2 diesel automatic Fortuner is priced at Rs 35.20 lakh. And at Rs 37.79 lakh, you pay Rs 2.6 lakhs more for the 4WD automatic. Acceptable. However, the Legender, a 2WD SUV, at Rs 38.30 lakh, is the most expensive Fortuner variant. It’s an absurd Rs 3 lakh more expensive than the standard 4x2 automatic and even Rs 50,000 more expensive than the 4WD Fortuner. And given its price, it's hard to justify the jump over the standard SUV for a handful of features and differently styled bumpers. If you have the extra money and absolutely love the Lexus-inspired looks, the Legender does make sense. Otherwise, the standard 2WD Fortuner remains the pick here.

High price for extra money for look it's.

High price for extra money for look it's.