Published On Sep 05, 2013 By Rahul for Volkswagen CrossPolo

The attraction towards compact SUVs is on a rise amongst Indian car buyers. The Ecosport has received an overwhelming in its initial stage, the Duster has been a hit too. The Volkswagen Group has a different thinking and the company has introduced the rugged version of its hatchback the Polo and this product is known as the Cross Polo. 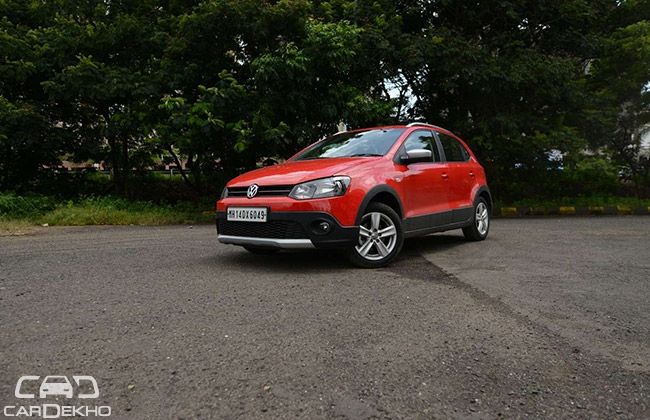 This is a similar concept to what we had seen on the Fabia as the Fabia Scout. This is definitely a new segment and there are more vehicles coming in this segment— the Fiat Punto Adventure. We try out this new vehicle and find if it has potential for our market.

The Cross Polo has a lot of differentiating factors from the conventional Polo hatchback. To begin with, it has a new front grille with a single horizontal chrome slate, redesigned front bumpers, matte black side cladding, and the same theme continues on the rear bumper also.

There are the Cross Polo decals on both the rear doors, silver rail roofs that increase the height of the vehicle by 21mm. This also has a different design of alloy wheels, halogen headlamps and silver coloured ORVMs. You can’t miss out on the Cross Polo in a crowd of same colour Polos, even though it has a Polo badge at the rear. The Cross Polo definitely has a lot more road presence, we believe maybe daytime running LEDs could enhance this even more.

Volkswagen had recently upgraded the Polo interiors and the same are carried forward on the Cross Polo. However, the Cross Polo gets “Livon” titanium black upholstery. It gets 2 DIN music system that supports aux, USB, SD card and Bluetooth connectivity. There is also automatic climate control and electrically adjustable rear view mirror.

The Cross Polo has the same body shell of the Polo, and yet it feels higher than the regular Polo with the same ground clearance. This is due to the reason that the seats in the Cross Polo are higher and you sit like the way you sit on a chair. Even the instrument panel is raised along with the seat.

This makes the Cross Polo have a better road vision. Due to higher seating the rear seats feel little more comfortable, but the knee room still needs improvement. The boot size is still the same as the Polo.

The Cross Polo comes with a 1.2-litre diesel mill that churns 74bhp of power and 180Nm of peak torque. This is the same oil burner that even does duty on the Polo. It is a three-cylinder mill and the four-pot version of this block powers the Vento and the Rapid. One thing that we don’t like about this engine is the noise it produces. The diesel clatter is loud, especially on cold starts and idle. The power delivery isn’t that smooth as this mill has turbo lag. It is only once you past 1600 rpm and the turbo kicks is when the power comes in. The Cross Polo has a different final drive ratio that makes it more drivable than the Polo hatchback. We had expected more power on the Cross Polo, but it seems Volkswagen India considered this to be sufficient. The gear ratios remain the same. The power produced by this engine is sufficient for city driving, however out on the highway, when you give it the beans you do feel the lack of urge in this oil burner. It does feel out of steam when you need to push it extremely hard.

Cross Polo is a comfort cruiser on the highway and can return up to 18-20km/l if you cruise between 80-100 km/hr with gradual acceleration. The 1.2-litre engine is highly frugal and we have experienced the same in the Polo as well. In the city, we have got a figure of about 15.5 km/l with bumper-to-bumper city traffic and normal driving.

The clutch on the Cross Polo isn’t heavy, but is yet a bit too deep for your left foot. But the positive aspect is still the enhanced drivability. The final drive ratio has been increased for better drivability.

The Cross Polo has the same Polo chassis, with the same ground clearance, with the same size wheels and the same engine. Still, the ride quality of the Cross Polo is much better. It has been softened and it is a lot smoother than Polo. Drive it on rough roads and the suspension does a good job of soaking up the road shocks and avoids it from filtering it into the cabin.

Despite the softer suspension, the handling is good. The Cross Polo can easily take on more powerful engines without any issue. However, this being a Cross Polo we were let down by the fact that it has the same ground clearance. A bit higher ground clearance would have meant better capability to drive on extremely bad roads and even the size of the tyres is as large as we had expected.

The Cross Polo is the Polo on steroids when it comes to styling and driving position. In reality, it is the same Polo chassis with the same power. Frankly, this is what most of the Indian buyers like and Volkswagen has done exactly the same for these buyers. We will recommend you the Cross Polo only if you need a high-quality hatchback and want to sit higher or need some road presence.  Maybe some amount of ground clearance and more power under the hood could change the game for Volkswagen India.