Think SUVs. Think of something that’s massive and appealing. Something that has road presence, with the large grille and do not mess with me look. 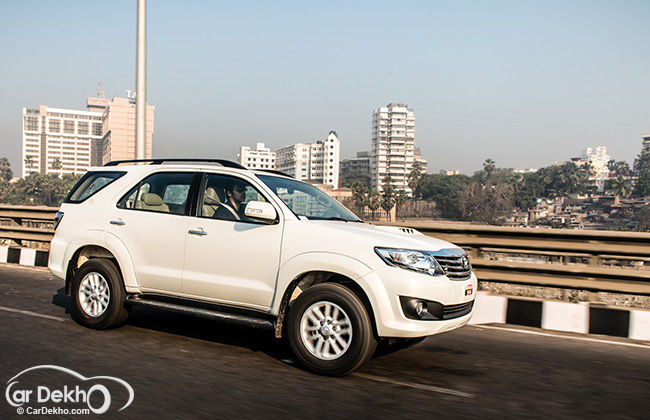 This is want an Indian generally expects from an SUV. A vehicle that can bully the smaller ones. This is why the demand for SUVs is growing in India.

One successful product from the Toyota yard is the Fortuner . The SUV was success from the word go. There has been a steady rise in its demand since its launch in our market.

A year ago, the company had revamped its best selling products— the Innova and the Fortuner. However, recently the company changed the four-speed automatic transmission to a five-speed as its competition stiffens. We are amongst the first few to review this new version.

There hasn’t been any ornamental change on the Fortuner, however sometime ago the Japanese manufacturer beefed up the styling cues of the Fortuner. The new front grille is now larger than the previous version, which increases the appeal, making it look like a smaller grille of the Prado and the Land Cruiser .

This design change has been implemented across the Toyota family and even the Camry gets the same face. The headlamp design had been tweaked to give it a better stance than before and make the design flow with the re-designed front grille.

Step into the Fortuner, and you realise that it offers decent space. The materials used on this Fortuner are much better than the first vehicles that we had driven and the fit and finish is of high quality.

Everything is built to last and assembled to not rattle, just like any other Toyota. The quality of material and even the brownies on the inside are good.

The space in the front two rows is decent with enough knee and headroom to offer. The third row is a bit tight and good enough for kids.

The boot isn’t that large when all the three rows are upright, and a carrier will be must to take weekend luggage if seven people are travelling. There are sufficient stowage places in the Fortuner.

We are reviewing this Fortuner, as it has now got a five-speed automatic transmission, replacing the four-speeder. The Fortuner retains the same 3.0-litre four-cylinder engine that agitates 170bhp of power and a torque of 360Nm.

This oil burner has been torquey, capable to pull almost at any rpm without any hiccups. It is this drivability factor that has encouraged people to buy the Fortuner, apart from its looks and road presence. The only niggle in this mill, is the diesel clatter.

The added fifth gear in the epicyclic transmission has done made driving more joy. The response has been improved up to a certain extent, but it is more of the spread of torque that has delighted us.

Not only the drivability has been enhanced, but also the acceleration has been improved. The 2WD is lighter and quicker as well, but the automatic comes only rear-wheel drive and no 4x4.

The driving dynamics of the Fortuner hasn’t been changed and it is the same as the revived version of the Fortuner. The ride is supple, however it gets a bit bumpy and skittish at high speeds. The low speed ride is good and well settled when driven within city speed limits.

The Fortuner is gigantic and has high ground clearance, so it has some amount of body roll. The sponginess of the brakes is still present, however the brakes do bit progressively and are much improved than the previous Fortuner.

The Fortuner has always been a good product with road presence, spacious interiors, good build quality and powerful engine.

Apart from this, what you get is the trust of maintenance-free products, which Toyota has built up in its entire life span of business.

The Fortuner is expensive when compared to competition, but the five-speeder is a better buy and the extra initial investment means stress-free ownership experience.