Despite a few niggles, the Zest diesel AMT is just the perfect sedan to have for long city commutes!

As I swapped keys with my colleague for the long term Tata Zest AMT about a month ago, I couldn’t help but feel a sense of relief. Our new office in Pune is a good 20km from my house and the drive is mostly through narrow, congested city roads. The diesel Zest automatic is then just the car to have I thought to myself! 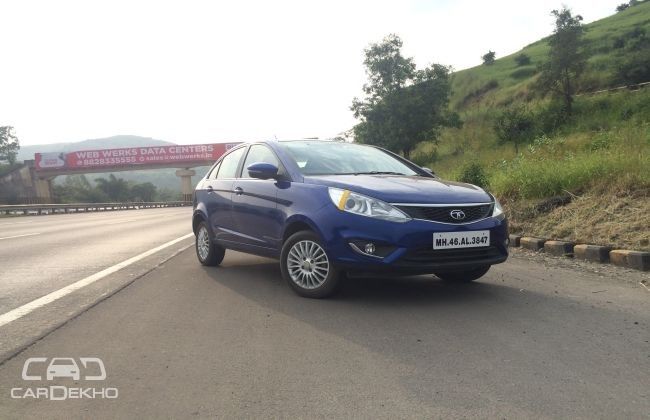 However, my initial enthusiasm wore down a bit as the Zest AMT’s quirks began to emerge. Unlike regular automatics, the Zest doesn’t move forward on its own upon slotting into ‘D’. You have to press the accelerator to get going. On the move, the gears upshift with a slight hesitation typical of most AMTs which makes overtaking a bit tricky. I usually switch to manual mode and then downshift to overcome this problem. The most unnerving bit about this car, though, is its tendency to roll back on inclines. And if you are ever caught in a traffic jam over a flyover, good luck trying to keep the Zest AMT planted. I figured keeping one hand on the handbrake and a light foot on the throttle constantly is the only way around in such situations. Of course, it’s not the most reassuring thing to do and I wish the Zest AMT came with a hill-hold function.

Another bugbear in the Zest is the sheer lack of storage spaces. There’s one cupholder in front of the gear lever which usually ends up becoming my phone holder. There is a space under the parking lever to keep the phone but it isn’t the most convenient spot. The door pockets too are rather narrow and can only hold a 500ml water bottle.

The steering is a bit too light for my taste and doesn’t offer adequate feedback. In the city, though, the light steering makes manoeuvring the car through traffic, taking U-turns and parking a breeze. One thing that I appreciate in the Zest is its smooth, comfortable ride. Pune roads can give the moon a complex but the Zest takes all potholes and broken roads in its stride with relative ease. The cabin is also roomy to accommodate five adults in reasonable comfort and the 390 litres boot space is among the highest in the segment. It easily swallowed large handis of biryani and a dozen other snack bags that I had to carry to a house party recently. Other than that, the AC is super strong and chills the cabin in no time. The infotainment system syncs with my smartphone effortlessly and lets me make/take important calls through my one-hour commute to work. When not on phone, listening to music on the rather impressive 8-speaker audio system is a good pastime.

But the thing that has really put a smile on my face is the Zest AMT’s fuel efficiency. The onboard fuel consumption display reads 15.5kmpl currently and that says a lot about the car considering most of my driving is limited to the city. With a full tank, I need to revisit the fuel bunk only every 15 days or so and that’s a huge relief especially in these times of demonetisation and cash crunch!