Can the Nexon crack the sub-compact SUV segment for Tata in the first-go? 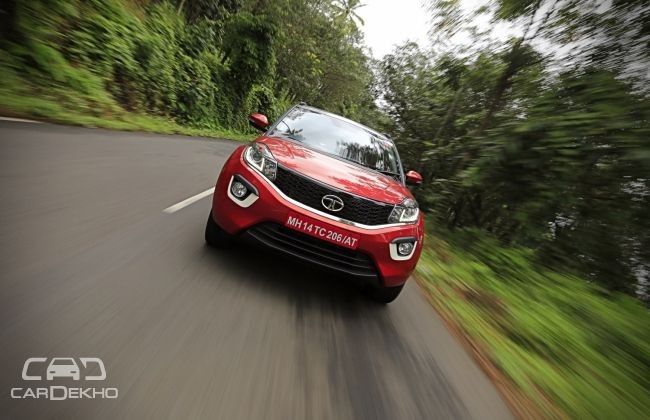 Update: Tata Nexon has been launched at Rs 5.85 lakh

The Tata Nexon is the latest entrant in the highly popular sub-compact SUV segment. It is Tata’s first attempt in this space and going by the way it looks, it’s not your conventional small SUV. The sub-4m SUVs that the Nexon competes with are aggressively priced, and pack in more practicality compared to the average premium hatchback. So, the Nexon has to deliver on at least these counts to excel.

The Nexon’s distinctive design sits on a platform that also underpins the Bolt and Zest, and that’s not a bad thing. But, there’s lots that debuts with the Nexon including a new 1.5-litre diesel engine and a turbocharged 1.2-litre petrol. Like we have come to expect from modern Tata cars, the Nexon is also packed with a lengthy feature list. Does it all add up to a package that can rival the established players in the segment? More importantly, can the Nexon crack the sub-compact SUV segment in the first go? Let’s find out.

The Tata Nexon is neither a sub-compact SUV nor a hatchback on stilts. It’s a crossover in the true sense. The SUV traits of the Nexon are ground clearance, which at 209mm is comparable with the Renault Duster, and large 16-inch wheels. The high-stance is married with a coupe-like sloping roofline that rakes sharply like that of the Range Rover Evoque.

The unconventional design is eye-catchy, which should make it hard to miss when parked beside other hatchbacks and compact SUVs. The top-spec XZ+ variant of the Nexon that we drove sported a contrast-colour roof in steel grey with both red and blue exterior colours. The signature element is an off-white plastic trim that runs just under the greenhouse on the side. It continues at the rear too, but that’s paint and not plastic. Tata could have done away with it, but then, they could have overdone it too, which they have not.

Apart from the grey roof and off-white sash, there’s another contrasting element on the outside – the black plastic cladding. It does its job of making the Nexon look rugged and high-heeled quite well.

Look straight into the Nexon’s eyes, and you’ll get a hint of Tata’s ‘Impact’ design. The front grille’s top line extends into the headlamps, and onto the side. That’s the ‘humanity line’ in Tata lingo. The Nexon’s design is, however, more aggressive than its siblings. The elements that add to the bold front look are pulled back projector headlamps with LED daytime running lamps, high-set fog lamps, a large front air intake and flared wheel arches.

While the Nexon looks SUV-ish from the front, the rear is more hatchback-like. The high ground clearance is hard to miss, and the stock tyres (215/60 R16) look wide for a vehicle of the Nexon’s size. The faux skid plate on the rear bumper adds some ruggedness. There’s an off-white and glossy black element around the clear-lens tail lamps that adds quirkiness to the design, but you get used to it with time.

The Nexon’s interior has three prominent layers. The upper portion is finished in dark grey plastic, and its quality is on par with its peers. The middle layer gets an aluminium finish, and it looks particularly upmarket. The thickness and solidity of this layer throughout the cabin makes you feel like you’re sitting inside a more premium car. The third and the lowermost layer is a plastic of greyish shade of beige. This plastic is hard to touch, and the fit and finish levels aren’t too high either. For instance, the glovebox requires more than one attempt to shut, and the fit on the lower portion of the doors is questionable, especially around the door pockets. These two are probably the only touch points where fit and finish feels compromised. Otherwise, Tata has managed to do a good job of ensuring satisfactory quality levels at contact points.

Sitting atop the Nexon’s dashboard is a 6.5-inch Harman infotainment system that’s fixed to the dashboard. There’s simply no missing it. More importantly, it feels high quality and well thought out. The display is crisp and readable even under harsh sunlight. It’s only the camera display that is a bit grainy. However, that must have more to do with the output of the camera than the screen itself.

The user interface is friendly and easy to use as it gets hot spots at corners for quick access to functions like air con settings, audio source and the mega menu. The touchscreen isn’t the most intuitive, and there’s a slight delay every time you operate it. However, it doesn’t skip inputs much. It’s quicker to respond when you use the physical buttons and knobs, which Tata has thoughtfully placed well within reach to operate on the go.

Tata intends to offer Apple CarPlay at launch, and the test cars we drove only featured Android Auto. The driver side instrument binnacle is simple in terms of design and gets a multi-info display unit between the speedometer and tachometer. You get two trip meters, average fuel efficiency display, distance to empty and the usual readouts there.

The centre console extends from under the central AC vents and goes all the way to the rear. Apart from the automatic climate control knobs, it houses a USB and an AUX port and the Drive Select knob as well. It also gets a pair of cup holders that can be shut with a Tambour door, which is a roller shutter that you see on some of the higher-end cars. Visually, it leaves you impressed. However, the cubby holes are an ergonomic failure: it’s too deep and crammed to be used for keeping and taking out cups. Move further behind, and there’s the armrest that opens up a small glove box with enough space to keep your smartphone and your wallet. This should have ideally been the place for having USB and AUX sockets. The centre arm stretches all the way to the rear cabin and houses air con blowers for the rear passengers.

The Nexon’s cabin is so comfortable that it deserves a special mention. To make things clear up front, the Nexon is a car best suited for four. And when we say that, it doesn’t mean that the cabin is not spacious, just that the rear seats are designed such. So, while you get a bench at the rear, the seats are properly contoured buckets for two passengers. There’s a central armrest which folds up in case you wish to seat a third passenger. But you wouldn’t want to do that unless you’re doing short distances.

Other than that, the Nexon’s cabin appears to be one of the most comfortable cabins in the sub-4m vehicle category. The steering is adjustable for rake, the driver’s seat is height adjustable and provides excellent lower back support. So, it's easy to get into a good driving position. The bucket seats are big enough to accommodate people of varied shapes and sizes, and the extra under-thigh support just makes things more comfortable.

The same goes for the rear seats too. Think of the two seats at the back as captain ones (yes, they’re so well defined in terms of their design), and you sit snug into them. The seat back angle is such that it is set into comfort mode by default. The regions around lumbar and under-thigh have been given more cushion in comparison to the other places, and the seats just feel made-to-order.

This has to be Tata’s best diesel engine till date, and it can very well be considered one of the better diesel engines in the compact car space. The engine makes 260Nm of peak torque at 1500-2700rpm and 110PS of maximum power at 3750rpm. On paper, it’s the torquiest unit in this class, and the fact that it’s not completely dead below the max torque range makes it all the more special. It offers you the flexibility to drive it in 3rd gear at speeds of around 30-40kmph without the need to downshift, and it also does about 80kmph in 2nd gear at around 4000rpm (redline starts) without feeling harsh or stretched.

The petrol engine, however, isn’t as exciting and refined as the diesel unit. So, while the diesel engine is responsive even at low rpm, the petrol engine feels quite sluggish, and in case you’re driving with a full house, the progress gets much slower. The petrol engine hits the meat of its powerband just around 3000rpm and not 1750rpm, where max torque starts to kick in.

The petrol engine is not free revving in nature and relies more on torque to pick up pace. The torque band is wide and the Nexon continues to build speed even above 4000rpm. It’s surprising that this engine too doesn’t feel rough or strained around its 5500rpm redline. The engine note, in fact, starts to get sportier once it crosses 3000rpm.

The Nexon gets three drives modes – Sport, Eco and City, and all the three vary the character of the engine so much so that you can actually make use of them wisely. While the Sport mode lets loose all reins, the City mode makes the engine feel slightly strained as you rev high. The Eco mode amplifies the restraint a bit more. The change in the engine’s character is so much that you tend to upshift at a lower rpm when not in Sport mode.

Speaking of shifts, the 6-speed manual transmission is not the slickest of units but slots in with assurance every time you shift the cog. The gear throws are a bit long, but the clutch is light.

The Nexon gets McPherson struts up front and a twist beam setup at the rear. The ride is soft and because there’s not much body roll, it feels plush on the inside. It deals with potholes in the manner of bigger SUVs. So all you feel inside is a toned down thud and some cabin jerk that settles down pretty quick. The diesel Nexon is 68kg heavier than the petrol one, and the added weight somewhat results in keeping the cabin slightly more stable when going over a rough patch.

The diesel Nexon pays the price of the added weight when it comes to handling, but not by a big margin. The difference lies in the fact that the diesel Nexon tends to understeer slightly when you get into a turn while the petrol Nexon feels sharper in comparison. Overall, the Nexon feels quite confident on the road, and stability at highway speeds is not a concern either.

With discs at the front and drums at the rear, it feels confident when braking hard. But, the brakes don’t offer instant bite. So, it requires you to vary the braking pressure according to the situation.

The Nexon’s loud styling might not appeal to all, but will definitely click with those looking for something hatke. The feature list is on par with its immediate rivals, and there are clever touches (like the umbrella holder and the activity key) that make it stand out. Add to the mix the torquey diesel engine, and the generous cabin/boot space, and Tata does look like it’s on to something here.

Yes, quality control could’ve been slightly better and the petrol motor could’ve been a notch more responsive. That said, neither of these are reasons to rule the Nexon out completely. At an expected price tag of Rs 6 lakh to Rs 9 lakh, it does spell trouble for the contenders in the sub-4-metre SUV space.