Tata Motors has been put in the global limelight when it took over Jaguar Land Rover in 2008, however before that the company had its fair share of global coverage when it unveiled the Tata Nano. The global media was curious to see and understand how did Tata manage to pull out a product at this price. The promise of introducing a car that will be a car for the masses was fulfilled by Ratan Tata. Now, about 5 years after its launch, it gets some upgrades. We drive the Tata Nano Twist and tell you what is new in it. 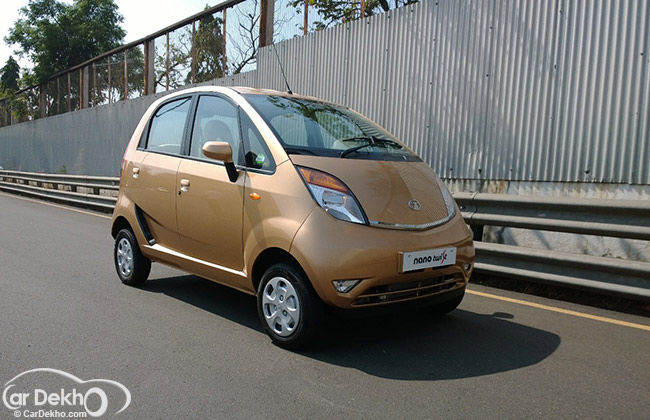 Generally, the first-time car buyers prefer a subtle design and Tata has ensured that with the Nano. It isn’t too trendy or overdone design. The styling s more of cute and it is available in trendy colours too. But there are a lot of new add-ons if you consider today’s Nano from back then when it came out.

It comes in colours like dynamic blue, and a new purple colour has been introduced too for the Twist. It has the chrome strip at the front and the rear that contributes to some upmarket feel, especially in stylish colours. Now, there are full-wheel caps on the Nano and there is the new Twist badging on the Nano that makes it differentiate from the conventional models. There are more holes in the rear bumper for hot air to pass out even more easily.

Tata has been upgrading the interiors of the Nano every year and this year too it has done some changes as well. The Nano Twist has a new instrument cluster. This cluster has average fuel consumption, distance to empty, trip etc on it. There are some more changes as well for the driver. The positioning of the pedals has been changed and they are bought closer in. The position is also more horizontal than before.

The Nano Twist retains the twin glove box covers, new music system with Bluetooth connectivity and four speakers. The padding on the engine cover is also thicker for lesser heat dissipation. The boot however is small to hold a small bag only and maybe a couple of backpacks with it. Well, that’s about it when it comes to the boot space of the Nano. But for city use, we aren’t sure if you want a lot of boot space. There is just one issue now. As the pedals have been moved, the steering position might be a bit more closer to your thighs and you might feel that the steering should have been a bit higher too. The Nano Twist also gets keyless entry now as a new add-on feature.

The engine on the Nano Twist is the same as before. It is a 624cc two-cylinder petrol engine that produces 37bhp of power. It had received a bump in power when it was upgraded a couple of years ago and also there was an increase in its fuel efficiency as the gearing was made taller. As per the ARAI cycle it returns 25km/l, which is good for a petrol car. Now, back to the performance. 37bhp might not sound impressive, but when you consider the weight of about 600 kilograms, it is just perfect for it. The power-to-weight ratio is good enough and it does a fair job in the city too.

When driving within the city, you never really run out of gas. The Nano can easily touch a speed of 80km/hr, which is more than enough for city driving. This is what it has been made for and it delivers it perfectly. The drivability is city is absolutely no problem and even on a two-lane highway it does well. It is only on expressway is when you feel you had a higher top speed.

The gearshifts are also a lot smoother than before and even the clutch is more convenient as they have changed the stiffness of the spring, for that non-jerky drive.

This is where the Nano has undergone a major change. It now gets power steering for easy maneuverability. As power steering eats up some of your engine power, this is electric for the least load on the engine. It is extremely and easy to use in the city. The only drawback that the Nano had was of the power steering and Tata has finally heard that and implemented it on the Nano Twist.

Now, it is even easier to make those turns and utilize the shortest turning radius of 4 metres. The Nano has stiff suspension due to its short wheelbase and tall design. Due to this, the ride is a bit stiff. The smaller tyres add to the choppiness in the ride. It doesn’t feel that bad and the suspension does a decent job still. The Nano feels like it tilts a lot on turns, but that is because of the fact that it has a lot of visibility and you sit high.

The Nano has been an engineering marvel and possibly the best product that Tata has ever made. Its sad to see that such an excellent product didn’t win the hearts of several. However, Tata has taken care of all the issues of the Nano and now it is a fantastic product to procure.