Mini Cooper Countryman S - The not so Mini car

The revolutionary Mini Minor was a car that was known for its dimensions. Designed in a period when the cars were long and in true terms were unaffordable for the common masses. There was a challenge for the British engineers, to build a car with small dimensions that is spacious and is also reasonably priced. The team accomplished its mission and the result was a small car that had multiple innovations in it. This went on to become an iconic brand, and today it enjoys the royalty. 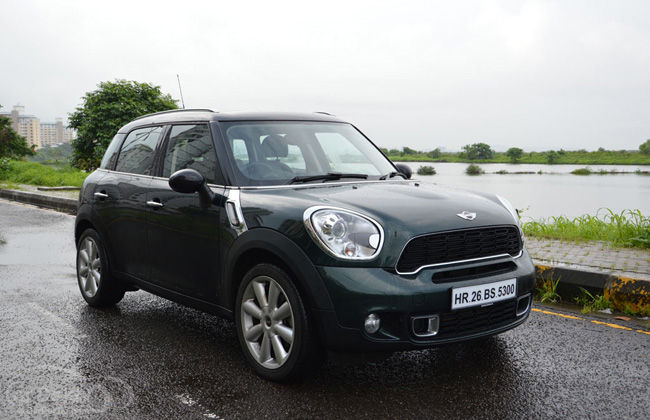 Later on, the brand was procured by BMW and the German auto manufacturer diversified the Mini Cooper range by introducing an SUV. This year, BMW introduced the Mini brand in India. We have already driven the Cooper S, and now we review the Countryman S version. If you are looking to procure one of these, please read the review as the mystery unfolds.

The Mini Cooper Countryman S— as it is called— is the first crossover SUV from Mini’s stable. The dimensions are compact and the car retains the designing cues of the Mini. It might not impress you as much as the Cooper S in looks, but it bears a striking resemblance to the Mini family.  The Minis and even the new age Coopers look cute, while the Countryman has more of an aggressive stance, when compared to its smaller siblings.

The Countryman S looks more on steroids, with the step on the hood and large black front grille. A similar story continues on the side profile as we see larger wheel well and also the traditional floating roof design is carried forward on the SUV.

The side metal air scoop wears a prominent-red S badge and even the wheel-on-each-corner means no front or rear overhang. The Countryman S has four-doors and a longer wheelbase than the Clubman or the Cooper.

The rear of the Countryman looks a bit too chunky— especially the bumper bit. Despite being a four-pot engine, it gets twin exhausts for better flow of the exhaust gases.  The Countryman however gets a Cooper S badge and Countryman hasn’t been mentioned anywhere on the outside.

The story on the inside of the Countryman is completely opposite. Though it is sooped up on the outside, the interiors remain similar to that of the other Minis. The quality of plastics is similar like the other Minis with good fit and finish. It doesn’t just look rich, but also the feel of the materials is good. It gets a large tachometer dial above the steering wheel, which can be adjusted along with the wheel. The steering wheel comes with various buttons to control the audio system and also to activate and change the settings on the cruise control.

A big dial on the centre console displays music and also has a fuel gauge. The in-dash music system is Harman Kadon and the music output is fantastic.  The seats on the Countryman S are well-bolstered and they are largely supportive for your thighs and back.  There is immense space in both the rows and even the boot is large enough to gobble luggage for four for a weekend trip. To our dismay, the Countryman misses out on leather seats, electrical adjustments for the seats and the steering, especially when you consider the price of the product.

BMW has plonked in a four-cylinder 1.6-litre petrol engine in the Countryman S. This engine churns out 184bhp of power and whooping torque of 260Nm, thanks to its twin-scroll turbocharger. This is the same engine that also powers the Cooper S. The turbocharger enhances the engine torque, and so a 1.6-litre engine can churn out 260Nm, which is incredible for an engine of its size. Crank the engine and it blurbs to life.

The NVH (noise, vibration and harshness) levels are low, while the grunt from the exhaust is sporty. Overtaking in the city or the highway is just a pedal away. Plant your right foot and the engine surges forward.  The Countryman S in India comes with a six-speed automatic transmission. The Indian-spec doesn’t get the simple shift stick option. The six-speed box also comes with paddle shifts. The shifts on the box are decent and do not feel lethargic.

Apart from the engineering innovations of the Mini, it was loved for its driving dynamics. The Mini always drove like a go-kart. The steering wheel felt direct and the handling characteristics were phenomenal.  BMW has continued with the similar tradition not just on the Cooper but also on the Countryman.

The feel of the compact SUV is very-much like a go-kart, despite its larger dimensions.  Push it around the bend and it will stick to its line. The steering wheel is light at low speeds and it weighs up as the speed increases. The ride quality of the Countryman is a bit soft, but it is still well composed and smooth. Despite the soft suspension, the ride didn’t feel jittery at higher speeds or uneven roads. The Countryman S absorbs most of the road shocks and undulations.

If you wish to buy an iconic vehicle with some practicality, the Countryman S is the one to buy. If you want something more fun to drive, the Cooper S is the ideal choice.