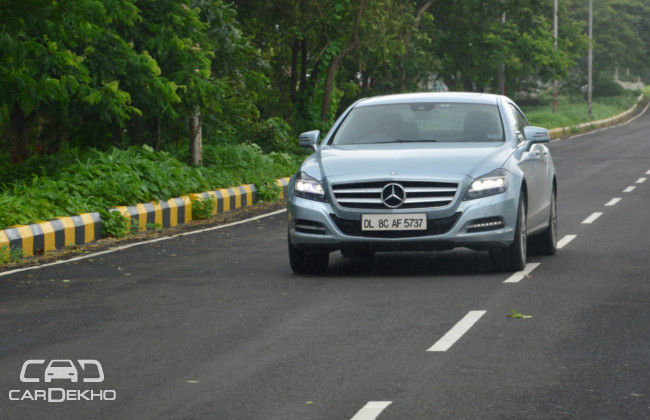 We just spoke about how the fastback saloon segment has been evolving in the luxury car market, and we have the first-mover in this segment, the Mercedes-Benz CLS. To begin with, this isn’t a facelift, this is a mere model year upgrade and not the CLS that we have been seeing with the LED headlamps and stuff. The new Mercedes-Benz CLS 2014 is here and we lay our hands on this new saloon. Let us find good how good or different is the new Mercedes-Benz CLS 350.

The CLS 2014 has some upgrades on the exterior. But there aren’t many. First of all, this isn’t a facelift, so there aren’t many changes. It retains the same headlamp styling and there is no change in the design. What we love about the CLS is its sloping roof that makes it look like a Coupe and the pillar-less door frames. These all contribute to the glam of the CLS. This makes it look a lot more stylish and appealing, and stand out in the crowd.

The changes on the new Mercedes-Benz CLS 2014 are paint shade, 15-spoke 18-inch alloy wheels. Apart from this, the rest of the kit remains the same. There is no change to the day-time running LEDs or the tail lamp. This is the second-generation CLS and it does have presence. But the current one too can turn heads and be the centre of attraction.

The interiors of the 2014 CLS have been upgraded as the company has revised the styling. You won’t realise the difference until the moment you step into the old and the new CLS. There is the same three-spoke steering wheel as we have seen on most of the new generation Mercedes-Benz with a three-dial instrument cluster. The numpad, music controls and the air-con controls form the centre console. The gear lever is mounted on the steering column and the interiors are very much like the E-Class. At least the front row. The COMAND system has been optimised for faster connectivity with your phone. Then there is also the added MapMyIndia for navigation. However, it doesn’t panoramic roof, there is only a single sunroof and it is part electric, which is kind of disappointing.

The CLS has been made for a driver and a chauffeur-driven owner too. Hence, there are a lot of features of the rear passengers. It is a strictly two seater as there is the division, which is the stowage space, be it glass holders, storage for the rear passengers. Extra accessories can be added too. The seats are comfortable at the rear, however the sloping coupe-like roof means tight head room. The boot of the CLS might look small on the outside, but it is humongous on the inside.

To begin with, the same 3.5-litre V6 petrol engine has been retained on the CLS 2014. This engine churns out 302bhp of power and the new 3.0-litre V6 twin-turbo will come on the next model. No tweaking has been done to this engine and it comes mated to the standard 7G-MATIC transmission. To begin with are the very low levels of NVH levels. At idle, you won’t realise the engine is switched on until you see the tachometer with engine spinning at 1000rpm. It feels like an electric motor, thanks to the V6 construction and the insulation of the cabin.

The engine has strong mid-range and being petrol, it pulls strongly as the revs rise higher. The power is linear and there is no trouble in overtaking. Majority of the vehicles on the road are four-cylinder and under 100bhp, so there is no issue in overtaking be it the city or the highway. Then there are different driving modes- the comfort and the sport. The shifts on this box are lethargic and it isn’t as responsive as the dual clutch competition. In the sport mode, the shifts are faster and in manual it is again a tad slower than what we did like. For those who aren’t aware, the 7G-TRONIC comes with two-speed reverse gearbox.

Again, no change in the underpinnings, the mechanicals remain unchanged. The same suspension set-up continues on the CLS. This saloon is based on the E-Class platform and to hence there is no doubt in its ride quality. The CLS-Class glides through the potholes as the suspension absorbs all the jolts and shocks from the road. The only downside to the CLS on Indian roads is its ground clearance. However one can raise the suspension and avoid its underbelly from scraping.

The handling is agile. The length of the CLS doesn’t affect its handling and you never feel like you are driving such a long car. To be honest, it feels a lot like the E-Class while driving, however this handles better, as this has a sportier set-up. The steering wheel is light and comparatively easy to drive.

Mercedes-Benz CLS is a masterpiece design from this Stuttgart-based manufacturer. The fact remains that the CLS is still a complete import, which does hike its price and this does make it an expensive affair, especially when you compare it price vis-à-vis features. If you are really fond of the CLS styling and aren’t bothered about the price tag, then pick this up, else we recommend the E-Class and if you have extra to shell out then the S350 CDI.