Jack the Ripper was a brutal serial killer in the relatively small community in London. The name had originated in a letter, which was written by someone who was claimed to be the murderer. This in reality was a hoax, believed to be made by a journalist back in 1888. Today, we have another British ripper— Jaguar , which is eating into theGerman luxury car territory in India— whilst the German auto makers battle out amongst each other. 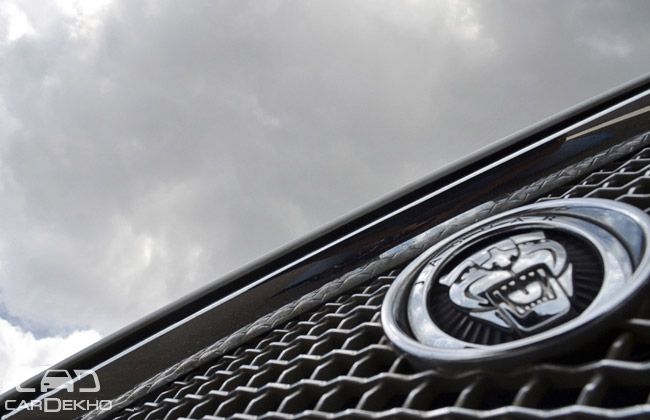 Last year, JLR saw a tremendous growth in its Indian sales figures and now the cat seems to be leaping deeper into the Indian jungle. We review the XF — which is the entry-level Jaguar— and find out if it matches the finesse of its German competition. Read further, to know if the Coventry cat is really the German luxury car ripper?

The rich character of the XF is clearly evident and it does feel to be more expensive than its current price tag. Many aren’t aware of the fact that the XF competes with the E-Class , 5-Series and the A6 .

XF was alwaysa stunning piece of art work, and the recent faceliftmakes it look even sharper. Revamped version gets the new family fascia, making it look similar to its elder brother— the XJ . Even I had mistaken it as the XJ, when I first encountered the facelift XF head-on.

The headlamps have now got sleeker andwith the addition of day-time running LEDs, which further garnishes the facade. This makes the snout look-not-just sharper butalso melds well with the revised design of the front-chrome grille.

Side profile remains similar with the same old chrome DLOand the sloping roof,givingit a coupe-like stance. The redesigned side metal scoops and the new 18-inch Lyra alloys further contribute to the XF’s silhouette glamour. Rear remains untouched with the same thick chrome lip and extended tail lamps—though the lamps are now LED! We loved the newS badge as it somewhat reminds us of the sporty R badge.

XF continues to impress not just on the outside, but even once you step into the car. The titivated version gets multiple changes on the inside. These majorly include black buttons on the centre console, new touchscreen music system and some minor changes on the steering wheel and instrument cluster. Interior quality is still first-rate and the ambience feels very British.

The Jaguar XF can accommodate four large adults at ease while the fifth can fit with a bit of squeeze. Sloping roof means a bit tight headroom for the six-foot rear passengers. Get behind the wheel and you can easily get comfortable with the electric seat and steering adjustment. Even the seat bolstering has been changed to increase the comfort level. The boot can gulp luggage for five with ease.

The new touchscreen music system now has a single CD player instead of the six. This was smart thinking by the company as the usage of music CDs has reduced. What more can be done is that music can be streamed through your mobile phone via Bluetooth, with the flexibility to change tracks via the touchscreen. The XF now also gets the soft-close boot like its German competition.

The revamped version of the XF only gets cosmetic updates while the mechanicals remain untouched. So the XF S retains the 3.0-litre V6 twin-turbo diesel engine that churns out 271bhp of maximum power and 600Nm of peak torque.This is the same oil burner that also powers the Jaguar XJ , Land Rover Discovery 4 and the Range Rover Sport . The twin turbochargers are of different sizes and this helps to reduce the turbo lag. Hence, the power delivery is linear and there is no sudden increase in the torque like most of the diesels.

Just like any luxury car, the NVH (noise, vibration and harshness) levels are low and no sound intrudes into the passenger cabin.Plant your right foot and V6 monster surges ahead, pushing you back into the seat. This V6 really does have plenty of power and all you need to do when you wish to overtake, is simply put your foot down and you will pass by slower traffic at the bat of an eyelid.

The gear knob rises above, once you crank the engine. This oil burner drives the rear wheels through the self-shifting six-speed ZF transmission.The upshifts on this box are quick, and even better in Sport mode. It is the downshifts where there is a bit of latency. If you wish to go racing on a track or want to enjoy driving around the hills, you have paddle shifters to play with.

No mechanical upgrades on the facelift version means the same underpinnings are retained on the XF S. Front and rear both get double wishbones with anti-roll bar, with the inclusion of coil springs at the rear. The ride suppleness on the XF S is excellent as most of the jolts and bounces are absorbed by the suspension, without affecting the passengers.

The well-balanced chassis of the XF S makes the handling fairly agile.The handling in the comfort mode is good, but once you budge to Dynamic mode, the XF S flexes its muscles. Flick it around a corner and will be stick to its line.Further the light electric steering makes driving in city a breeze, but at higher speeds it does feel a tad artificial. Albeit once you get a hang of it, it is easier to drive quicker around tight bends.

The facelift version of the XF doesn’t just make it look sharper, but also more aggressive than the earlier version. The changes on the inside are also refreshing. The XF S is a strong performer with exclusive styling and touches. If you procure one of these, then you aren’t just buying a luxury sedan that looks and feels spectacular, but also the status this marque also carries. Not many brands in the world can carry such an image and rich history.  The pricing is a tad steeper than its competition, as the XF is a CBU (complete body unit), whereas its competition are CKD with some local content in them.