Based on the Elite i20, which is anyway an excellent car, does the Active tag chisel out the i20’s shortcomings or the added bulk and ground clearance comes with its own baggage? It's time to find out. 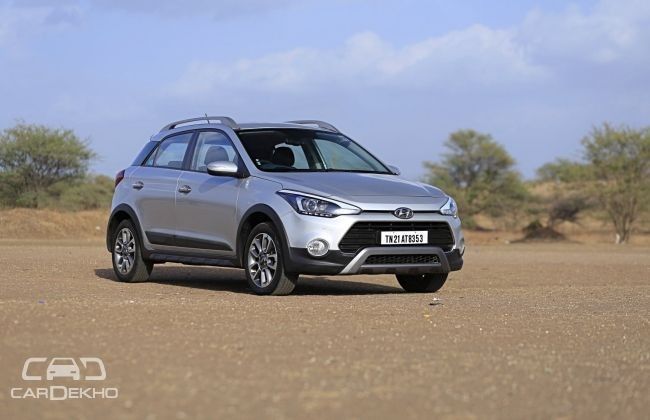 India loves muscles. From our actors to our cars, we want almost everything to look muscular. But when its comes to hatchbacks, there is only so much butch you can add and still make the design palatable. Hence, cross hatches were invented. Based on elegant looking hatchbacks, they exude a sense of sturdiness with their design while occupying the same parking space. Also, they let you explore the countryside while being perfectly practical in the city as well. Although Hyundai was a little late to the party, they came in well prepared with the i20 Active. Let's see if the time they took was worth the wait.

It's a hatchback. No matter what angle you choose to look at the i20 Active from, it shouts out Elite i20. To point out some obvious differences, the Active gets new bumpers, wheels, body cladding and roof rails to give it the cross/off-road look.

On the outside, the Active wears certain new elements and magnifies others to make it look more butch. The bumper now houses a wider grille flanked by two large circular foglamps. What stands out most prominently in the Active's front fascia is the new silver faux skid plate which imparts a tough look to the hatchback. The headlamps and the DRLs are the same as those on the Elite but the addition of cornering lamps is a neat and useful touch.

Move to the side and the Active's 20mm raised ground clearance (190mm) becomes evident. The wheel arches sit higher off the wheels which is further accentuated by the black cladding which runs along the side of the car. Even though the rim size is the same, the chain-link alloy wheels make the car look tougher. The roof-rails make the Active look taller and endow it with a bigger car look. The boot-mounted spoiler here is also bigger than the Elite which further adds muscle to the car. All of these elements combined to make the car look muscular.

Move to the back and the changes are only limited to the lower half. The black cladding takes up half of the bumper and the reflectors are big and round; in sync with the fog lamp design. The asymmetric design for the reversing light continues here as well with the right side reflector housing a round reverse light.

Overall, though the added mass makes the Active i20 look muscular but it falls short of imparting the sense of a proper crossover. The design adds enough mass to please people looking for a tough hatchback but could fail to attract people looking for a genuine cross-hatch.

Step inside the i20 Active and you are greeted by a dual tone cabin. Our 'Sleek Silver' test car came with the blue-black interiors but all other colours come with black interiors with orange accents around the AC vents, seats and the gear shifter. Getting in the desired driving position is fairly simple with the height adjustable seat and tilt/telescopic movable steering. Spend some time inside the car and you begin to admire the quality and fit/finish of the cabin. The leather wrapped steering wheels offer a good grip and the fabric seats are wide with adequate cushioning to hold you in.

The steering wheel is a three-spoke unit with controls for call and audio on the left side and buttons for the MID screen on the right side. The instrument cluster is a clutter-free dual-pod unit. The MID screen in the centre of the two dials reads out relevant drive information and can also double up as a digital speed display which looks pretty cool.

Moving on to the centre console, our car was a bit old and hence we did not get the touchscreen infotainment system. But, the current equipment list includes a touchscreen infotainment which supports MirrorLink, Android Auto and Apple CarPlay with the top-end variant. Instead, our car had a 2-Din audio system with Bluetooth smartphone pairing which is now available in the lower variants. Pairing the phone is simple and the sound quality from the 4 speaker+4 tweeters setup is impressive. All the buttons are well built and offer a good tactile feel.

The chunky gear knob gives a good grip. The gears slide nicely into the slots leaving little room for a miss-shift. Storage spaces are in abundance with door pockets, space in front of the gear lever, sunglass holder, space under the front armrest and cup holders. All these spaces ensure keeping nick knacks in the car never becomes an issue.

The rear seat of the Active i20 is wide and well cushioned with adequate under-thigh support. Being seated here on long journeys won't be an issue. The bench is flat in the middle allowing the third passenger to be comfortable as well - as long as he/she has an average built. The legroom for the passengers is also ample and though nowhere near the palatial WR-V (990mm max knee room), at 820mm (max) you can expect to easily fit in a full size adult with ease. The adjustable rear headrests and the rear AC vents ensure that passengers will remain comfortable.

This is the same 1.4-litre diesel unit from the Elite i20. The engine is a pleasure to drive as it packs enough grunt to quickly add momentum and is smooth at high speeds as well. The 220Nm of max torque is available from as low as 1,500rpm and there is a strong surge that can be felt when you let go of the clutch in first. Speaking of the clutch, it is a bit on the heavier side and did cause fatigue in long hours of city driving.

When you decide to get going, the turbo kicks in gradually and the power delivery is strong and linear. The engine revs strongly till about 4,300rpm and shifting quickly is not an issue. It makes 90PS of max power at 4,000rpm and even on the highway, the Active never felt underpowered or struggled to gain speeds. Even at highway speeds, the cabin is able to keep the road, wind and engine noise well in check and feels very well insulated.

If you have driven the Elite i20 before, you’ll immediately notice that the i20 Active has a stiffer suspension setup. As the ground clearance is raised, the i20 Active is given stiffer springs to control the body movement. This works fantastically as Hyundai has got this setup just right. The car remains well under control at high speed or while taking a sharp turn and there’s negligible body roll. The car also does not lose composure over bumps, though they can be felt in the cabin. After having driven the Active, I feel even the Elite i20 should be given a similar setup as it makes the drive so much more engaging. Overall, the suspension setup seems to be slightly more focused towards keeping the car stable rather than on outright comfort, which according to me is the ideal setup for an urban car in the Indian scenario.

The steering wheel is light for city use but does leave you wanting for feel as the speed goes up. In the city, the lightness allows for quick and easy U-turns without causing fatigue. Even at high speeds, it never feels unsafe but the feedback, though enough, but it could have been better. Brakes of the i20 Active also shy of progressive feedback but nonetheless, are quick to stop the car and inspire confidence even under emergency braking. The ABS lets you press the pedal hard without having to worry about spinning out of control.

In terms of occupant protection, the i20 Active is very well equipped. The top-end variant gets six airbags, ABS, reverse parking sensors and camera. The centre infotainment screen on the top end variant doubles up as the display of the reversing camera while the mid S variant, the rear view mirror does the same. The overall build of the car also feels strong and confidence inspiring.

The Hyundai Elite i20 was already a well put together package. It had all the necessary features, a punchy engine and comfortable interiors. What the Active has done to the package is further improve it. The firmer suspension setup, raised ground clearance and the dual tone interiors add to the liveliness of the car and make it a joy to drive. The only thing holding back the i20 Active crossover is the fact that it fails to convincingly distinguish itself from the Elite i20 hatchback it’s based on. Hence, the Hyundai i20 Active, though a brilliant overall car, falls short in the purpose it was built for - to inspire a bigger car feel. So, if you are looking for a muscular hatchback, the i20 Active is definitely a front-row contender. But, if you are looking for a crossover/compact SUV, the i20 Active just falls short.