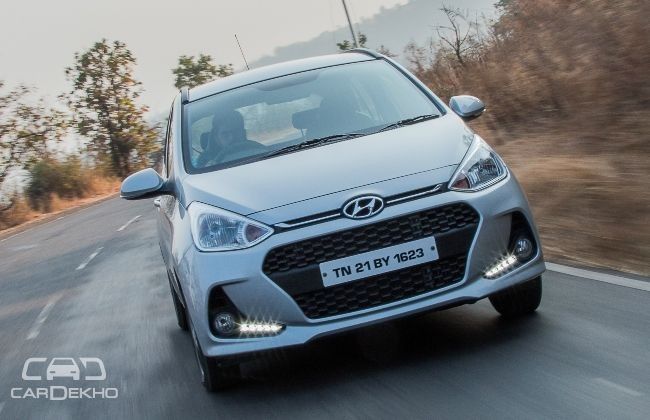 The Hyundai Grand i10 was the most attractive package in its segment when it was launched back in September 2013. It was priced aggressively, looked smart on the inside, had class-leading interior quality, segment-first features and was backed by a reliable after-sales network. While the Grand i10 was offered with both petrol and diesel powertrains, the diesel motor was not the most powerful in the segment - the only downside in an otherwise brilliant package. The Grand i10 facelift has been launched in India just over three years after the original model - it appears to be better in every respect and takes on a vastly improved competition. But is the refreshed Grand i10 better than before and how does it stack up against rivals such as Maruti Suzuki Ignis?

The Hyundai Grand i10 was never exciting to look at, though it was certainly smart. With the facelift, the Grand i10 adheres to the company's new design philosophy. At the front, the biggest changes include a new ‘cascading grille’ design, a reworked upper grille and a redesigned bumper with new fog-lamp surrounds and the all-new LED DRLs.

At the side, the changes are limited to the redesigned 14-inch alloy wheels. At the rear, there’s a new bumper which includes a large black insert with circular reflectors. The new rear bumper design is expected to divide opinions - the pre-facelift model looked smart and the redesign feels unnecessary.

Step inside and the cabin has an airy and premium feel. Be it the seat covers, plastic trim on the dashboard or doors, the buttons and even the touchscreen operation - everything has a feel-good factor. Hyundai has not altered the design inside; you still get the dual-tone theme, four large circular AC vents on the dashboard, a deep-set instrument cluster, a three-spoke steering wheel with large multi-function buttons and the high-mounted gear-shift lever.

The centre console still sticks out a bit like before but now gets two new additions - a large 7.0-inch touchscreen display and a fully-automatic climate control console. While the screen is well integrated, the buttons around it seem to have been designed in a hurry and do not have the same feel as the buttons of the previous non-touch infotainment system. The climate control console is a welcome addition and brings the car up to date with its rivals.

The front seats are comfortable; the cushioning is neither hard nor soft. In fact, the seats are slightly contoured to give passengers a snug feeling. The driver seat is adjustable for height too. The only gripe is the integrated headrests - these look out of place in a cabin that is otherwise premium looking/feeling and also limit adjustability for shorter or taller passengers.
Rear seat passengers will find that the Grand i10 is best used as a two seater for a comfortable trip.

Though the cabin is wide enough to accommodate three passengers, a slightly raised centre tunnel and the rear AC vent console curb room for the centre passenger. The unavailability of a headrest (the other two passengers get adjustable ones) and a lap-belt (three-point units for the other two) make it a less safer position to be in too. The legroom, knee-room are adequate enough for passengers even with 6-footers occupying the front seats - though it is not class-leading. Tall passengers will find no reason to complain about the headroom.

The rear bench can be folded down, but cannot be split-folded - this does reduce convenience slightly. The luggage compartment has a 256-litre capacity which is unchanged from before - it is 5 litres more than the Ignis to remain the largest in the segment.

The Grand i10 now features simple LED DRLs, which are placed low down on the front bumper alongside the fog lamps. While these are bright and do their job well, they look like after-market units. An interesting thing about the DRLs is that they switch off if you engage the parking brake even when the car is switched on; this can be beneficial to other road users as they can be sure that you are not about to move even though your engine is on.

Inside, the biggest change in terms of equipment is the new 7.0-inch touchscreen infotainment screen. This can be connected to your smartphone via MirrorLink and has Android Auto and Apple CarPlay compatibility for added convenience. The Grand i10 is also offered with a rear parking camera with guided-display on the new infotainment screen.

The Hyundai Grand i10 is one of the first cars I have tested which has seamless smartphone connectivity. It also surprised me with its responsive touchscreen. The infotainment system also responds well to the steering-mounted controls. The new Grand i10 also gets voice command for the infotainment system to take advantage of the smartphone connectivity.

The Hyundai Grand i10 is offered with two engine options - a 1.2-litre, 4-cylinder, naturally aspirated petrol motor paired to either a 5-speed manual transmission and 4-speed automatic transmission. The car we have tested is the new 1.2-litre, 3-cylinder, turbocharged diesel motor paired to a 5-speed manual transmission. The only time you feel the vibes from the engine is when you switch it off – the cabin shakes vigorously.

The diesel motor is basically a revised version of the 1.1-litre motor which powered the older car. The increase in displacement has in turn helped increase the maximum power output from 71PS to 75PS and peak torque output from 160Nm to 190Nm - this makes the car very easy to drive, especially in town. The new 1.2-litre 'U2 CRDi' motor now develops 190Nm of maximum torque -  from a very low 1,750rpm - the Grand i10 feels peppy at all times. Out on the highway though, the Grand i10 feels sedate in comparison - the power trails off after 4,000rpm and progress is slower past 110-120kmph. The Grand i10 diesel has a 0-100kmph time of 17.32 seconds, which is decent.

The 5-speed manual transmission is a treat to use, it slots in very well even when used in urgency. The pull-up type reverse gear-lock works smoothly and feels nice to hold. The Grand i10's new diesel motor is also efficient. It returned 19.1kmpl in the city and 22.19kmpl in the highway in our instrumented tests. Combined, the Gran i10 has an efficiency of 20.71kmpl, which is close to the ARAI-certified figure of 22.4kmpl.

The Hyundai Grand i10 has a suspension tuned for city use; it is neither too soft nor too hard - it feels just right. The suspension always works noiselessly, letting in only the most harshest of bumps inside. The combination of suppleness and firmness means the ride is never uncomfortable. This combined with the low engine noise and vibrations makes the Grand i10's cabin a good place to be in. The steering is light to use and combined with the tight turning radius makes the Grand i10 a usable city car. Out on the highway, the light steering does reduce your confidence - but the suspension and brakes (backed by ABS) work fine.

The Hyundai Grand i10 features a driver-side airbag as standard across the range. On the top-of-the-line Asta variant which we have tested, safety features include dual front airbags, ABS, impact sensing door-unlock, rear defogger and rear parking sensors and camera.

The Hyundai Grand i10, for the price, does not offer as many safety systems as the Ford Figo. The Figo, with 6 airbags, ABS and EBD trumps the Grand i10 in terms of safety.

The base Era variant is available with front power windows, manual air-conditioning, a driver-side airbag and gear-shift indicator. The Magna variant gets the above features and front fog lamps, keyless entry, full wheel covers and rear AC vents. The Sportz variant gets, over the equipment mentioned above, rear parking sensors, rear defogger, a cooled glovebox and a 5.0-inch touchscreen infotainment system. The additional equipment on the Sportz(O) variant include a 7.0-inch infotainment with Apple CarPlay and Android Auto, LED DRLs and 14-inch alloy wheels. The top-of-the-line Asta variant is offered with ABS, push-button start/stop, automatic climate control and a rear spoiler.

It makes most sense to go for the Sportz(O) variant and up; the lower variants seem too spartan in comparison. It is especially surprising that the Era and Magna variants are not offered with a multimedia system at all from the factory. The ABS is limited to the Asta variant, making it the most sensible buy.

The facelift helps the Hyundai Grand i10 remain a lucrative car to buy in its segment. While the exterior design changes are limited, there are significant improvements in terms of equipment on offer and the new 1.2-litre diesel motor. The problem is that most of these improvements are limited to the top-end variants. If looked at in isolation, the Grand i10 is still a comfortable, spacious, feature-laden family hatchback for the city. But, it fails to stand out amongst the competition, especially when compared to the Maruti Suzuki Ignis.

Things We Don’t Like In The Grand i10:
- Base variants are equipped with only a driver-side airbag and no ABS; the Maruti Ignis offers dual airbags and ABS as standard
- ABS is only offered on the top-of-the-line Asta variant
- Audio system is not standard in base variants
- Integrated headrests for the front seats reduce usability

Stand Out Features:
- 7.0-inch touchscreen infotainment system with Android Auto and Apple CarPlay
- Auto folding ORVMs during lock/unlock is useful and adds a premium touch
- New 1.2-litre diesel motor makes the Grand i10 better suited for the city
- Superb NVH control and overall quality of the interior makes the Grand i10 feel a segment above