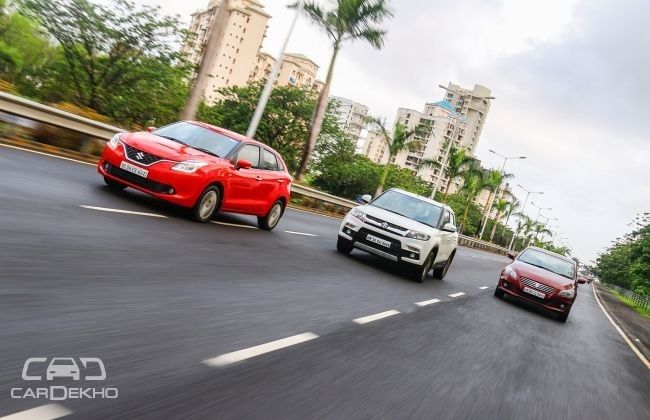 One of the most commonly asked questions that we as automotive journalists face is, “I have about Rs 10-12 lakh to spend on a new car. What should I buy?” Now, usually, this is met with our standard response, which goes something like, “Do you want a hatchback, sedan or SUV?” Although some people know exactly what type of body style they want, most people do not. What they do know is that they want to buy a Maruti Suzuki. And why wouldn’t they? If peace of mind ownership and a fuss-free after sales service is what you need that is the logical choice for most Indian buyers. And that is why we decided to bring together the newest cars from the Maruti Suzuki stable, the Ciaz, the Baleno and the Vitara Brezza together for the first time to see which one of these would be the best car to buy.

Now, you can’t really compare these three cars like we traditionally do so what we have decided to do instead is make a special set of parameters.

Which looks the best?

Looks are subjective. While some of our dear readers might prefer the Baleno for its European design, some might prefer the Brezza for its chunky looks and some might prefer the Ciaz for being classy and understated yet very cool. Which one do I prefer? Well, when it came time to choose between the three on the first day, I lunged at the Vitara Brezza keys since I have always been a bit of an SUV fan. But spending a good three days with the three cars, I did start to incline towards the Baleno (especially since it wore that lovely red colour). The Ciaz, on the other hand, although really sleek does look cool in the correct colour but, personally, does little to excite me. That said, all cars have their positives and negatives so let us list them out for you.

Let’s start with the Ciaz. As I just mentioned, it does look cool when in the right colour (grey or black) and it is the largest car of the lot. I love the wheels that the Ciaz gets and I personally think that they are the best wheels on a Maruti Suzuki car since the 2002 Zen Carbon. That said, I have never been a fan of all the chrome and the overall design too reminds me of other cars in the segment, which is a bit of a turn off.

The Baleno also has the same chrome problem, especially on the top of the line variant we have here. The chrome strip on the boot and the chrome door handles look really out of place on such a well designed car and are just way too bling-y for my taste. But I love the euro design that the car gets and specially like the headlamp cluster with the great daytime running light LEDs. Although the wheels could have been better, you at least do get a set of 16s on the top of the line variant. In fact, everything here gets a set of 16-inch wheels. And that brings us to the Brezza.

Now, the Brezza is the safest approach to design I have seen Maruti do in a while and yet it does seem to stand out really well against its peers. The white paint on this one here might look drab and slightly boring, but get a bright blue or a red and you are bound to turn heads. I also personally think that although well styled, the Brezza does tend to look a little simple when put next to the likes of the Baleno. And if I really had to nitpick, I would have made the daytime running lights a little brighter. That said, if I had to choose one I would still choose the Brezza as, all said and done, the road presence it brings to the table is unmatched.

What about engines and fuel economy?

The Baleno and the Ciaz are available both with petrol and diesel engines. The Vitara Brezza on the other hand is only available with a diesel engine. Therefore, all these three here are diesel powered. And of course, all three get the exact same 1.3-litre, 4-cylinder, turbocharged DDiS engine. The Brezza and the Ciaz get the more powerful 90PS/200Nm tune whereas the Baleno gets the slightly less 75PS/190Nm state of tune. That said, the Baleno at 980kgs weighs considerably less than the Brezza(1195kg) and the Ciaz(1130kg). Not only will the Baleno get off the line a lot faster, it will keep pulling away from the Brezza and the Ciaz.

And it is more fun to drive too. The likes of the Swift have always been a ton of fun to drive and the Baleno takes it to the next level. If you work the gears well, there is instant power in every section of the rev-range and you can quickly get to triple digit speeds. The next best in terms of driving dynamics has to be the Brezza. Combine the engine with the fact that you feel a little more comfortable driving it fast (as you have a more commanding view of the road), the Brezza might not be as quick as the Baleno but it is just about as much fun.

Comparatively, the Ciaz is the most laidback of the lot. It is not that it isn’t as quick as the Brezza or isn’t fun to drive, it just prefers to waft about and do its job of transporting people from point A to B quietly rather than be shouty about it. This is also why the Ciaz is the most fuel efficient of the lot, at a really impressive 28.09kmpl according to ARAI figures. The lighter Baleno of course is the second most fuel efficient at 27.39kmpl while the Brezza is just a nudge behind at 24.3kmpl. Now we know that you will have to drive really tactfully to get anywhere remotely close to these figures, but getting close to 20kmpl on the highway is easy for all the three cars we have here today.

Which is the most comfortable?

The answer to this question is actually quite simple. If all you want from your Rs 10-12 lakh Maruti is comfort, buy a Ciaz. It is by far the most comfortable car in the lot here as it has the softest suspension setup of the three. That said, it does not bottom out like other softly sprung cars in its segment either. The Ciaz is also the most spacious at the front and at the rear. And it gets a beige interior package with leather seats. As much as we personally like cars with black interiors, beige does make the cabin look a lot brighter and a lot more inviting to the average Indian customer. So now that the winner of this category is out of the way, let us talk about the other two.

Which car has the best features?

The Brezza, Ciaz and the Baleno are very very closely matched when it comes to features and gadgets. Let’s start with the exterior. All three cars get projector headlamps but only the Brezza and the Baleno get a set of LED daytime running lights. The Ciaz and the Brezza get a standard set of tail lamps while the Baleno gets LED tail lamps. All three cars come with a set of 16-inch alloy wheels on the top of the line variant (we prefer the ones on the Ciaz the most).

When it comes to the interior all three cars get steering-mounted audio and phone controls, a starter button with keyless entry, and an auto-dimming rear view mirror. The Ciaz does get a leather interior option on the top of the line variant that the Baleno and the Brezza lack. The Brezza, Baleno and Ciaz all get the same touchscreen infotainment package which supports navigation, Bluetooth telephony (and audio streaming) and of course, a USB plug-in.

All three cars get Apple CarPlay and Android Auto. The Brezza also gets additional features like automatic wipers and cruise control. So, the Brezza is the most loaded in terms of tech and gadgets and wins this segment but the Baleno is a very close second place. The Baleno’s dashboard is also far better designed than the Brezza and the Ciaz and would definitely appeal a lot more to younger audiences.

Which one would give me the best driving pleasure?

Ok, now we admit that this question is not one that we get asked often, but for the sake of being thorough, we have decided to add this in as well. Driving pleasure is not just how good the car handles or how well the steering feel is. It is a mixture of the two above, along with the likes of engine response, transmission and clutch effort, and whether or not a car tends to make you feel tired after a long drive.

If we take all these into consideration the Baleno truly thrashes the Ciaz and is a tad better than the Brezza. It handles the best (by a long margin), has the best response and you genuinely do not feel tired after even five or six hours of driving as the car always feels really quick on its feet. The Ciaz, on the other hand, does show its size and even though it is comfortable, it does not impart the same driving pleasure as the Baleno or Brezza. The Brezza is the mid-fielder of the lot here and offers a good blend of everything but when driven back to back with the Baleno, the difference is very obvious.

So which one should I buy?

This is by far the most difficult comparison test we have done as there are three different cars that do a whole bunch of things really really well. If you are a middle aged or older person who just wants a comfortable chauffeur-driven car, just go and buy the Ciaz – we guarantee that it will not disappoint you. But what if you are one of the hundreds of people who ask us what to buy and actually want to drive the car yourself? The Ciaz is the most expensive at Rs 10.54 lakh and comes in at third place in our comparison. That leaves the Vitara Brezza and the Baleno. And this is where it gets difficult.

I like SUVs and the top of the line Brezza comes in at a relatively affordable Rs 9.78 lakh, making it great value for money. If you prefer a slightly larger looking vehicle and you do have to travel over consistently bad roads (or you drive in a city where the roads occasionally seem to disappear), you should get the Brezza. As a bonus, you also get the road presence that SUVs offer, which on Indian roads could mean a lot.

But, the overall winner of this comparison review has to be the Baleno, which is priced the cheapest of the lot at Rs 7.78 lakh. The more time I spend with the Baleno, the more I prefer it over the Brezza, and that is high praise. Yes, it does have a slightly smaller boot than the Brezza, but it does everything else a lot better than either of the two cars. In fact, it is the ideal car for the young-at-heart professional or family man/woman who prefers a hatchback but still wants something a little more premium. In fact, we would even go to the extent of saying that the Baleno is the best car that Maruti Suzuki makes today.