Published On Sep 28, 2013 By CarDekho for Maruti Wagon R Stingray

What more WagonR Stingray has to offer to its buyers, when highly successful WagonR is already there? So to figure out these 'same-same but different' cousins,I decided to drive the Stingray, which is the latest offering from India's leading carmaker Maruti Suzuki India. Priced a little over Rs. 50,000 higher than the regular WagonR, Stingray is certainly a more upmarket product than the other one. While platform, engine and other technicalities make it a dissimilar product, more features, better interior feel and cosmetic updates are what separate this from the regular WagonR. 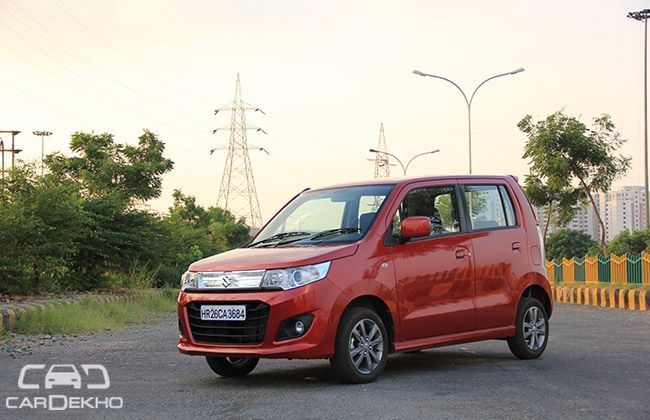 WagonR Stingray is originally the WagonR at heart, with subtle design changes, making it look a more refreshed product. Front fascia is the most interesting part of the car, which not just sets it apart from the regular WagonR, it gives it that much needed youth appeal.

This is possibly the first hatchback to have adorned projector headlamps in India, which however has been offered with the top-end variant. Then its clamshell bonnet and glass covering on the newly designed grille, distinct front bumper with new fog lamp fitment and large radiator grille add more to its youth appeal.

Coming to the side profile, which however looks quite similar to that of the regular WagonR, gets some very important changes. The gun metal alloy wheels fitted on 155/65/14 Goodyear tyres now helps the WagonR look more balanced and no-longer under-tyred.

Moreover, you can see the blackened out B-pillar and roof rails are no more there with the WagonR stingray. One thing that has helped the side profile (metal area) look bigger is the absence of rubber made side strip, offered on WagonR.

The rear profile of the car is almost similar to the regular WagonR, just the spoiler has been mounted on the roof, tail lights now has more clear lenses and rear fog lamps are now placed differently, making it look much nicer. Cosmetic lights placed on the lower bumper and roof border get no place here, which I believe is a right move in order to keep its appearance no non-sense.

There are enough changes given inside the cabin, to make it look more exclusive and up-market. It gets all-black interiors, an audio system with USB and AUX-in support, leather wrapped steering wheel, audio control on steering and a blue-back lit instrument cluster. The dashboard however is similar to that of the regular WagonR. The instrument cluster has the Stingray inscribed on it. Then the vehicle has blue themed instrument panel with multiple information display consisting of two trip meters and real time mileage figure. Unlike the regular WagonR, the Stingray gets the piano black finish on the doors and dashboard in spite of silver inserts.

And if you are one of those looking for an affordable vehicle with tilt adjustable steering and electrically adjustable ORVMs, WagonR is no doubt a worth considering. Driver and front passenger seats are quite spacious with enough knee room, thigh support and head room. However, long distance drive can be a little painful, as the back support of the front seats is not well cushioned, and even after you have installed the good leather, it doesn't give you that comfortable feel.

When I sat on the rear seat of the car, it felt almost similar to that of the WagonR, there is certainly no improvement in terms of comfort and convenience. Boot space of the car too is unchanged, it has the same 180-litre capacity, which if not much, isn't considerably less as well.

Since the Stingray retains the same 1.0-litre K-Series engine and five-speed manual transmission, there is no difference in the driving dynamics of the car. In fact, the road noise which was a problem with the regular WagonR, too has not been given any heed. I was expecting a better insulation since it's a petrol mill, but the car disappoints there, it's all the same as the WagonR.

This 1-litre, 3-cylinder engine churns out the maximum power output of 67bhp, which is pretty decent for a car made for city drives. The car lacks the punch up to 3rd gear; although, it reaches around 75-80kmph in third gear, it becomes too noisy. As soon as you shift the gear to fourth, it shows its power and in fact in fifth gear, it touched the 120kmph with almost no hurdle, but the car doesn't give you the confidence to keep driving it on high RPMs. Too much body roll on sharp curves has been an other factor, which failed to impress me.

What goes in favour of this new Maruti Suzuki car, is the fuel economy. The mileage produced by our car within city was an impressive 17kmpl, enough for a country obsessed with 'Kitna Deti hai?'.

As they say,'every coin has two counter parts', Maruti Suzuki WagonR Stingray too has its goods and bads. While the refreshed design, more features and better interior feel (obviously when compared to the WagonR) are the factors go in favour of the Stingray; unchanged power unit, driving dynamics and the same boxy design failed to impress.