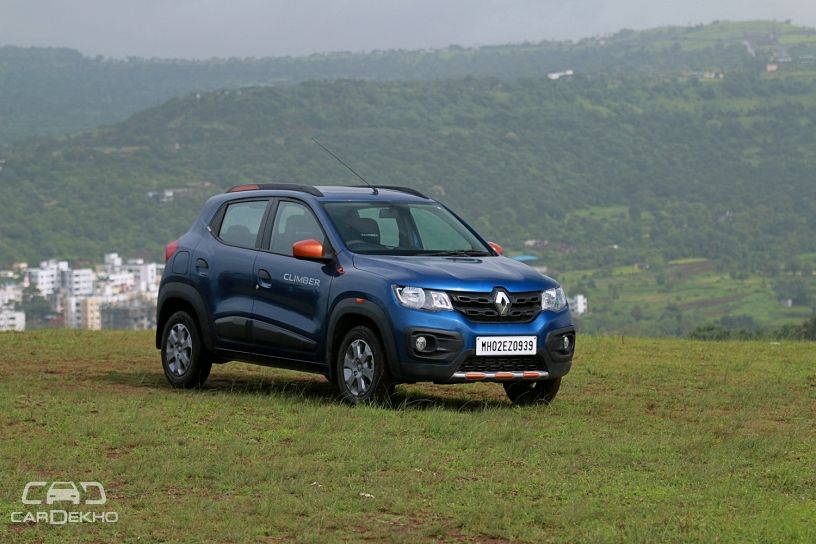 The Renault Kwid has always been the youthful choice in the entry-level hatchback segment. Its SUV-inspired looks, long feature list and the low running cost have kept it the ideal choice of youngsters. And for 2018, Renault has added even more features to the package while maintaining the same price tag, further increasing its value-for-money quotient. Let's have a look at what’s new in the 2018 Kwid Climber AMT.

When it comes to the looks, the Kwid was the first small car in a long time to try something quirky in the segment. For 2018, Renault has given the regular variants of the Kwid minor cosmetic changes such as new chrome elements on the grille, new side graphics and black wheel caps. However, the Kwid Climber remains untouched.

A bold grille, tall bonnet and big body cladding help it look like a mini-SUV. Furthermore, the Climber also gets roof rails, bigger fog lamps and side cladding and faux skid plates with orange accents to butch it up. Apart from that, it also gets wheel caps that mimic alloy wheels.

The 'Climber' badging can be seen on the front doors, rear windscreen and also inside the car. Overall, the Kwid Climber looks flashier than the regular models and hence has a better road presence too.

Inside the Climber, things remain familiar. There is a tasteful use of orange contrast on the door pads, centre console and on the seat upholstery. Other than that, you get ‘Climber’ badging on the steering wheel and seats, which do liven up the interiors.

And then comes the first-in-class touchscreen infotainment system with navigation, Bluetooth, USB and AUX inputs. If these features weren’t enough, Renault has again raised the bar with the 2018 model by equipping it with a reversing camera, a boon for first-time drivers who find it hard to get in and out of tight parking spaces.

And then there is the fully digital instrument cluster which has a clean readout for speed. However, I wish it had a bigger font for the trip displays. Also, the orange background of the cluster further compliments the orange contrast of the Climber.

The Kwid Climber continues to feature the first-in-class AMT dial. It replaces the traditional gear lever with a knob that can be turned to ‘D’ or ‘R’ for drive or reverse, respectively.

Quality inside the cabin has never been the Kwid's stronghold. The plastics on the dashboard, especially on the centre AC vents and the buttons feel flimsy. The door pads use average quality plastic and the cabin is not able to pull off a premium feel. Even the AMT dial feels a bit tacky and a metallic one would have gone a long way in making it feel more rigid.

That said, there are plenty of storage options inside the cabin. Since there is no gear lever, the entire lower console acts as a storage bucket and the area in front has two cup holders, a 12V socket and more space for knick-knacks. There are two glove boxes as well. Even the front door pockets hold 1-litre water bottles with space for smaller items like a cleaning cloth and newspapers.

Speaking of space, the Kwid's rear seats feature a flat bench which can accommodate two adults or three kids with ease. There is decent legroom and headroom as well, provided you tuck under six feet. The 2018 Kwid Climber now gets a rear seat armrest too. This feature, which even cars from a segment above lack, should help longer journeys a lot more comfortable for rear seat passengers.

Most importantly, the 2018 Kwid finally gets retractable seat belts for the rear passengers, which was a glaring omission in the earlier models. Apart from that, there’s also a new 12V charging socket at the rear as well.

The Kwid can not only fit four passengers with ease but their luggage as well. It packs a best-in-class boot space of 300 litres, which is much more than even hatchbacks from a segment above. It can easily swallow a couple of suitcases and travel bags, making it ideal for a weekend road trip.

In a nutshell, the Kwid Climber feels more youthful on the inside when compared to the standard model. It has loads of practical storage options, features and space. If you can overlook the quality of the parts used, it is a nice place to be in.

The Kwid Climber still packs a 1.0-litre petrol motor under the bonnet. It produces 68PS of power at 5500rpm and 91Nm peak torque at 4250rpm. The car we tested came with a 5-speed AMT. You can also buy one with a 5-speed manual as well.

With the 2018 update, Renault has finally introduced the creep function to the AMT. This lets the car move forward gently when in drive mode and you let go of the brake, making the drive a lot smoother in bumper-to-bumper traffic as the driver doesn't have to use the throttle pedal to get going anymore.

However, this function is a little tricky to operate on inclines. As the engine is not too powerful, the Climber simply refuses to crawl on inclines and starts to roll back, forcing you to make a handbrake start. Also, if you hit an incline while in creep mode, the car shifts back to neutral to prevent the engine from stalling.

Inside the city, the 1.0-litre engine doesn't let the Kwid feel out of breath. Even during overtakes, the engine's strong midrange helps you go past traffic quickly. However, the engine starts to run out of stream higher up in the rev range and will not be an enthusiast's first choice. In our test, the Kwid Climber AMT managed to return a mileage of 17.09kmpl in the city and 21.43kmpl on the highway.

Speaking of highways, the Kwid maintains triple digit speeds with ease. However, the slow nature of the AMT forces you to plan overtaking manoeuvres in advance. Although it doesn’t cause the annoying head-nods that are characteristic of AMTs at slow speeds in the city, the Climber’s gearbox tends to lose pace while making an overtaking manoeuvre.

The Kwid Climber AMT takes 17.30seconds to sprint from nought to 100kmph and 9.45seconds to go from 20-80kmph. Sadly, the Kwid’s brakes continue to lack bite and there’s no ABS even as an option. The car takes 59.67metres to come to a stop from 100kmph, which isn't reassuring.

The Kwid'd ride quality has been tuned for city use. So although larger potholes and sharp bumps can be felt in the cabin, it takes on smaller bumps and speed breakers with utmost ease. The suspension is quick to settle after an undulation and doesn't feel bouncy. This trait further helps it on the highway, but only up to a certain speed.

You see, because of the Kwid's skinny 155/80 R13 tyres, it can feel a little unstable while going over broken roads. At high speeds, the car's light kerb weight and slim tyres lead you to make constant steering corrections. There is also a bit of body roll while taking corners at speed, but it's not something which would bother you in the daily commute.

After the NCAP crash tests, the Kwid has developed a bad reputation for safety. And while Renault has not taken any strict measure to counter that image, it has introduced rear ELR (Emergency Locking Retractor) seatbelts, which is just a fancy term for your average retractable seatbelts. Also, the RXT and Climber variants now get a driver’s airbag as standard. However, they are still missing from the other three variants. The Alto K10, on the other hand, has an optional driver-side airbag on all variants. That said, crucial safety features like ABS are missing from both cars.

The Renault Kwid has been one of the most youthful offerings in the segment. It is loaded with features from two segments up, looks quirky, has a spacious cabin and is fuel efficient too. And with the 2018 update, Renault has added more practical features like a reversing camera, AMT with creep function and retractable rear seatbelts to make it as near an ideal small city car your money can buy. And to further improve its value-for-money proposition, the prices have remained exactly the same as before! So, if you’ve always eyed the Renault Kwid, now would be the time to pick one as the deal just got a lot sweeter.