Hyundai Grand i10 gets updated after three years. Do the more powerful diesel engine and added features make the deal sweeter? Let's find out 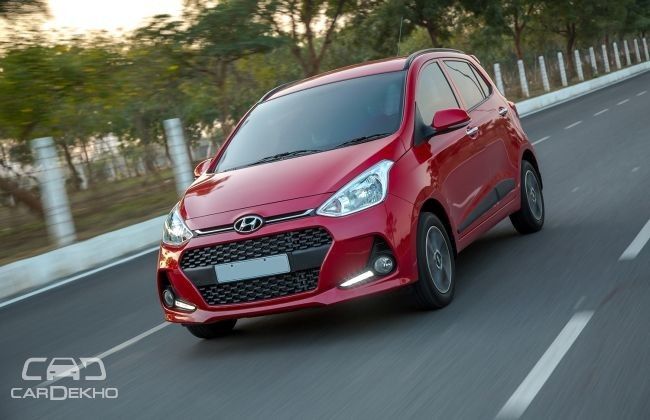 After a three-year successful run in India, the Hyundai Grand i10 has finally received an update. Apart from the cosmetic updates, the company has addressed one big chink in the pre-facelift Grand i10’s lineup - the underpowered 1.1-litre diesel engine. In its place, there is now an updated 1.2-litre diesel engine. Hyundai has also added some equipment in the top-end variants to freshen up things a bit. But are these updates enough for the Grand i10 to keep selling in good numbers in the wake of newer rivals such as the Maruti Suzuki Ignis? We took the 2017 Hyundai Grand i10 out for a short spin to find out how much of an improvement it really is. But before we tell you how it drives, let's see what all has changed inside out.

In terms of design, Hyundai has left the good bits untouched, and, therefore, the 2017 Hyundai Grand i10 isn't vastly different looking from its pre-facelift avatar. The major exterior changes revolve around the front and rear bumpers.

For the India-spec Grand i10, the fog lamps sit lower down on the bumper, whereas in the the international spec car has them sitting higher up in the trapezoidal grille.  The new boomerang-shaped fog lamp housing looks striking and is inspired from the Hyundai Elantra. It serves a technical motive too – deflecting the air around the front tyres to minimise turbulence and wind resistance. The hexagonal grille also gets a minor update with the sides of the grille are now slightly curved.

The rear bumper gets black plastic cladding that envelopes the licence plate and large round reflectors stationed on the two extremes. Not many may find it appealing, however, it is the most prominent design update that the 2017 Grand i10 sports.

Hyundai has added a new, more youthful exterior colour to the Grand i10 palette, Passion Red, which replaces the Wine Red colour. The Grand i10 also sports a new set of 14-inch alloy wheels. The interiors remain the same, and the dual-tone interior theme with black and reddish-brown combination that we saw on the European Grand i10 facelift has unfortunately not come to India.

Overall, with the design improvements, the 2017 Grand i10 may not look like an entirely new car, but it looks fresh enough to tackle the next  few years without seeming outdated.

The Heart Of The Matter – 1.2-litre U2 CRDi diesel engine

Does it change the way the 2017 Grand i10 drives? Well, the answer is yes. The improvement in the mid-range becomes evident as the revs climb, that's where the 30Nm of additional torque makes a difference. The in-gear acceleration appears to have improved, and that should make the overall driving experience more pleasant now. Driving the car at city speeds, however, made us realise that the engine doesn’t lose any steam below 1,750 revs too, and it still goes off the mark as before. However, the engine is noisy, and NVH levels only drop as the engine reaches optimum temperature.

You can feel the additional 4PS power on top when you push it hard, but the difference isn’t remarkable. Since we had a short stint only with the new engine, we’ll reserve our verdict on outright performance for later after we’ve tested the car thoroughly.

The diesel engine pairs up with the same 5-speed manual transmission and the gearbox is smooth to operate, precisely shifting every time you engage a new cog. The clutch is also light, and the Grand i10 diesel now looks like an improved car for both city and highway runs.

How does it move?

Nothing has changed in the ride and handling aspect since everything – from the suspension, platform and the steering setup is the same. The light steering and soft suspension make it a good car to punt around in the city but make it feel nervous as speeds rise.

The updated Grand i10 sports the same standard equipment as before – a driver side airbag and front power windows. It's the Sportz(O) and Asta variants that get all the flash –  rear parking camera with a display, 7.0 touchscreen audio system with Apple CarPlay, Android Auto, MirrorLink, voice recognition and smartphone navigation and LED DRLs. Additionally, the Asta variant gets automatic climate control, a feature that is part of the Grand i10 equipment list for the very first time. Hyundai has also added impact-sensing door unlock feature from the Magna variant onwards.

Our first outing with the facelifted Grand i10 has left us with mixed emotions. The changes aren’t a lot and for good reason –  this is one model that has been selling over 10,000 units a month consistently, prompting Hyundai to think why fix something that isn’t broke!

However, we wish there was more standard equipment on the lower variants. Like before a driver airbag is standard across the line however passenger side airbag is available only on the Sportz, Sportz(O) and Asta variants  However, ABS is only being offered on the top end Asta variant. This feels especially galling as cars like the Ignis now offer ABS and airbags even in the base variant.

The diesel engine has improved; in a sense, it is more drivable now. The addition of touchscreen entertainment system with Apple CarPlay and Android Auto and automatic climate control are welcome additions to the feature list that now put the Grand i10 almost at par with competition.

Hyundai has priced the 2017 Grand i10 smartly and it looks set to tackle the Ignis challenge squarely. So, the entry-level petrol Grand i10 sees a reduction in prices by a fair margin, and it is now pitched right alongside the Ignis at Rs 4.58 lakh (ex-showroom, Delhi). The automatic transmission has been added to the Magna and Sportz(O) variants, which was available on the top Asta(O) before. That has allowed Hyundai to bring the automatic Grand i10 a shade under Rs 6 lakh, and importantly, in closer proximity to the Ignis petrol automatic.

Taking advantage of Maruti Suzuki's strategy of not launching the Ignis diesel with the Sigma variant, Hyundai hasn't touched the prices of  the base diesel variant. Even though  prices for the top-end diesel have been hiked, the Grand i10  manages to undercut the Ignis Alpha by half a lakh Rupees.

Overall, the Grand i10 looks like a better deal now, with all the cosmetic, feature and engine updates. So even though the changes aren’t grand, Hyundai has done enough to help the Grand i10 retain its competitive edge, for a while.