I have recently bought a Tata Tiago NRG Petrol Automatic. I was so impressed by the performance, and I was most impressed by the huge ground clearance of 181 MM. When I went to Tata's Dealership they said that the car will give 22kmpl mileage while driving on highways and 18.5 in the city, but I am getting 14kmpl in the city and 21kmpl on highways, the mileage is very good on highways but poor in cities, so that thing I did not like of Tata Tiago. I have been going to a wildlife sanctuary near Pune, and it had many bad roads, but still, my Tiago performed very well on that bad roads. The car is very good. But Tata has done some cut corners in the quality of the interior. Safety is pretty good and builds quality is also impressive.

Van anyone tell me about its mileage 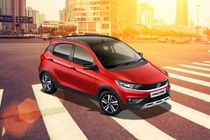