In a segment packed with excellent offerings, what makes Tata’s all-new Tigor worth considering? We put it through a thorough test to see what makes it tick 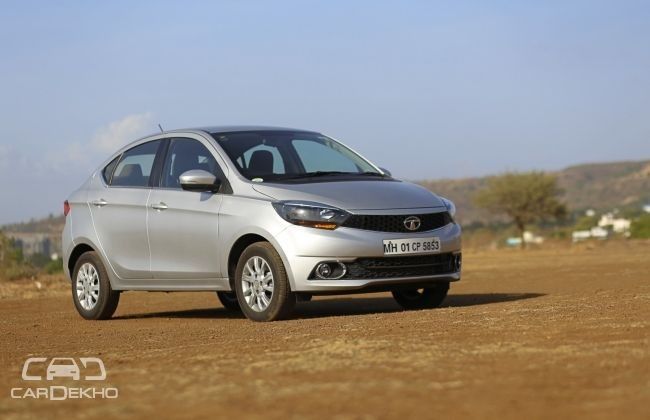 Tata Motors’ Impact Design language was first seen on the Tiago and has been received well. That the manufacturer is working on a compact sedan based on it was not surprising, and the initial concept was showcased at the 2016 Auto Expo. It has been a few months since the Tigor has been launched and it has been priced between Rs 4.59 to 6.04 lakh for the petrol and Rs 5.41 to 6.87 lakh for the diesel (all prices ex-showroom Delhi, post GST). At its price, the Tigor is the most affordable sub 4-metre sedan in the country. It comes powered by the same three-cylinder, 1.2-litre and 1.0-litre diesel engines as the Tiago.

The Tigor looks very similar to the Tiago from the front, though Tata Motors has added some subtle styling elements to make it look more distinctive, like the restyled hexagonal pattern on the front grille and smoked-effect headlamps to differentiate it. The top-spec XZ (O) variant gets projector beams, which the Tiago doesn’t. Similarities with the Tiago end at the B-pillar, as the Tigor’s rear doors are larger and make getting in and out of the car easier. The base variant of the Tigor diesel (XE) gets 13-inch steel wheels, the mid variant (XT) gets 14-inch steel wheels while the top variants (XZ and XZ (O)) get 14-inch alloy wheels. The tail lamps get sharp looking LED inserts while the large LED brake stop-light grabs attention, especially at night.

At 170mm, ground clearance is good enough to tackle rough tarmac and broken roads. Boot volume is class-leading at 419 litres and unlike the traditional boot lid anchoring, its unique four-link hinge engineering, that tucks neatly behind the taillamp enclosures, doesn’t eat up any luggage space. Tata Motors definitely deserves credit for keeping the overall design of the Tigor neat, practical and eye-catching.

There are a few misses though. There are no daytime running lights, rear fog lamps or retractable outside rear view mirrors. The boot lip is placed high which makes loading and unloading of heavy luggage a problem, and that is once you open the boot. There is no exterior unlock button, which means you either need to physically insert the key into the keyhole on the boot to open it or press and hold the middle button (used to activate the lead-me-to-vehicle lights) on the key fob. Another way is to insert the key into the ignition slot under the steering wheel, turn the ignition on and then press the electrically operated boot release switch on the centre console.

Similarities with the Tiago continue inside too, especially the dashboard that uses the same design. Glossy black plastic surrounds the infotainment system and central AC vents, unless you opt for the Copper Dazzle or Berry Red body colour where side AC vents match the body colour. The lower half of the dashboard gets light grey plastic, and some of them have sharp edges.

The steering wheel, instrument cluster and gear lever are the same as the Tiago’s too, though, seat covers are different. The center console has a number of cubbyholes, though, build quality isn’t top notch. Front seats are comfortable and offer good lateral support while headrests are adjustable and offer decent support.

The rear seat is just about good enough for three average sized adults, but a bit more under thigh support would have been welcome. The front seats are scooped out to offer better kneeroom and there is enough space underneath to stretch your legs further. Rear passengers also get ample headroom despite the sloping roof. The Tigor also gets a rear armrest with two cup holders. Some padding on the door-mounted armrests would have made sitting at the rear more comfortable though. The rear headrests are fixed but supportive nonetheless. However, they are large in size, and hinder rearward visibility while driving.

One highlight in the Tigor is its Harman-engineered music system with a four speaker and four tweeter setup, and the audio quality is easily best in class. A 5-inch touchscreen controls the system, and you get iPod, SD card and Bluetooth connectivity along with voice commands. Needless to say, the screen also doubles up as display for the rearview camera.

Tata Motors also has its own app suite now called ConnectNext, which currently only supports Android smartphones. The apps offer a host of services including onscreen navigation, emergency assist services and also store your car’s service history. The screen’s touch sensitivity could have been better and there is a bit of a lag when switching between two features. Also, the screen is not very legible in direct sunlight. The Tigor also gets automatic climate control, and the cooling is good enough for rear passengers to not miss dedicated vents. The blower is a bit noisy though, and is audible even at low fan speeds. Other features include a black and white information display between the clocks and a height-adjustable driver’s seat.

The steering is also tilt-adjustable and there is a cooled glovebox along with two 12V power sockets, with one in the centre console and the second next to the handbrake. The Tigor is generously equipped for its price, but it does miss out on a few features that are becoming commonplace. For instance, it doesn’t get height-adjustable seatbelts and the infotainment system does not support Apple CarPlay and Android Auto.

The Tigor diesel is powered by Tata Motors’ 1,049cc, 3-cylinder turbocharged Revotorq diesel engine. It offers 70PS of power and 140Nm of torque and comes mated to a five-speed manual gearbox. Start the engine and a bit of vibration comes in from the gear lever and pedals, but otherwise the engine feels smooth. Gear ratios in the diesel are taller to improve fuel efficiency, but the taller ratios and turbo lag below 2000rpm mean you need to constantly change gears in city to stay in the meat of the powerband. Power kicks in just under 2000rpm and delivery is smooth and fluid up to about 4000rpm. The engine redlines at 4500rpm, though, only the needle turns red, as there is no marking on the tachometer.

The engine and transmission make the Tigor diesel easy to drive in city as long as you keep the engine in the correct rev-range. The clutch is light, predictable and easy to use even when stuck in traffic for a while. Gear changes are pretty smooth and don’t call for much effort in terms of the shifts. The Tigor feels stress-free to drive on open roads as well as long as you are cruising at constant speeds. Overtaking fast cars and bigger vehicles calls for some effort and even when you rev the engine hard, the performance is underwhelming. The motor offers just about adequate performance in the city but on highways you are left wanting for more power.

The Tigor took 17.75 seconds to accelerate from 0 to 100kmph in our tests, which is not too quick. In-gear accelerations were not very quick either, as the car took 20.2 seconds to accelerate from 40kmph to 100kmph in fourth gear. What is really impressive though is the Tigor’s fuel efficiency. The car returned 17.43kmpl in the city in our tests, and the number went up to 24.31kmpl in our highway tests. Mind you, the Tigor is a heavy car with a kerb weight of 1130kg, which is 140kg more than the diesel-fed, top-spec Maruti Suzuki Dzire.

We start with some bad news. The engine clatter is audible inside the cabin even at idle. Engine noise goes up as you build speeds, as do road and tyre noise. Cabin insulation could thus have been better, as the noise levels may cause fatigue over longer drives. There are some really good bits too though, like the ride quality. At city speeds the suspension gobbles potholes without letting any of the harshness creep into the cabin and the ride quality is really good on most surfaces.

The steering weighs up well at speeds but could have offered more feedback. Corner stability helps keep the car composed around corners which offers confidence along with the grip from the tyres. The Tigor feels composed doing high speeds on open roads, though bumps are transmitted to the cabin on undulated highways. Brake feel is spongy and the brakes could have offered more bite too for a more reassuring feel.

Dual airbags and front seat belts with pre-tensioners and load limiters are exclusive to the XZ and XZ (O) variants. The lower, XT variant gets rear parking sensors in addition along with ABS, EBD and corner stability control. The base-spec XE gets none of these features though.

With the Tigor, the bar of our expectations from a Tata product has been raised once more. But, just like every other car, the Tigor has its flaws. The laggy infotainment system, the availability of ABS and Airbags on only the XZ and XZ(O) variants are some shortcomings that can be worked around. The overall sense of quality although not class leading, is satisfactory. The biggest letdown on the diesel Tigor is the small engine that is just satisfactory for city use but runs out of breath on the highway. This limits the Tigor’s usability to a great extent and is best thought of as a chauffeur driven vehicle in the city.

If you can treat yourself to the back seat, the ride quality, the space, and comfortable seat would be genuine treats. The stellar music system deserves a mention too. The Tigor is a very sensible sedan from Tata. Yes, it doesn’t have the legs to match most of its expensive rivals in the same segment and that it can do with more refinement in built quality. But, it’s frugal, practical and masks its shortcomings to some extent by undercutting its rivals aggressively.