For over 30 years there has been absolutely no challenge to Maruti when it comes to small family cars. But Renault did something which no one expected -- it gave India an alternative to the Alto with the Kwid. Its SUV-inspired looks and first-in-segment features were successful in garnering huge interest. To up its premium quotient further, the 1.0-litre and AMT variants were also launched. 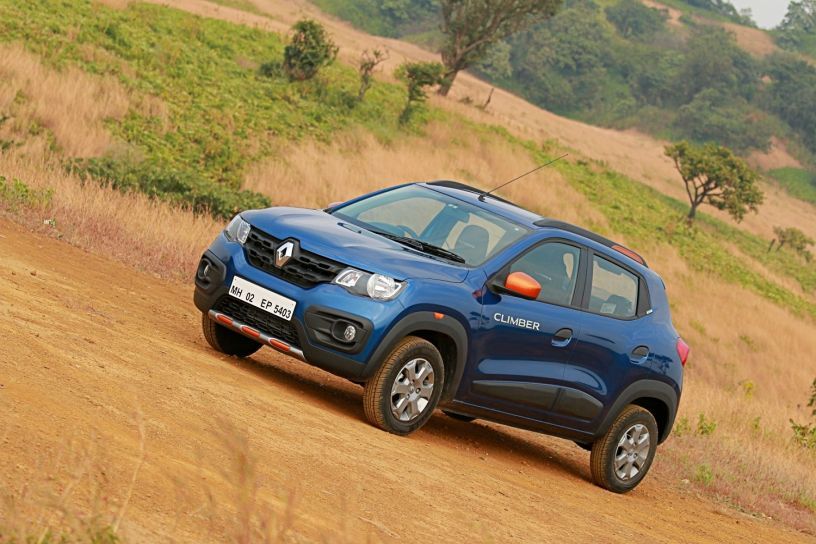 So the Kwid has plenty of style, but does it pack substance? Does it make for a good first car? We drove the Kwid Climber and the Kwid AMT for answers.

It looks handsome. Taking style cues from a conventional SUV design, the Kwid gets an upright stance with a high bonnet, bold grille and cladding all around. This is further enhanced by the 1579mm width of the car, which is considerably more than any of the competition. Further, the Kwid has a SUV-ish ground clearance of 180mm, and yet it sits lower than other cars like the Alto and redi-GO, to complete the muscular look.

The rear styling may seem a bit plain but only when compared to the more striking and bold front design. Standout bits include wraparound tail lights and black bumpers that lend character to an otherwise simple rear.

Now, let's get specific. The AMT (in red) looks exactly like the manual 1.0-litre Kwid, save for an easy-R badge on the boot. It gets the side chequered graphics and the silver finish ORVMs like the 1.0-litre sibling.

The Climber, on the other hand, is fully tricked out. The blue and orange stands out quite well and the new fog lamp cladding, skid plate and roof rails add more muscle to the design. The Climber gets steel wheels, even though they have been designed smartly to resemble alloys. Overall, if you are looking for something funky/quirky or wish to own a hatchback that stands out from the crowd, the Kwid fits the bill.

Step inside the Kwid and it feels spacious. For a small car, the cabin feels quite well laid out. The steering is well contoured for good grip and and the instrument cluster has a bold readout for the speed. But the highlight of the Kwid's interior is the 7-inch touchscreen infotainment system. It's the same unit as in the Duster and while some may find it to be placed a bit lower in the Kwid, the fact that it is present in an a car of this segment is a huge plus point.

The seats have soft cushioning and are well bolstered to keep the driver and passenger comfortable over even prolonged city travels. The integrated headrests in the front seats are also not very intrusive and help improve the comfort factor. The front seats get a simple two-way adjustment and are set a bit on the higher side. Taller drivers may find it hard to get into a comfortable position since the steering column is fixed and cannot be adjusted for rake or reach. Average height drivers like me (I am 5 feet, 7 inches tall) can get into a somewhat suitable position after tinkering around with the seating adjust.

The touchscreen infotainment system gets inbuilt navigation, Bluetooth connection and radio. It’s paired with two dashboard-mounted speakers which offer adequate sound quality. Additionally, USB and Aux connectivity is available. You also get a powerful manual AC, front power window and a fully digital instrument cluster with speed, odo and drive mode in the AMT. A gear position indicator could have been useful.

The rear bench is relatively flat, and the long seat base provides good under-thigh support. Dial in the soft cushioning and the passengers can sit in comfort. Seating three adults is a squeeze, but two average-sized adults and a child can be accommodated. Legroom is surprisingly good, with a decent amount of headroom on offer. At the back, you have well designed integrated headrests which offer adequate support without becoming intrusive.

All of the above mentioned points remain similar for both the AMT and the manual Climber. But, where the AMT gets black fabric seats with red contrast at places, the Climber’s cabin gets a different pattern on the fabric and funky orange accents on the seats, dashboard, door pads and the gear lever. Also, you get Climber badges on the steering wheel and the front headrests.

In terms of practical storage places, the Kwid offers a lot. There are cupholders and a flat storage area in front of the gear lever, one behind the gear lever, an opening in the dashboard on the passenger side, dashboard-top glovebox, standard glovebox and a massive 300 litres of boot space; all considerably more than the rivals, and even hatchbacks with a much higher price tag. In fact, in the AMT, there is even more space to store knick-knacks thanks to the clever omission of a transmission lever but more on that later.

Despite the practicality on offer, the cabin experience does leave you wanting more in terms of the overall fit, finish and build quality. The plastics are hard, and though that’s expected from a car in this budget, you always end up wanting more, don’t you? The plastic quality of the centre AC vents, for example, is something Renault could have looked into; the flaps don’t stay put in their intended position when you set the blower to max. The air circulation slider also doesn’t move smoothly.

Moving to the AMT, the shift dial is a rather convenient and unconventional touch. The rotary knob takes some time getting used but its inclusion in place of a shift lever has freed up space for an extra cubbyhole that’s deep enough to hold a water bottle. There are only three modes  - neutral, reverse and drive. The default position is neutral and you can switch to reverse or drive by turning the knob left or right respectively. Once again, the quality and fit of the dial could have been better. Shifting between modes does not give a sure click. Those with long legs also need to keep their knee away from the dial so as to prevent an accidental switch to neutral.

But get going and the engine feels refined, the power delivery is quite linear, and the car gets off the line swiftly. And, unlike other small cars that run out of steam quickly as you push them hard, the Kwid keeps pulling. It isn’t particularly quick but there is enough grunt available for overtakes. This makes it easy to drive in the city as well, even for someone who is relatively new to driving.

On the highways, the Kwid easily goes past (and maintains) 100kmph. Plus, it feels like it has enough in reserve for overtakes, which is quite impressive. But should you use it? We will discuss that later.

The manual gearbox is not smooth, but the short throws and well-defined gates allow for easy gear shifts. The Kwid is also unique in its segment for offering a gear stick with a reverse lock, which is operated by pulling up a ring under the gear knob. The light clutch adds to the overall easiness of shifting gears.

It is a good thing that the gear shift is easy because you will be shifting gears quite often in the city. The lack of low end grunt from the engine and taller gear ratios mean keeping pace with the rest of the traffic in the city requires regular pedal and gear inputs. A workaround the constant gear shifts is to slip the clutch when in higher gears; an easy to learn procedure, but it will cause increased clutch wear. Drive gently and the Kwid rewards you with higher mileage, as you find a bit later.

Where the gearshifts on the manual were clean, things are different with the AMT. It does not have a creep function, which means unlike conventional automatics, it will not start moving as you lift off the brake. But movement off the line is smooth and can be controlled easily. On the move, the gearbox knows what it’s doing. It knows when to shift up, or drop a gear. If you drive at a leisurely pace, without trying to get into gaps, the AMT offers a hassle-free drive, no questions asked. It will even pull in the same gear if you are gentle with the throttle.

But every time there is a gear shift, you end up losing quite a bit of momentum. That explains why the AMT was 3.5 seconds slower compared to the manual in our 0-100kmph test. The manual clocked the ton in 13.90 seconds, whereas the automatic took a leisurely 17.44 seconds. Also, when you’re driving quickly, the slow gear changes and the head nod associated with AMTs becomes all the more apparent.

Finally, the automatic is not just slower, it’s thirstier too. The manual was frugal, returning 20kmpl in the city and 23.02kmpl on the highway. The automatic was substantially thirstier at 16.28kmpl and 19.09kmpl respectively.

The only parameter where the AMT is tangibly better is braking. The automatic needed 53.16 metres to come to a dead halt from 100kmph, whereas the manual needed 57.02 metres. Since there’s no ABS, the wheels tend to lock up easily under such heavy braking. It isn’t too confidence inspiring as the car tends to squirm and wiggle a bit. That said, you shouldn’t have a bother inside the city - the bite seems apt, and there’s enough feedback from the pedal too.

The Kwid is primarily a city car and so the suspension is set up a bit on the softer side and this gives it an excellent ride quality over potholes, broken roads or speed breakers. The light steering makes for effortless progress in the city and tight corners and u-turns are dispatched off with ease. But this softness tends to become an issue as the speeds increase. At around 60-65kmph, going over broken roads makes the Kwid feel a bit floaty and this feeling increase as the speedometer display nears triple digit speeds. The skinny tyres, don’t help matters either and so you’re better off staying within city limits where the Kwid is perfectly at home.

At Rs 4.24 lakh (ex-showroom Delhi) for the Climber MT and Rs 4.29 lakh for the AMT with the airbag, the Kwid is just Rs 14,000 dearer that the Alto K10 AGS and while the AMT in the maruti is more refined, the Kwid has looks and space on its side. The bigger and better built Tiago XTA is also within reach at Rs 4.79 lakh and is worth considering if you have the budget.

As we’ve said, it’s not without it’s flaws with the standard of materials and it’s highway manners having room for improvement. But if you are looking at the Kwid as your first car, something you’d use primarily inside the city - it’s worth considering. The AMT simply bumps up the convenience quotient of the tiny hatch for day to day use. What’s appreciable is the sheer amount of space the car has to offer, be it inside the cabin or in the boot. This should make for a nice second car for the house too, for those quick trips to the mall or the early morning school runs. So summing up, the Kwid does make some sense under all that SUV-inspired funk. It’s at home inside the city, and if that’s what you want it’s more than willing to deliver.