Nissan India had been a slow starter in India with only 2 models the Luxury Sedan Teana and the SUV X Trail both as CBUs for India. The Micra was the first small car that it launched for India and also set up a large manufacturing unit at Chennai jointly with Renault especially for the Micra. The Petrol Micra hit Indian roads a few months back is selling in decent numbers and Nissan is also exporting the Indian built Micras to many countries. Off late to play the number game in India every car model must have a Diesel variant and Nissan quickly realized this and got the Diesel version of the Micra. The Micra Diesel uses the tried and trusted 1.5 litre CRDI Diesel engine from its sibling the Mahindra-Renault Logan code named K9K. To know more read on the review of Nissan Micra Dci.

The Nissan Micra Dci from the outside is identical to the petrol sibling, its rather cute and looks very refreshing and has an sort of retro look to it. The Micras headlamps and the front end remind you of the Porsche, the cute pushed back rounded lights go with the overall rounded look. The large bumper up front looks sporty along with the air dams that go way down. A large round Nissan logo on the bonnet shouts its branding. The front grille is made up in two parts with a thick chrome strip running across Micras face. The side profile of the Nissan Micra Dci is very retro and has the classic round cut on the rear window quarter glass. 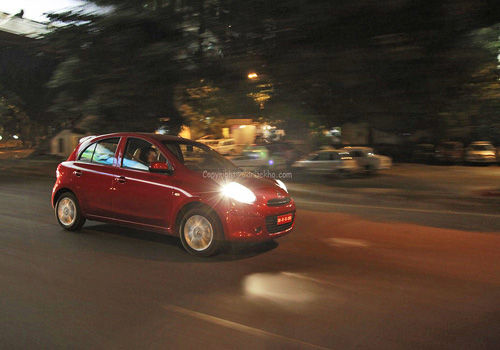 The round sloping roof and the rear end with its perfectly curved window and the slightly bulging tail lamps give it a Volkswagen Beetle kind of look. The rear as mentioned is very classy with the protruding tail lamps and a all new rear spoiler that the Diesel Micra gets. Also noteworthy here is the smart keyless entry where one can unlock the car without the keys by just pressing the button on the front door handle, provided you have the car remote with you, a real smart touch that even cars much bigger and expensive don’t have in India.

The Nissan Teana has this keyless entry feature. The roof also retains the boomerang shaped slits giving the top a aerodynamic touch. The other noticeable change is the addition of the 15 inch alloy wheels that help the drive in a big way, you will read about that in the drive part of my review.

At the rear you get the dCI badging that proclaims this car as the Nissan Micra Diesel. Fit and finish on the outside is very good, the doors open wide aiding a comfortable entry-exit. The Micra looks smarter now with the upsized 15 inched alloys that go very well with the cars overall shape and design.

The Nissan Micra Dci interiors also remain unchanged as compared to the petrol sibling. Interior of the Micra is very fresh and has a bright feel to it thanks to the use of light colors on the upholstery and dashboard plastics. The round theme is carried in the cabin and everything has a very round feel to it. The Instrument cluster is well designed and easy to read.

The MID or multi info display is placed in this cluster that tells you the trip meter, distance the car can travel with the diesel in the tank, overall average, and instant average of the car. The Steering now has the Nissan logo in chrome which the Petrol Micra still lacks, a fake metal plastic inserts on the steering and on the gear knob. The Climate control is again based on the round theme and looks very well designed.

The Nissan Micra Dci has a single glovebox and misses out on the extra glove box which is on the Petrol sibling has. MP3-FM radio comes as standard and the audio quality is very audible and clear and also has the AUX input port to connect your Ipod. The gear changer gets the fake metal touch and now feels much better to grip. Front seats are very comfortable but the driver seat misses out on the height adjust that the Petrol Micra has.

Rear seat is bench type with integrated headrests; these are not 60:40 split seats. Interiors are made of high quality material and the fabric used on the seats etc is also of good quality. The smart keyless start stop button is very clever touch so is the electric auto-fold mirrors on busy traffic city roads where you are always at the risk of touching the mirrors to a pedestrian or another vehicle.

Everything in here feels and works very well. A dead pedal-clutch footrest would have been more than welcome in here never the less the clutch is very light and not much foot pressure used to engage and change gears. Driver side airbag comes standard but the passenger side air bag is sorely missed. Overall the Nissan Micra Dci has a very roomy and fresh interiors among all other cars in its segment.

The clever thing that Nissan did was to utilize the Mahindra- Renault Logans Diesel engine on the Micra. This 1.5 litre CRDI engine codenamed K9K is an eight valve engine that produces 64 PS @ 4000rpm and generates 160Nm of torque as low as 2000rpm. The K9K engine is one of the most selling engines from the French car maker and has been doing an able duty on the Logans here in India.

This engine has the power to weight ratio advantage on the Micra as the Micra is much lighter than the Logan so performance and efficiency has drastically gone up. Crank the engine and the 1.5 dCI comes to life, the Diesel clatter is not very evident in the cabin thanks to the good job that the cabin noise dampers that Nissan has used. The engine is smooth and feels refined when revved.

Engage the first gear and the Nissan Micra Dci once on the move builds speed in a very sedate fashion, don’t expect instant pickup with the turbo kicking in but the Micra Diesel has a very linear power build up which is best experienced in the 2nd and the 3rd gear. Power is good enough and the pickup is good. Overtaking is easy and the Micra Diesel never feels out of breath. There is no turbo lag at any RPM as on a few 3 cylinder diesel small cars.

The drive feel is responsive and the Nissan Micra Dci sings away and crosses 100kmph easily on third gear. The upsized 15inch alloys also help in the drive quality and the car now feels very planted at all speeds. The Nissan Micra Dci touches the 100kmph speed barrier in about 15.3 seconds which is not bad at all. The gear shifts are positive and crisp and the ratios are tuned for a mix of city and highway driving styles. The suspension setup also remains ditto like that of the Petrol Micra, McPherson Sturt on the front and Torsion beams at rear iron out the bad roads that you put the Micra on.

With the Nissan Micra Dci, Nissan surely is taking the Indian market very seriously. The Micra was always a very good car and now with the able Diesel engine plunked in makes it a irresistible car with super high fuel efficiency figures that none of the competitors can match yet and smart innovative features like the keyless entry-exit and button start-stop which even cars much bigger and costlier than the Micra don’t have.

Priced at Rs. 5, 85617 Lakhs for the XV and Rs. 6, 33849 for the XV Premium Ex Showroom Mumbai the Nissan Micra Dci sure is one of the best options that you can ask for currently if you want a Diesel Hatch that looks trendy and is high on efficiency too.