BMW X3 is Germany’s prime star in the compact SUV sector. X3 came into foray as a young successor to BMW X5, in 2004. X3 received a worldwide fanfare unexpectedly though it had nothing specifically taunting in the looks. The success of X3 prompted the rivals also to follow the same trail. But BMW took a further leap by introducing the X1. And the new version of X3 also followed suit in 2011. 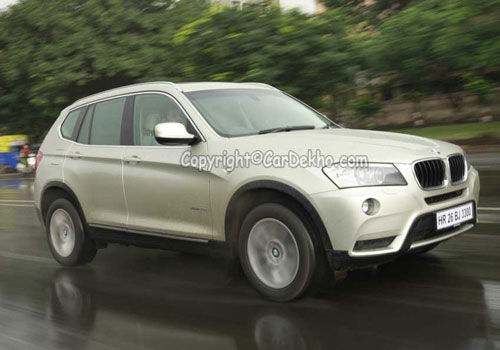 BMW X3 belongs to the F 25 series. The company renewed the previous version of X3 by increasing the size. The reason behind the size increase is the launch of X1 too into the compact SUV sector. X3 was first manufactured in the US plant of BMW. It is sold in India by assembling the car in Chennai plant where it is brought through CKD.

The new X3 has a front design that is different from the other models of BMW. The flat headlights and the kidney grills that stand upright add on to the new looks. The bumper is alike that of the X5 with a blend of black and aluminum. The character line on the bonnet is also new. It does not have many differences from other BMW models apart from the fender.

The shoulder line and the roof line are similar to that of X5 and X1 which gives X3 the majestic appearance of an SUV. The rear part is very similar to that of X5. The T design tail lights and the character line that extends up till the rear speaks volumes about the rich BMW lineage. X3 has some commendable boot space too. Moreover, rail lock and a facility to charge laptops are some novel features that make X3 very modern, up to date and distinguished.

The interiors are very luxurious as in every BMW car. There is an i-drive LCD monitor in the mid area of the dashboard. In 20D it’s a 6.5 inch monitor and in 30D, there is an 8.8 monitor. In both the models the multi functional steering are also different. In 20D the steering is leather bound whereas in 30D the steering is a sports model. Yet the buttons on both these are not different in any way. There are no other changes in both the variants except these two mentioned before.

The switches and buttons on the centre console are alike in both the models of X3. The seats are designed in such a way that five people can be accommodated comfortably.

The front seats are the most attractive piece as in any other BMW. These seats can be adjusted in various manners according to our comfort, electrically. The rear seats are positioned a bit low but the new X3 is more spacious than the previous version.

In India two diesel engine options are introduced. The 20D version, that I tested, carries a 1995 cc in line four cylinder engines. This has a power of 184 hp and a torque of 380Nm. The 2993 cc in line six cylinder engine in 30D can produce a power of 258 hp and 560 Nm torque. Both the options have an 8 speed automatic transmission. In addition to this both the models have the BMW all drive system known as X Drive.

The feature that I found the most interesting in the new X3 drive is the “stop and go” mechanism. It works like this - When the car is stopped at a traffic signal the engine gets turned off automatically and then the engine will start running again automatically as the brake is reduced or when the steering is manipulated. This mechanism is also available in Mahindra Scorpio micro hybrid. Yet this feature is new in the luxury segment.

This feature will reduce environmental pollution and also increase fuel efficiency. According to the statistics by ARAI an X3 delivers a mileage of 16 km per litre which is a lot for a Luxury SUV in this segment.

There is nothing to be criticized in the X3 ride as the tyres are high-profile. The ordinary BMW cars offer a hard ride but X3 ride is comparatively soft. The suspension is especially suitable for the ride. The reason for the comfortable ride that X3 gave on rough roads is nothing but the suspension. This suspension feature does not bring any lowering in the driving dynamics.

The X3 performance is actuated in such a way that maximum power and maximum torque can be enjoyed in a very high mode. The gear box is the main strength of this engine. As down shift is easily done torque can be utilized to the most and overtaking is made simple.

The four wheel drive system called X Drive is used to improve traction. An efficient grip is enabled in muddy roads and sharp turns due to this feature.

The X Drive feature will help in tough road conditions though it is not a complete off-roader. The overall drive is very BMW like and the SUV feels planted across all speeds and terrains a big reason being its intelligent drive control system. A new X3 now feels a lot more fun to drive and can be an owner’s pride due to its grown up larger dimensions.

The X3’s destiny is to become a strong contender in the growing Indian luxury car segment and the fast growing SUV sector.

The BMW X3 which belongs to the class of Audi Q5, Land Rover Freelander and Volvo XC 60 might even pose a threat to the market share of its bigger version, which is X5 due to its spot on pricing which now makes it a very good option for its segment.