AMGs! All of them are ferocious monsters that cannot be tamed by all. AMG is the high-performance division of Mercedes-Benz that produces tyre-pulverizing, tail-spinning V8 or V12 engine powered machines. You can’t utilize all the power of these engines unless you are driving on a track. Hence, for those AMG enthusiasts who do not take their cars to the track, Mercedes-Benz has introduced the C250 AMG Performance Edition. Similar to the AMG kitted, M-Class that was launched earlier this year. 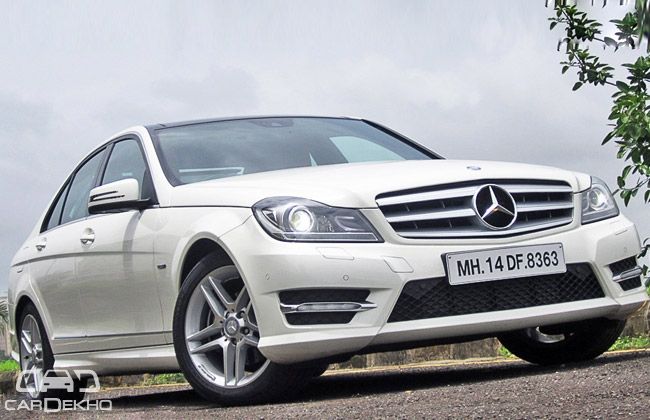 This version comes loaded with the AMG armory, while the mechanicals remain untouched. Mercedes-Benz had initially limited the number of these cars to 100. After seeing the response, the Chakan-based company has increased the number to 300, and we believe the numbers are likely to further see a hike. So, we took this version of the C-Class for a spin. Dig deeper to find how the mystery unfolds.

The recently titivated version of the C-Class had received a sea of changes on the outside. These alterations make the C-Class look more sporty and younger in the styling department. Headlamps and bumpers have been altered.

The headlamps are pulled back, the turn indicators are now LEDs and the day-time running lamps now come integrated into the bumper.

The silhouette remains the same, however the design of the alloys have been changed. Also, the roof is now blacked-out. The rear looks more sporty with the revision of the tail lamps, which are LED powered.

Apart from these changes, the AMG Performance Edition gets some more changes. The AMG kit for the front and rear bumpers, side skirts and the gorgeous-looking AMG alloy wheels have been added as the cosmetic add-ons to this version. This is a perfect car for those who prefer styling over performance. As the engine is a four-cylinder mill, there is only one exhaust pipe and no fake twin pipes are given at the rear.

The interiors on the facelift version of the C-Class have been completely revamped. It feels that the designers from Mercedes-Benz had been sketching a completely new instrument panel for the facelift version. The old four-spoke steering wheel is now replaced with a more-trendy looking three-spoke steering wheel. The buttons on the multi-functional steering wheel looks classier than the outgoing version. The Performance Edition gets a sports-car steering wheel, from the AMG spares spectrum. The instrument cluster has been redesigned and three-dial binnacle looks more impressive.

A completely new centre console has been crafted, and this somewhat resembles its elder sibling—the E-Class. The COMAND knob is easy to use, once you get a hang of it. The lavished leather seats aren’t just well bolstered, but are comfy as well. The front seats are large and are supportive, while the rear is wee bit tight on knee room; the intruding central tunnel means the second row can strictly accommodate two passengers. The boot is large enough to swallow all the clobber for four for a weekend trip. The interiors are exactly like that of the C63, and Mercedes-Benz has maintained the same quality standards like its AMG twin.

The AMG Performance Edition has got only cosmetic upgrades, while most of the mechanicals remain untouched. The AMG Performance Edition however comes with only C250 CDI option. This variant is powered by a 2143cc oil burner that churns out 204bhp at 4200rpm of power and a crest torque of 500Nm between 1600-1800rpm of crest torque. NVH (noise, vibration and harshness) levels of the engine are low and there is very minimal clatter, which is also taken care by the insulation. It is only at higher revs, when the engine is audible. Power for overtaking in city or highways has never been a problem in any of the luxury cars.

The self-shifting transmission feeds to the rear wheels. Plant your right foot and the engine responds with some latency. It is the transmission that blunts the performance of the engine. The transmission isn’t lethargic; it is just that it isn’t as quick as the other dual-clutch boxes that shift at the blink of an eyelid. The flappy paddles mean you can enjoy driving around bends and tight corners. These paddles are fairly responsive. The C250 CDI now also gets the ECO switch on its centre console. This is an electric start-stop system, which switches off the engine when you stop at a traffic signal for more than a few seconds. This helps to save fuel. However one also has the option to switch off the ECO mode.

This AMG-kitted version is a cosmetic update, although one change has been made in its underpinnings hardware. The suspension has been stiffened on the C250 CDI for enhanced driving. Yet, there isn’t much of a difference in its ride quality. In the comfort mode, it is the same like any other Mercedes-Benz. The car glides over potholes and majority of the road shocks and vibrations are absorbed by the dampers. In the Sport mode the suspension is wee bit stiffer, and the difference is quite imperceptible and won’t come to your notice unless you are the more attuned one.

The C-Class always been a good handler, and once engaged in the sport mode the handling characteristics are further improvised. The throttle and steering response is sharper, also there is an improvement in the alacrity with which the chassis responds. The paddle shifts also come to the aid, while driving on winding roads.

The C250 AMG Performance Edition is a good product on the offering. However, there is one nitpick. The Performance Edition moniker doesn’t justify the name as it doesn’t enhance the performance. But getting these extra bells and whistles for an additional Rs 75,000 is a steal. Hence, if you are looking at buying a C250 CDI, we will highly recommend picking the AMG-kitted version as this has more brownies without much of an increase in the final cost.