Published On Jun 21, 2013 By Rahul for Mercedes-Benz A-Class

Recently we had driven the A-Class is Germany, but now we have this hatchback in the country as the new entry-level product in the three-pointed star portfolio. The Stuttgart-based manufacturer is the first to introduce a premium hatchback in India and soon others are following too. The Volvo V40 is already here and BMW has begun the promotion of the 1 Series. We were impressed with the A-Class in Germany, and now we see how good is the Indian spec car are. Read further as we share our review. 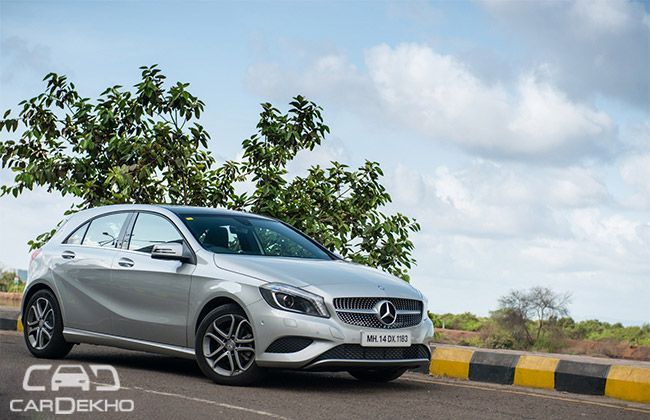 The first thing that you notice on the Indian spec A-Class is the star front grille, which has 302 stars and this changes the complete styling of the car. This grille is optional and it costs about Rs 72,000 as an extra fitment. The design of the alloy wheels has also been changed for India.

The crowned hood gets the prominent strakes, while the new LED cluster design makes the headlamp look like a hawk’s eye. A crisp line begins from behind the front wheel and rises gradually to the tail lamp. The black-coloured DLO and the shallow greenhouse amplify the aggression. The A-Class is definitely an attractive hatchback, and it does appeal to the youth.

Mercedes-Benz has continued with the styling on the inside too. The A-Class gets a trendy instrument panel— even though it has been derived from the B-Class. This new centre console design will be common on most of the MFA platform vehicles.

There is an infotainment screen— controlled by COMAND— circular vents and a sportier steering wheel. The quality of the materials used is top-notch and it doesn’t feel that anything has gone missing in the vehicle. The insulation of the cabin is good as no sound intrudes into the cabin.

The front seats are large and offer good amount of thigh and side support. These are good even for long distance travel. The seats at the rear have decent space, however thigh support could have been better. Also, the small glass area makes the cabin feel less spacious. The boot is large enough to gobble luggage for two for a weekend.

The A-Class has iPhone integration where one can sync in their contacts and even use the Internet including some social media applications developed by Mercedes-Benz like Facebook etc. so all this can be displayed on the screen. The driver’s seat is electrically adjustable, however the co-driver’s seat has to be manually adjusted. The petrol variant gets the sunroof, while the diesel misses out on this.

A-Class will be available with two engine variants, 1.6-litre turbo petrol and the 2.2-litre turbo diesel. The 1.6-litre turbo petrol whips a maximum power of 122bhp and this is the same mill that also powers the B-Class. The NVH levels of this engine are fairly low and it is refined just like any other Mercedes-Benz petrol engine. The power delivery of this turbo petrol is linear, however there isn’t much of a boost from the turbocharger. Most of the power is produced between 4000rpm to 5500rpm and you need to work out a bit to extract maximum performance from this four-pot mill. Overtaking isn’t much of an issue either.

The seven-speed dual clutch transmission has quicker shifts than the 7G-MATIC that transfers powers on other three-pointed star vehicles. Even the A-class gets the gearshifts on the steering column. There is also the 2.2-litre diesel engine, which has been detuned to produce 109bhp. This is the same oil burner that powers the C-Class, but with a higher power output. This engine also comes mated to the same seven-speed DCT box and powers the front wheels of the A-Class.

A-Class is the second front-wheel drive Mercedes-Benz for India, and it shares the same platform with the existing B-Class. Despite it being the smallest of three-pointed star, it is a Mercedes-Benz in every aspect. The ride is compliant and smooth at low and high speeds. The suspension does a good job of absorbing the bumps and filtering all the road shocks from reaching the occupants.

The A-Class handles fine even when pushed to the limits. It is the tyres that begin to squeal even at the slightest hint of hard cornering. The steering wheel is also light and the feedback is good. The rough-road package on the A-Class has increased its ground clearance and the vehicle does drive easily over bumps and potholes without scrapping its underbelly.

The A-Class is attractive, stylish and sophisticated. The new front grille does add more glam to it and even the powertrains on offer have good power on offer. The A-Class is the new age Mercedes-Benz targeting a new set of customers. Mercedes-Benz has been successful in creating an absolute cracker of a product, however as this is a CBU it costs in excess of Rs 24 lakhs even for the base model. The diesel is the base model with all the must haves, while the petrol is the top-of-the-line with all the bells and whistles one will want in a luxury vehicle. You can get a compact luxury SUV at a little more cost.