Published On May 02, 2013 By Rahul for Mercedes-Benz A-Class 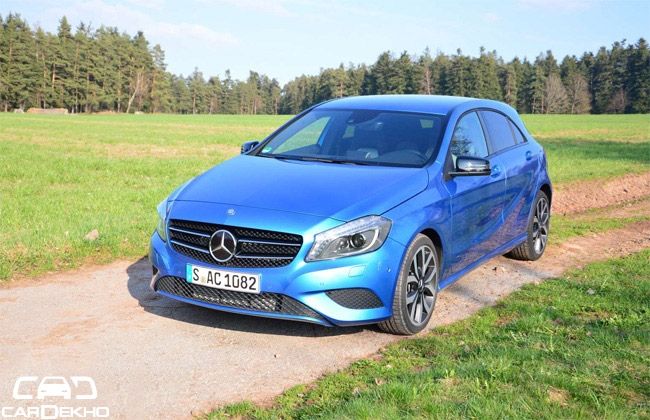 Despite the slowing auto-market, the luxury car market has been witnessing a double-digit hike in sales. Luxury car manufacturers have been diversifying their portfolio to cater to larger set of audience and further boost their current sales numbers.

First it was the entry-level SUVs and now comes the turn of premium hatchbacks.

There have been several talks about the Mercedes-Benz A-Class and the BMW 1 Series and several enquiries have come to us about these hatchbacks. Hence, we visit Germany to drive the A-Class in its home territory before its official arrival on the Indian shores.

The biggest weapon that the A-Class has its design, as the German manufacturer as it meant to attract the youth. The A-Class doesn’t carry of the design DNA of its predecessors. It isn’t tall and compact, but is it a stylish hatchback with several crisp lines and curves that makes it contemporary and voguish.

The A-Class is based on the MFA platform and hence it is a front wheel drive vehicle. It gets the fascia like that of any other new Mercedes-Benz with an Avantgarde-like front grille and eye-brow like LED-arrays in the headlamps. The side profile of the A-Class is fairly muscular with the crisp swage line and shallow greenhouse that makes it more aggressive and sporty.

The rear of the A-Class does remind of a Mercedes-Benz, as it wears the three-pointed star lgo and the tail lamps are pulled to the C-pillar. The styling of the A-Class is fairly pronounced and the design team has done a phenomenal job.

Mercedes-Benz is following its new design styling for instrument panel and the same is reflected in the A-Class. The A-Class gets the same screen and the round AC vents, like it did back in the 80’s. We had seen a similar design on the B-Class and were impressed with it. The same styling cues are transferred to the A-Class as well. The overall styling of the interiors is good and even the quality of the materials and the fit and finish is no different from any other Mercedes-Benz product.

The biggest advantage that the A-Class gets is space. Being a front wheel drive, a lot of space is freed up as the engine bay is smaller. This means more cabin space for the occupants. Two six-footers can sit back to back without any squeeze for legroom, however the headroom at the rear is a wee bit tight. The lesser greenhouse also means the cabin feels to have lesser space, but it doesn’t hold true. Even the boot of the A-Class is large to hold luggage for 3-4 people even if it’s a weekend baggage. The driving position can be adjusted to low slung, however the only drawback is the visibility at the rear. Even though that is taken care by the parking camera. Now, you can sync in your iPhone data into you’re a-Class and operate several applications without even looking into your phone. The phone display appears on the screen and it can be controlled by COMAND. At the moment devices only up to iPhone 4S can be connected as the socket supports those phones only. The company is working on the iPhone 5 integration-software at the moment and the upgrade will be available soon.

Mercedes-Benz is offering two engines on the A-Class, 1.6-litre petrol and the 1.8-litre diesel. The 1.6-litre petrol is a turbocharged mill that churns out 122bhp of power and is the same engine that also propels the B-Class. We were happy with the manner this engine that performed on the B-Class. With the reduction in weight of the body, the engine is a decent performer and has a strong mid-range from 3500rpm. It comes mated to a 7-speed transmission, which improves the torque spread. Being a dual-clutch, the shifts are more responsive. The diesel engine is the 1.8-litre that will churn about 109bhp and will also come mated to a 7-speed dual clutch transmission. We haven’t got our hands on this engine, but we shall drive it in India and share our comments.

The ride of the A-Class is as good as any other Mercedes-Benz. We drove it on smooth roads in Germany, and possibly we cannot say how would it fair on our bad roads. However, the little bit driving we did on rough roads hinted on a good ride quality, as the suspension is a tad soft for better ride.

The handling of the A-Class is decent too. Push it around a bend and you get a feel that the body is rolling. However, it does hold on.

This does take a while to get used to.  It is joy to drive the A-Class on winding roads. The light steering wheel is easy to drive in city and manoeuvre in traffic, however it doesn’t weigh up much as the vehicle gathers speed.

The A-Class is definitely an attractive vehicle and we love its exterior and interior styling. The engines are decently powered and even space and driving dynamics are good.

Now, the biggest challenge that the Stuttgart-based manufacturer faces is the pricing, as it needs to have the bells and whistles of a luxury car. The launch is on the 30th of May. We will have to wait until then. We predict the pricing to be between Rs 22-26 lakhs.