Published On Dec 21, 2013 By Rahul for Mahindra Verito Vibe 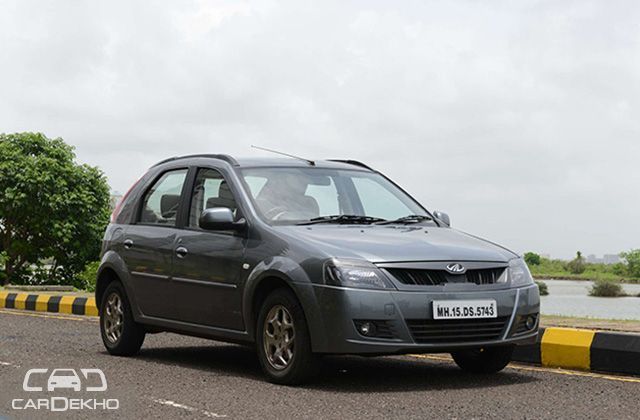 We love diesel hatchbacks, because they are compact and fuel-efficient too. The Renault 1.5-litre K9K engine has been our favourite as it is fuel-efficient and even shows no sign of struggle at lower rpms. We have always loved the Logan as it is a no non-sense car and we were happy to get the Verito Vibe as a new long-termer.

We share our reliability report of the Verito Vibe, this was our new replacement for the Mercedes-Benz C-Class and the most happy moment was the reduction in fuel bills. Does the Verito make us happy? We will find out in the coming three months.

The Verito Vibe is the Verito without a boot. It has the same 1.5-litre K9K Renault engine that churns about 64bhp of power. This is a fantastic engine as it doesn’t have much of turbo lag despite and doesn’t feel underpowered at point of time. The 64bhp on paper might not sound sufficient, but the engine’s well spread out torque ensures good power delivery. The NVH levels of this engine aren’t much, however you can’t expect amazing insulation especially when you see the price tag. It is loud at low engine rpms, but it settles in as the engine warms up.

The Verito Vibe can pull cleanly even when lugged into a higher gear. One can easily potter around in city or the highway. The engine is freely revving and most of the times, you do not need to downshift if you need overtake. The throttle response is good and the engine has a strong mid-range. The higher rev-band is where there isn’t much of power produced. The Verito Vibe is light than the Verito as it doesn’t have a boot, so the performance is wee bit better. The transmission on the Verito Vibe is also the same as the Verito. It gets the same gear knob, as you will see in a Duster too. The gearbox is slick and even the throws are positive, though not very short. The clutch too is light and easy to shift. We like easy it is to drive this car and so convenient for city or highway driving.

The interiors of the Verito Vibe are the same as the Verito. It has spacious front and rear row. The front row seats are wide and are comfortable, though some extra thigh support couldn’t have done any harm. The second row too is spacious as it has a large seat that is wide enough for three people to sit abreast without any kind of squeezing. There is enough headroom and kneeroom, however the thigh support again is a bit less if you are a tall person.

The Logan was built to seat five people in comfort and that is what exactly it is doing as the Verito Vibe too. Space is the biggest USP of the Verito Vibe. The boot of the Verito Vibe is 330 litres, however the access to it is poor. It doesn’t open like a hatch and hence it is difficult to put heavy luggage inside.

The Verito Vibe has decent quality interiors, however the fit and finish is good. The feel of the materials could have been better but it is just fine. The Verito Vibe has a fixed steering and it doesn’t be adjusted and even the equipment level is anything exciting. It has an audio system with USB and aux, but it doesn’t have steering mounted audio controls and other features like Bluetooth connectivity.

The interior styling too is basic as well. But the Verito Vibe is good for its space and comfort and this is what it does well. The Verito Vibe is possibly one of the few hatchbacks that can sit five people in great comfort.

Small cars are always loved as city communters. The Verito Vibe from Mahindra is a great compact car for the city as well as some long distance commutes such as Mumbai to Pune or Mumbai to Ratnagiri.

The Renault K9K 1.5L turbodiesel engine is a never say die one that chugs along no matter what. The best part of this engine is that even though it puts out only 64 horsepower, it never feels underpowered at all. The Vibe can reach speeds of 140km/h and maintain that speed for a long time, yes there are down sides to that, the fuel mileage does go for a toss, as the rpm’s are pretty high, aprrox 2700rpm at those speeds.

Nonetheless, on our way to Pune once, we maintained a speed somewhere between 70-80km/h on the expressway and we ended up with a mileage of 22.3 km/l.

We were really in awe on the way back from Pune. As a disclaimer I will say there is a lot of downhill driving on the return journey from Pune to Mumbai, which does allow for quite a bit of coasting but apart from all that, the Vibe delivered tremendously well. The fuel mileage clocked on the on-board display showed 35.9km/l as we coasted passed the food hall and McDonald’s on the left hand side near the Khalapur toll.

To help out with the ease of driving the Vibe has an extremely light clutch pedal. So that means pressing in the clutch is no problem at all and the biting point is broad. The torque produced by this engine allows you to drive around in the city of Mumbai in deadbeat traffic without even touching the throttle.

We love having the vibe as part of our fleet. It may not be a super looker but it one hell of an awesome performer.

As you must have read from our previous reports, we enjoy driving the vibe around the city as well as on the highways. We ended up taking the vibe to many places since it is such a fuel-efficient car.

The space provided by the Verito Vibe is adequate as well. Though the trunk is slightly hard to access and put heavy bags into, it does have enough space and capacity to hold those bags.

The rear legroom is plenty but we felt that the seats could have been slightly more comfortable. The seats in the front feel like old people sofas and are not too comfortable for long distance rides. The plastic quality on the inside is decent and is does rattle when one travels over potholes or speed bumps, but for a budget everyday commuter the vibe is great.

One issue that we would like to address is that of the suspension. Maybe it was the car we had, but the amount of body roll on the vibe is tremendous. On the ghats on our journeys, corners had to be taken as speeds slower than the speed limit otherwise the passengers were being thrown around in the cabin. It wallows a lot on the corners and the twisty parts and that is not a good thing for people who have motion sickness.

All in tall the space and the fuel economy make up for all the other drawbacks in this car. The build quality, the handling and the nvh levels seem like a non-issue when it comes to the amount of money saved on fuel by driving the Vibe around. In the city we were getting mileage readings from 18.6km/l to 20km/l, which is astonishing. These readings were achieved by making a conscious effort to get good fuel mileage so the shifts were always right and we never exceeded 80km/h.

To top it all off, the A/C in the Vibe is magical. Cooling is immediate and there even on the lowest setting the air is enough to make you feel pleasant inside. The sound system is decent enough to enjoy good music on long drives.

As an everyday commuter in our garage the Vibe has served us well. We have used it the most and now that it has done more than 11,000kms it is time for us to send it back to the factory for a good service.