Indian car buyers have their fair share of prejudices. Not too long ago, if you told someone to buy a diesel car, they’d probably say no because diesel engines were thought to be heavy on maintenance. However, with it proving to be the more efficient and affordable fuel, that has changed. Then again, few would buy a car with an automatic transmission because everyone thought they're not only more expensive, but thirstier as well. Increasing congestion changed that and with more people choosing two-pedal cars, you have torque-converters, DSGs, CVTs and AMTs. The number of options is OMG!

One prejudice that hasn't gone though, is the one against electric cars. Mahindra is one Indian car manufacturer that’s been trying to make electric vehicles more approachable and now, it's brought us the 4-door e2oPlus, adding a scoop of practicality to Mahindra's flagship zero-emissions car. So is this the one to kill a prejudice and bring the e2o name back to life? 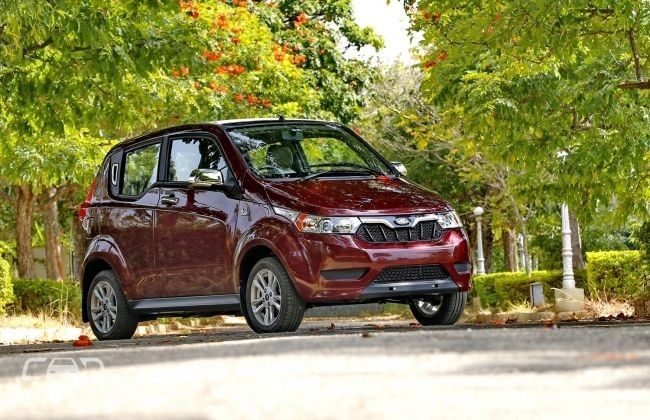 Now, unlike what you may have believed, this isn’t the typical Mahindra jugaad. They haven’t just crammed in two rear doors on the e2o, and it actually looks better proportioned. Every dimension has grown and importantly, the wheelbase has expanded by a whopping 300mm! The 170mm ground clearance is a small reduction, but adequate nonetheless. In terms of design, it’s very quirky and while some people will like it (myself included) others will find it strange.

The silhouette looks like it was borrowed from the WagonR Stingray, while the sweptback headlamps are a carry-over from the e2o. There’s a lot of family inspiration too. The front grille is from the Scorpio; the wheel arch bulges are XUV500-like; while the rear door handles are mounted near the C-pillar – just like the KUV100. Quirky touches like the odd window line kink remain, but unlike the 2-door, the rear end doesn’t look swollen. Thanks to the conventionally-styled rear bumper and proper rear hatch, the e20Plus looks, for all intents and purposes, like a regular car. That’s important when you’re trying to get people familiar with the almost alien concept of electric vehicles in India.

It’s not exactly the same affair when you get into the car though. Yes, getting into it feels no different than stepping into a regular hatchback, but once in the driver’s seat, the experience is new. The instrument cluster looks like it was taken from a video game and the blue backlighting looks uber-cool. You can view data like the range, charge left in the battery and drive mode chosen, along with a digital speedometer and uniquely styled rev-counter.

Space is surprisingly good, but you do wish the seats had thicker and softer cushioning. This is a tall-boy hatchback so headroom is decent, but since the battery pack is placed below the front seats, taller folks (read: 6ft+) will find their hair brushing the roof. Rear seat space is equally good and as someone who is 6.5ft tall, I was able to sit behind my own driving position, albeit snugly. However, I must point out that entering the rear seat will be difficult for senior citizens, because the wheel arch eats into the entry space.

You also get a touchscreen infotainment system by Blaupunkt, not to mention, the mobile phone app through which you can monitor the battery status, lock/unlock the doors or even switch on the AC from wherever you are! However, despite the gadgetry, the interior trim quality, like the exterior build quality, is strictly average and feels on par with the e2oPlus’s size rivals, not its price rivals.

Also, since the car is only 1,575mm wide, Mahindra has kept the door-pads slim to increase cabin space. The result? You can’t get anything more than a 500ml bottle in each door and yes, even Mahindra says this seats 4, not 5.

Boot space, however, is quite good. At 135 litres, it’s more than what the Tata Nano offers and the boot floor is flat, so the space is usable for a few duffel bags. This is a city hatchback so don’t expect it to support your family’s luggage for a weekend getaway.

What you can expect though, is adequate performance to keep you entertained. Electric cars may have been born out of the need to make travel ‘greener’, but that doesn’t mean boring. Why? Unlike petrol or diesel cars, you don’t have to work your way through multiple gears to access the motor’s potential.

All the performance is delivered in seconds. No gears = almost no transmission loss, and since the e2oPlus weighs less than 1 ton, it’s nice and zippy to drive. The top-end variant’s electric motor makes 30kW (around 41PS) of power and 91Nm of torque. That doesn’t sound like much, but as mentioned before there’s no working through gears or even waiting for a turbocharger to kick in to use what it has to offer. As a result, city driving is a breeze and with its compact size, it’s like a toy filtering through traffic. It’s quick off the line too, with a claimed 0-60kmph time of 9.5 seconds and the top speed is limited to 85kmph.

Regular city driving is easily managed in ‘F’ (forward) mode and if you’re feeling impatient, just knock the gear lever down a click into ‘B’ for boost mode. As the name suggests, it bumps up the throttle response and the e2oPlus darts forward like a 3-month-old puppy, putting a mischievous little grin on your face. All said and done though, it’s very easy to adapt too. For reference, this was the first time I ever drove an electric car in my life. The traditional engine rumble is replaced with the electric motor’s mild whirring, and the only other noise present comes from the tyres or the AC. It feels strange at first, but you get used to it.

That said, the ride is noticeably stiff and even minor undulations are felt easily. The suspension is noisy over broken patches and feels particularly bumpy at the rear. The steering is super-light, but feels numb and offers no feedback. Braking isn’t too strong either and since the 14-inch wheels are wrapped in low-rolling resistance tyres that offer limited grip, the overall handling package is expectedly weak. However, it is easy and nimble to drive in the city and at the end of the day, that’s what it’s been designed for.

Here’s the most important bit – Mahindra claims the e2oPlus can travel 140km on a full charge! Slap that down to even 100km in real world conditions and it’s still usable for daily office runs or short range city trips. It needs about 9 hours to charge all the way through a regular 15-amp plug point or 90 minutes with the fast-charging option, so you can charge up at work or overnight at home.

So is the e2oPlus a great city car? Yes! Can it be a family car? Yes! Can you use it for your daily office runs? Yes! Does it kill the prejudice against electric cars?

Well, no, but it has improved on the e2o and brings a dose of practicality into the mix. At a price of Rs 5.46-8.46 lakh (ex-showroom, Delhi), it falls into the same space as popular premium hatchbacks or compact sedans, so realistically, it will be the 2nd or 3rd car in the family. However, for the niche audience that the e2o appeals to, the added practicality is definitely a boon and can potentially turn a ‘maybe’ into a ‘yes’.

Face it, electric cars are the future and cars like the e2oPlus make people warm up to that thought. So what if it doesn’t kill the prejudice? It’s a big step in the process and it's a strong attempt by Mahindra to bring electric cars to the masses.