Published On Oct 23, 2015 By Akshit for Fiat Abarth Punto

Fiat was the carmaker that gave India the very first taste of a hot hatch with its iconic Palio 1.6 GTX. Now post a decade and a half, the same carmaker has decided to take the hot-hatch legacy forward and satiate the hunger of the country’s car enthusiasts with its performance-oriented brand Abarth. 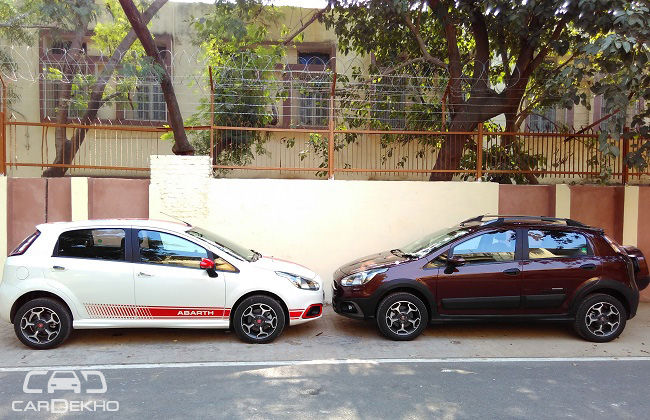 While the 595 Competizione - the first Abarth that made its way to India, is an expensive affair and out of reach for most of us, the Abarth Punto and Abarth-powered-Avventura comes as a delight for the auto enthusiasts those have been starving for a proper yet affordable manual hatchback. We got our hands on the newest Abarths in town, although for a very, very limited time. Let’s find out how hot they really are...

First things first, the Punto has undergone a proper Abarth treatment, whereas the performance-oriented derivative of Avventura is essentially the same car with an Abarth engine on-board. So, the go-fast-intentioned tweaks that the Punto gets – is somewhat missing on the crossover, which certainly acts as a spoilsport on the road.

In terms of looks as well, the Punto comes with a distinctive paintjob tastefully garnished with red decals and scorpion badging, while the Avventura just gets the Abarth-stamped 16-inchers and ‘Abarth-powered-Avventura’ monikers on the rear doors. Its rest of the story remains same as the standard sibling, including the Fiat badges.

The duo gets the same 1.4-litre turbocharged petrol engine from the Linea T-Jet but, here again, Fiat acted a bit biased owing to which the unit on the Abarth Punto puts out 5bhp and 2Nm more than the Abarth-powered-Avventura. Rated at 145bhp@5,500rpm and 212Nm@2,000-4,000rpm in the Punto, the well-endowed mill comes mated to a standard 5-speed manual gearbox in both the setups, transferring power to the front wheels. Thankfully, the engine tuning has been kept same and feels equally powerful in the two.

Until the needle touches the 2000rpm, there is an evident turbo-lag in place, but once past that, the motor turns into a different animal altogether. You are open to an addictive driving experience involving a lot of red-lining and quick-shifting, which reminded me of the Palio at many instances. Fiat claims a 0 to 100 kmph timing of a shade less than 10 seconds for the Avventura and 8.8 seconds for the Punto, which I felt are quite achievable. Although we will report accurate test figures as soon as soon as we get the cars for an extensive test.

The long-throw gearbox and absence of those right noises coming from the exhaust are some of the few grudges I have from these Abarths.

As mentioned before, the Avventura comes with an identical suspension setup as the stock unit. Now this is where actual problem lies. While going hard on the pedal, the insane torque steer welcomes you in a rather scary way. And while going fast around the corners things get worse with an evident body roll due to 200+ mm ground clearance. The Abarth Punto, on the other hand, runs on mildly stiffer springs than the standard counterpart, in a bid to balance the additional power on offer. Even in the Punto, a fair bit of torque steer can be felt but none of it is very unnerving. Also, the ride height has been lowered by 30 mm, bringing the ground clearance down to 155 mm, aiding to the cornering fun.

Punto’s steering is still its best part. It remains a hydraulic power-assisted unit that’s accurate, full of feel and damn quick off the straight ahead position. However, Avventura’s steering feels a bit light on the move as compared to Punto, though it isn’t worth complaining about.

The 16-inch rubber (195/55 R16) on the duo feels quite grippy and disc brakes all around is confidence-inspiring and provides tremendous braking power.

Hot hatch is often a loosely used term in India. Any hatch that’s good-looking and has decent performance figures is being categorized as a hot hatch. But this new Punto isn’t one of the regular joes. This is a genuinely fun-to-drive car and looks absolutely gorgeous with those scorpions spread all around. Its powerplant is a gem and the overall setup is commendable. On the other hand, Avventura in this guise seems unfit and feels like a half-hearted attempt from Fiat to change its fortunes.