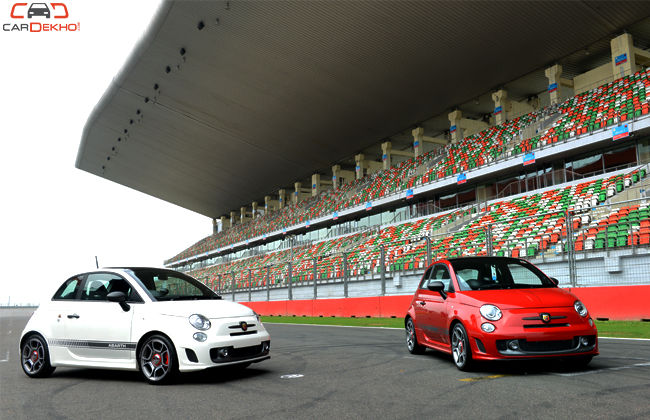 For starters, Abarth is to Fiat what AMG is to Mercedes-Benz and M division is to BMW. The in-house tuner is a wholly-owned-but-semi-autonomous unit inside the FCA(Fiat Chrysler Automobiles) and has been making the fastest Fiats from more than five decades now. The Italian performance-oriented brand, after much contemplation, has finally entered the Indian market and the first product from its stable is one of the most potent, race-ready versions of the Fiat 500 till date, the Abarth 595 Competizione.

We recently got a chance to take this pocket dynamite for a short spin at the Buddh International Circuit and this is what we think about it.

Retaining the vivacious look of the Fiat 500, Abarth has injected some bad-boy swagger into the 595 Competizione, making it a true headturner. Those renegade scorpion badges all around look brilliant and up the ante for its racy appeal.

The sporty bumper with large air dams and a blitz of lights comprising of the large circular head lamps sandwiched between the bonnet and the bumper, circular lamps placed below them and the tiny fog lamps, dominates the scene at sassy looking front.

The side profile, on the other hand, looks very neat and compact, wearing those gorgeous 17-inch alloys wrapped in 205/40 Pirelli P Zero Neros, enterprising body skirting and Abarth decals. While the triangular appearance at the rear end, having that oversized bumper on-board, seems a bid weird if seen alone, though it blends well with the overall design.

The sporting intent is carried forward to the inside too. The driver-focused dash layout is simple and most of its bits are all-black. The plastics are relatively hard and use of leather, chrome or any other fancy material is minimal. The machined alloy pedals and chunky flat-bottomed steering wheel, along with the well-contoured Sabelt race seats very much justifies the sporty character of this car. The gauge-in-gauge digital speedometer and tachometer, just like the standard Fiat 500, falls well in place, and a big turbo boost gauge is an element that I liked the most.

The automatic climatic control system in the Fiat 500 has been ditched in the 595 and it comes equipped with a manual system. The infotainment system looks a little outdated with no large LCD display that we see in most of the modern cars today, though it offers connectivity options like USB, AUX and Bluetooth.

Surprisingly, there’s a good amount of room for the occupants seated up front, but the rear bench is best suited for kids, as an average sized adult would find it challenging to even enter that space.

The 595 Competizione packs a 1.4-litre, 16-valve DOHC four-pot, turbocharged petrol engine that already powers the T-Jet trim of Fiat India’s mid-size sedan, the Linea. However, in the 595, the unit has been uprated drastically to deliver far more output of 160 bhp at 5,500 rpm and a peak torque of 230 Nm at 3,000 rpm in the sport mode.

The powerplant is coupled with an automated manual transmission (AMT) that is based on the five-speed manual gearbox available internationally. Instead of a conventional shift lever, the 595 gets four buttons on the console space for the lever. The N button stands for Neutral, R for Reverse, 1 for normal Drive mode and A/M is for engaging the manual mode. While going in the manual mode, where you actually should be for most of the time driving this car, the paddle shifters behind the steering wheel comes into play and performs decently.

The engine has some serious turbo lag under the 3,000 rpm mark, though rushes towards the 6,500 rpm limiter quite eagerly post that. In the Auto mode, the gearbox seriously disappoints and shifts up really early, while the manual mode with the paddle shifters on duty, the scenario improves but again there’s a nervous pause while swapping cogs.

In those few laps I spent behind the wheel, what I could easily feel, was a good engine trying its level best coping-up the lagging support from that disappointing AMT gearbox. The five-speed manual, on which this gearbox is based on, would have multiplied the fun and rush this car currently offers with this notchy unit.

The ride of the 595 Competizione is exactly what I expected from a hot hatch like this. The suspension setup is quite stiff featuring Copaf suspension components at the front and Koni dual valve shock absorbers at the rear with selective dampening.

The straight line stability is commendable and so is the cornering ability. Throw some curves and bends and the 595 darts in and out of them with minimal body roll. The torque transfer control technology comes as a boon in disguise and moderates the output between the front wheen at bends in a bid to ensure optimum power is sent to each wheel while cornering. The EPS(electronic power steering) unit is not what you would have expected in a car like this, but it’s not bad either and feels quite direct. Overall, the 595 is one of the most composed track performers I’ve driven till date.

The Abarth 595 Competizione is an opportunity missed. It’s undoubtedly an exciting driver’s car that tries hard to satisfy the hunger of pure driving enthusiasts but somehow lacks, despite of having a good engine and great handling, all thanks to the disappointing AMT gearbox. Considering the market circumstances, the need of an autobox was mandatory, but that could have been managed with a more precise transmission.