Honda’s WR-V promises to be the better all-rounder amongst the rugged hatches. Does it offer a more convincing alternative to Hyundai’s popular i20 Active? 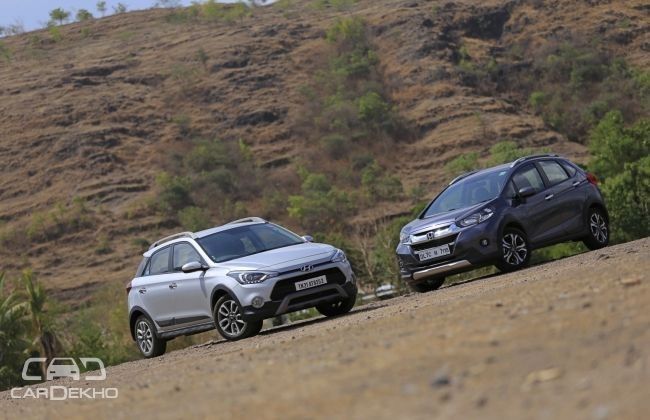 The hands down winner in the sub-Rs 10 lakh compact-SUV/crossover segment is the Maruti Suzuki Vitara Brezza. But what if you were looking for a beefed up hatchback than an SUV-like crossover? Your choices would include cars such as the segment starter Volkswagen Cross Polo, Toyota Etios Cross, Hyundai i20 Active and the fashionably late Honda WR-V.

The Hyundai i20 Active was launched here in March 2015 while the Honda WR-V has been on the market for around four months, as of publishing this review. Customers in this segment are looking for a hatchback that is comfortable covering long distances in the city, have an edge over rough roads and are capable of tackling weekend duties with the family. We tested the diesel variants to see which offered the better package overall.

The basic formula followed by both Honda and is Hyundai is the same - take a hatchback, add some visual muscle to it, make some mechanical changes (maybe) and price it at a premium. But the approach taken by these companies are completely different; At a glance, it is easy to see that Honda went back to the drawing board to make the WR-V look different than the Jazz, meanwhile, Hyundai took the easier route - the i20 Active looks a lot like the Elite i20.

Look at them side-to-side and the WR-V's fresher, more butch design catches your eye. When looked at from the front, the WR-V is more aggressive - with elements like the large headlamps, LED DRLs and sculpted bonnet. Does the design hide the fact that this is essentially a hatchback? No. But it does that better than the i20 Active.

The butch-ness of the WR-V is limited to the front though, the side-profile is exactly like the Jazz - save for the lower black cladding, increased ground clearance and the roof-rails. Move to the back and it is a hit-or-miss design, it has an unfinished look about it. Where the Hyundai i20 Active fares better is in the fact that it has consistent look about it; it doesn't feel particularly special from any angle - but it won’t put people off either.

Honda has been able to make the WR-V look bigger than it is because of the aggressive design - especially because how much taller (46mm taller in case you were wondering) it is than the Active i20.

Look at the absolute numbers and the WR-V is 4mm longer and 46mm taller but falls short in terms of width by 26mm and wheelbase by 15mm. Interestingly, the WR-V, has had some significant mechanical updates over its hatch sibling. The wheelbase is longer than the Jazz This should mean that the i20 Active has a clear advantage in terms of interior space.

Both the Honda WR-V and Hyundai Active i20 get keyless entry-and-go. Approach the driver-side doors of both the cars, use the handle-mounted-sensor to unlock the car and the Hyundai seems more appealing; The ORVMs fold out automatically and the door feels well weighted. The WR-V, on the other hand, won't open! You have to slide your thumb over the sensor to unlock it, pressing the sensor locks the car.

Step into the WR-V and the sense of space is overwhelming as compared to the i20 Active. The larger windows with a lower window line, a sunroof, quarter glass panels at the front and rear let a lot of light into the cabin. This combines with the taller roof make the WR-V feel larger on the inside than the i20 Active.

Though the i20 Active feels less spacious at first, it feels more comfortable than the WR-V. The seats have better bolstering, the seat bases provide better under-thigh support and they are more comfortable on longer drives even though they are not as soft as the ones on the WR-V.

When you pile in five adults in the car, you realise how that 'feeling' of spaciousness in the WR-V doesn’t quite live up to expectations. The wider cabin allows three people to sit abreast more comfortably in the i20 Active, the relaxed seatback angle and better under thigh support takes care of  back seat passengers’ needs better. The short seatbacks in the WR-V coupled to the stubby, non-adjustable headrests make the rear seats of the car especially uncomfortable for taller passengers.

The WR-V may not seat five people in absolute comfort, but it will certainly accommodate 4 tall passengers with ease and comfort for jaunts around the city. They will also be able to stuff their luggage in the cavernous luggage compartment. At 363-litres, the WR-V's boot is much larger than the 285-litre boot of the i20 Active. On the flip side, you can split (60:40) and fold the rear seats of the Active to manage non-uniform pieces of luggage more easily. The WR-V's rear seat folds forward in one piece; Honda should have given it the Jazz's fantastic 'magic seat' for unparalleled practicality.

The differences become apparent when you check these features out on both cars, though. The Active i20 test unit we drove did not have the touchscreen infotainment system in it, but we know from experience (Grand i10 facelift and Xcent facelift) that Hyundai’s Android Auto and Apple CarPlay compatible unit is responsive and easy to use. Honda's Digipad system gets MirrorLink smartphone integration only; while this lacks the simplicity of AA or CP what lets the system down is that the low graphic quality and its laggy and buggy nature. The unit on our test car struggled to take calls via Bluetooth.

The touchscreen-based climate control system on the WR-V may look fancy at first but it is not easy to use on the move as it requires you to take your eyes off the road to adjust it. The system is also not as effective at cooling the large glasshouse of the WR-V in hotter conditions. The i20 Active's system, with its traditional but more intuitive controls, is more powerful too.

The WR-V does have two features that set it apart from the i20 Active - a sunroof and cruise control. The sunroof, whose cloth cover can be opened separately from the glass panel, plays a big part in making the WR-V's cabin feel bigger as it lets more light. The cruise control system makes long drives on multi-lane highways much less stressful but is limited to the diesel variant only. The Hyundai counteracts by providing a total of six airbags, the WR-V has only two.

The Honda WR-V is powered by Honda's staple diesel motor for the Indian market, a 1.5-litre, 4-cylinder, turbocharged 'EarthDreams' unit which has been tuned to develop 100PS of maximum power and 200Nm of peak torque. The engine powers the front wheels through a 6-speed manual transmission.

The Hyundai i20 Active is powered by a slightly smaller 1.4-litre, 4-cylinder, turbocharged unit which develops similar power and torque figures as the Honda - 90PS and 220Nm, respectively. This is is front-wheel-driven with power sent through a 6-speed manual transmission.

Switch on both the cars and it is immediately noticeable that the i20 Active is quieter, inside-out. The WR-V's cabin lets in less noise from the diesel motor as compared to other Honda cars like the Amaze, but it pales in comparison to the quietness inside the i20 Active.

On the move, you find that both cars are at ease in the city. The diesel motors in both these cars have enough torque developed lower down the rev range to help you potter around town without using too much of the clutch and transmission. The i20 Active has a slight advantage if you are the kind of person who likes plugging the gaps in traffic - the slight torque advantage helps the car gather pace faster than the WR-V. The WR-V, on the other hand, will reward those looking for a smoother drive in the city as the clutch is lighter and the power delivery is linear. The transmission though is clunky in comparison, which is surprising for a Honda.

At highway speeds, the i20 Active's gearing is designed to exploit the torque band (1500rpm-2750rpm). At 80kmph, the engine is ticking around the 2,000rpm mark, a slight push of the throttle is enough to get it going. While the Honda engine is also in its element at these speeds, it takes longer to gather speed - which maybe because of the taller gearing. What is abundantly clear is that the Honda is not the car to be in if you wanted a quiet drive.

Unless you drive aggressively all the time, the WR-V is the better city-slicker in this comparison. It has a smoother power and torque delivery, the clutch is lighter, the suspension handles road imperfections better and you have a better view outside thanks to its expansive glass area. That is not to say that the i20 Active is bad in the city, but the stiffer ride, heavier clutch, and lower all-round visibility makes driving in the city a little bit more cumbersome. Both the cars deal with most road surfaces without any drama, but the WR-V feels more comfortable to be in. The i20 Active's steering is not as light in the city (or at parking speeds) as the WR-V's, making you work harder to manoeuvre it.

Find an open highway and the tables turn quite dramatically. The Hyundai's suspension proves to be better balanced as it transforms the Active into a very stable car, the weighted steering adds more confidence and the engine has more than enough grunt to make you want to go faster. Honda's softer suspension and higher ride height nudges you to keep speeds under 80kmph; couple that with the very light and disconnected steering and you have a driving experience that doesn’t quite let you relax at the wheel. Rear seat passengers, will find that the soft suspension and the soft seat cushions lead to amplified roads bumps. The addition of cruise control seems almost unnecessary in the WR-V; unless you find the smoothest piece of long straight road or you prefer driving under 80kmph, you are not going to use it.

The Honda WR-V is not a bad car. It has the freshest face in its segment, feels more spacious, drives well in the city and has an economical engine too. If you’re going to spend most of your time in the city with only occasional trips out of town then the WR-V could fit the bill. But if you are looking for an all-rounder, the i20 Active is a better bet. Better build quality, refined engine and highway manners make it the winner of this comparison.