Published On Oct 10, 2012 By Ritesh for Chevrolet Sail Hatchback

General Motors had introduced the Chevrolet Aveo U-VA here in India in the year 2006. The Aveo U-VA was the first large hatch from Chevrolet for the Indian market and came with only 1.2-liter petrol engine option. The Chevrolet Aveo U-VA was spawned on the GM-Daewoo T200 platform however the hatch did not set the sales charts on fire as the American major was expecting. The Indian automobile market was not ready for larger hatchbacks, lackadaisical design and poor performance with missing diesel option were a few reason that dampened Aveo sales. Also hatchback segment was absorbed by smaller hatch’s like Maruti Swift, Hyundai i10 which looked more appropriate and suited the mindset. 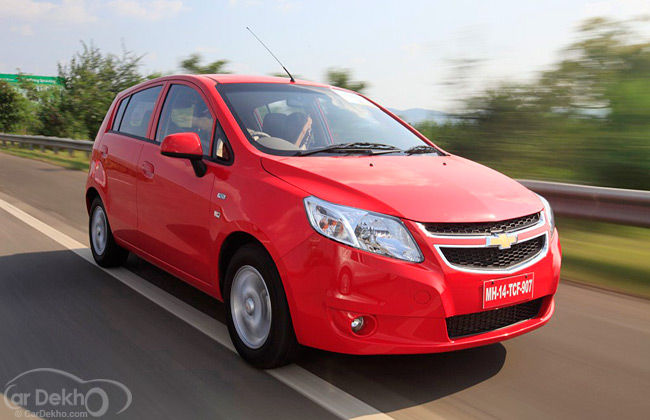 We were one of the blessed few who test drove the upcoming Chevrolet U-VA Sail across the Pune Expressway and up to the twisty roads on the hills of Aambey Valley to bring you this exclusive road test of one of the most anticipated cars from General Motors in recent times.

The Chevrolet Sail U-VA hatchback was designed and developed by the Pan Asia Technical Automotive Centre (PATAC) which is jointly managed by General Motors and SAIC (Shanghai Automotive Industry Corporation).

Chevrolet Sail entered the Chinese shores in January 2010 and became an instant hit by clocking in a consistent 25,000 units per month. Exports to Latin America started in 2011 and currently the Chevrolet Sail U-VA enjoys the distinction of being the bestselling export market car from China.

The Chevrolet Sail U-VA has an overall length of 3946mm, while it stands at 1503mm in height and is 1690mm wide. The dimensions of the Chevrolet Sail U-VA make it one of the biggest large hatchbacks in the segment, way larger than the Maruti Swift, Ford Figo, Maruti Ritz and the Toyota Etios Liva.

The headlamps are in the swept back angular design styling that are flushed in the bodyline and are enormous in terms of size. The front bumper gets a soft sweep design along with the centre air dam with the honey comb mesh grill in black.

A set of round fog lamps are mounted on the front bumper that come on the top end Chevrolet Sail U-VA LT variant that we drove during our test run. The side profile of the Chevrolet Sail U-VA can be easily discerned with the backward sloping roofline and the flat rear end.

The Chevrolet Sail U-VA also gets a small front quarter glass on the A Pillar and a rear quarter glass on the C Pillar, a larger glass area means more light entering the cabin and bigger looking car. The wing mirrors are in body colour with the lower half being black. You have a centre mounted radio antenna on the roofline. The outside door handles are in body colour and have lift type styling, we would have preferred the grab type styling on them though.

You have the Chevrolet Bow-Tie logo in XL size on the centre of the rear tail gate. The rear bumper extends itself up till the tail lamps; the air sweep designing is also seen on the rear bumpers along with a pair of angular reflectors mounted on the extreme lower sides of the bumper. The tail lid gets the Chevrolet Sail U-VA LT insignia in chrome along with the TCDI lettering confirming that this is the diesel version.

Chevrolet Sail U-VA has one of the best aerodynamics, a feature that leads to the lowest drag coefficients in its segment resulting in enhanced fuel efficiency.

The interior of the Chevrolet Sail U-VA are adorned with beige colour theme that adds more depth to the already large cabin area. The dashboard uses beige shades and the quality of the plastics can be felt outright. The instrument cluster gets the amber backlight glow and consists of a smart looking digital RPM meter on the left, a large semi-circular speedo in the middle calibrated to 200kmph and the tell-tale warning light cluster on the right side along with a single trip and odometer.

The tri-pod design of the cluster has a neat looking silver lining around the dials while the speedo gets a soft amber glow effect in the middle with a red needle that indicates the speed. The steering on the Chevrolet Sail U-VA comes with a 2-spoke design along with individual horn buttons on either side.

The leather wrapped steering feels good to grip but the horn buttons are a bit difficult to get used to as you need to use your thumb each time you need to honk the horn making it an ardous task especially while turning. There are two cubby storage areas on the right side of the steering wheel on the dash. The centre console gets an all silver fascia shade.

A single-DIN CD-MP3 player with AUX, USB port and Bluetooth audio playback connectivity does a good job duty in here. A small storage space can be made good use of just under the MP3 players head unit. The single zone manual AC unit with round dials works well to cool down the largish cabin of the Chevrolet Sail U-VA. The centre console has a large deep storage space upfront. The manual gear shifter has a somewhat angular design on it; the stalk is good to grip.

The power window buttons are placed on the centre console just ahead of the gear shifter and behind the deep storage box, this needs some time to get used to but we were given a logical reason for this by GM officials. According to them, the placement is done because if the power window buttons are placed on the door pads they are prone to getting spoilt more often by rain when the doors are opened. The door pads get a mix of dark and light shade of brown-beige mix. Bottle holders are provided on the door pads along with arm rests and silver-chrome inside door openers.

The rear door pads do not get bottle holders on their door pads. The seats get the dark and light brown fabric upholstery. The driver’s seat does not get height adjust but a height adjust feature is provided for in the steering so the void is not felt. The front seats offer good support and are wide and tall enough to seat six-footers comfortably. Visibility from the driver’s seat is good. General Motors engineers have uniquely shifted the fuel tank which is usually placed under the rear seat to the bottom of the front seat.

The shifting of the petrol tank ahead on the Chevrolet Sail U-VA also helps in giving it a large standard boot capacity of 248-liters while this can be further extended by folding down the 40-60 split seats to 1215-liters. The tail gate opens wide giving a nice low loading space to the boot.

The Chevrolet Sail U-VA will be available with a 4-cylinder 1.2-liter Smartech BDOHC Petrol engine that gives out 85bhp @ 6000rpm along with 113Nm of peak torque. The Diesel version of the Chevrolet Sail U-VA that we drove comes powered by the new 4-cylinder Smartech 1.3-liter SDE (Small Diesel Engine) power plant that produces 77bhp @ 4000rpm and belts out 205Nm of peak torque at as low as 1750rpm.

As we drove the Diesel Chevrolet Sail U-VA for the test drive we will mostly speak about that. Crank start the engine and the 1248cc SDE diesel engine settles down with a very smooth idle. General Motor engineers have done a great job of insulating the cabin area; the Chevrolet Sail U-VA has superb NVH levels. The cabin is super silent and this is easily the car with the best NVH levels in the segment. This is an all-new engine and a well-made one at that. The 1.3-litre 4-cylinder SDE engine is the elder brother of the 1-liter 3-cylinder diesel engine that powers the Chevrolet Beat Diesel. The 1.3-litre SDE engine has a very relaxed drive feel to it. The first two gear ratios are spaced out more for city traffic driving while the third, fourth and the fifth gears give you a lot of power.

The Chevrolet Sail U-VA has excellent mid-range power delivery ability; you can pull away from the traffic rather quickly once you are in the sweet spot of this power band. The engine is so well balanced out that we could do an inline climb in the 4th gear at speeds as low as 25kmph without any knocking on the engine. The steering feedback is neither on the heavy nor on the lighter side and feels adequately weighted. Acceleration on the Chevrolet Sail U-VA Diesel is fairly quick and we touched speeds of 100kmph in about 15.4 seconds. We are also told by General Motors that this 1.3-liter SDE engine can return with fuel economy figures of 22.1kmpl ARAI certified.

We can see nothing but exciting times for General Motors and Chevrolet Sail U-VA ahead provided it’s competitively and cleverly priced.

We expect General Motors to price the Chevrolet Sail U-VA interestingly starting just under the Maruti Swift’s pricing of both the petrol and diesel versions at Rs. 4.30 lakh for the petrol and Rs. 5.50lakh for the diesel (Ex showroom).