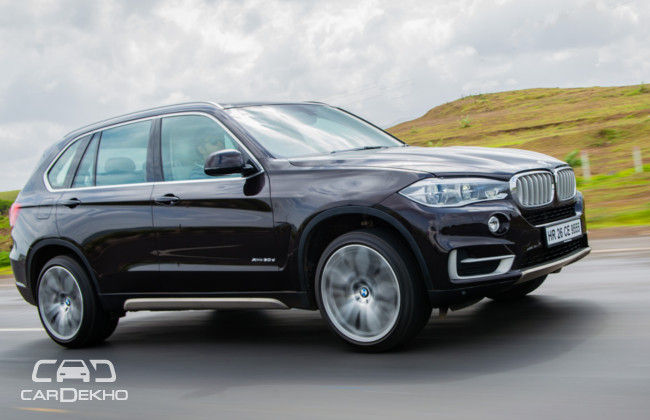 BMWs have been as the ultimate driving machine, cars that you enjoy when you get behind the wheel. However, design hasn't be one of the biggest USPs of the Bavarian automaker. They have the standard kidney bean grille design that has been evolving since the 1970s, when the first 5 Series was launched. Things have slowly changed and the new F30 3 Series has been one of the most speculator looking sedans in its segment. This same design has been carried forward on the new X5, making it look chic. We lay our hands on this new X5 and find out if it has the beans to be still called as the ultimate driving machine.

The BMW X5 does have appeal and style. The new kidney-bean grille design with the merging headlamps does make it look stylish and add more glam. Then there is the new bumper design with slats, which is the new design language for all the new generation BMW SUVs. It also gets Adaptiveeng LED headlamps and LED foglamps. The fog lamps are installed just below the headlamps, they are mounted this high, so they do not break if the front bumper scrapes during off-roading. This phenomenon can be seen on most of the off-road capable SUVs, including the Skoda Yeti.

The new generation BMWs have stylish fascias however it is the side profile that remains similar. You might not be able to spot the difference between the silhouette of the new and the old X5, unless you are one of those few from our OctaneAddict breed, or you have seen both parked together. If you can still spot the difference, then probably you have worked are working in the BMW factory. Yes, but the press demonstrator can be spotted easily, because it gets an optional set of 21-inch alloy wheels that can clearly distinguish it from its old sibling.

The rear of the new X5 is different too. It has the tail lamps, which are more of an evolution than an absolute redesign. The rear spoiler has been nicely integrated into the body and it does look a lot more contemporary.

This is where a major change has been incurred. It gets the same three-spoke steering wheel and a similar four-dial instrument cluster. However, there is the new screen, which is larger than before and has high-definition resolution for satellite navigation and more importantly reverse parking camera. The new centre console doesn't look cluttered. This is new version of the iDrive as it even has the option of split screen for multi tasking and even WiFi. The quality of the plastic is first-rate, and more importantly it is the fit and finish that has impressed us. The 3D navigation map is another gem in the BMW X5.

To begin with the seating, the BMW X5 has three rows of seating. The first row has large and comfortable seats with sufficient headroom and legroom even for tall passengers. The second row has generous headroom, however the knee-room can be a tad tight if you are a tall person. The third row of seating is clearly for the kids. There is the panoramic roof too, which does make the cabin look and feel more spacious. The boot isn't humongous when the third row of seats are upright, however there is sufficient space when these seats are folded. The split tail gate is semi-electric, as the part that goes up is electric however the other half is manual.

Straight six is the best form of engine, as it gets the ideal weight balance due to the compression or the firing of cylinders. To put it in simpler terms, a straight six cylinder has lesser NVH levels than a four, three or two cylinder engine. BMW has plonked in a 3.0-litre six-cylinder diesel engine in the X5 that produces 258bhp and 560Nm of peak torque.

The new aluminium body construction has made the X5 lighter than before, and this much power is sufficient for the X5. It sends the power to the rear-wheels through an eight-speed transmission. This is the xDrive30d, which means an all-wheel drive system that function on slip. There is no need for more power than this, there is a xDrive50d that is available in other developed markets, but this much power is sufficient for the X5. The eight-speed transmission isn't very sluggish, but isn't that quick either. It is in the Sport mode that the throttle response is enhanced and the shifts are faster. BMW’s xDrive intelligent 4WD technology with variable torque split for front and rear axles; making up to 100% engine power transfer to the front or rear axles.

X5 is an SUV- which is almost 5 metres in length- yet it does have good handling. This is due to the stiff suspension set-up, which does affect the ride quality. This is one reason why the ride on the X5 is harsh, and to add to the issues the tyres on our press demonstrator shod 21-inch wheels. Now, these wheels are optional and we won't recommend these. The alloy wheels so look stunning, but then there is a major downside to this.

The handling of the X5 is as good as any BMW sedan. The steering wheel is electronic and this makes it light and easy to drive in the city. Shift to the Sport mode, and it weighs up making it a joy drive whenever you get into the racer boy mode. You also have paddle shifts to assist you, but you won't really require them as the gearbox is smart enough. If you are seated at the back, the height of the car takes a toll and you could slide around on bends. Moreover, the Launch Control Function further makes life easy in the mighty Beemer.

The BMW X5 is a good SUV to procure, it has decent features, but not as many as the competition. The third row isn't of much use. If you need an SUV that is fun to drive then it is the X5, if you are one of those who will sit behind and go out in the night then you should pick the X5. If you procure, one ensure not to get the 21-inch alloy wheels for better ride.