The 3 Series has always been a driver’s car and a great example of what the BMW brand stands for. The previous generation 3 was a bit softer and had a light steering wheel, which drifted it away from its image. This time the Munich-based engineers went back to the drawing board to design something that doesn’t just look good but also retains the pinnacle of BMW principles— on its bestselling sedan. 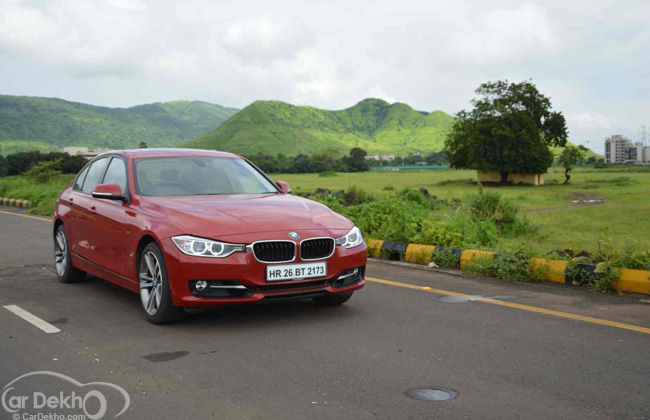 The new 3 Series (codenamed as F30) received a lot of praises from the international media. Now, it was our time to get our hands on the most powerful version of the 3— the 328i— to find out how good is it for Indian conditions. Read further for our review.

The F30’s design is leaps and bounds ahead of the previous E90. Designers have introduced a new Down the Road Graphics, where the headlamps extend up to the kidney grille. This could be the new DRG design for all the upcoming BMW models as well.

Also, the crowned hood with prominent strakes makes it look more masculine.  The F30’s design has been evolved from its predecessor and carries a similar styling. The silhouette of the new 3 Series resembles the outgoing version— with the rising swage line and a similar DLO. The rear design tinges similarity to the 5 Series.

The new 3 Series is longer and wider than its predecessor. Also the wheelbase has been increased. Despite the increase, the 3 Series is about 40kgs lighter than the outgoing model (E90).

The new BMW 3 Series comes in two trims: Luxury and Sport. The Sport has black and bright red interiors, while the Luxury gets the beige trim for the subtle ones. The interiors also get a new set of dials and revised centre console. The quality of the plastics is good at the front, with good quality fit and finish.

There is the satellite navigation system on the 3 Series— wish the screen would have gone in when the vehicle was switched off. The Heads up Display is an excellent feature to have in an entry-level luxury sedan. For some reason, we couldn’t pair our smartphone to the 3 Series; it is not that iPhone isn’t a common phone. Also, for the first time it took us a while to get copy our music from the pen drive on the iDrive and also now there are two slots for USBs— one in the glove box, while the other is in the armrest.

The seats on the 3 Series are large and supportive. There is adequate space in the front row for your head and legs. Move into the second row and you will be delighted with the space for your knees. The increase in length of the sedan makes the cabin roomier than before. However, some plastic bits at the rear weren’t up to the mark one will expect in a luxury vehicle. The boot size is also large enough to gobble your weekend baggage. The bells and whistles on the 3 Series are more than what you get on competition, like the Heads-Up Display and satellite navigation.

The 328i badge is a moniker, as BMW has ditched the straight-six engine and replaced it with the 2.0-litre turbocharged petrol engine— the 2.8-litre naturally aspirated mill has been downsized. This turbo motor produces 245bhp of power at 5000-6500rpm and also a peak torque of 350Nm.

The power delivery is fairly linear and the turbo spools in quickly at as low as 1300rpm. It is a bit too loud for a petrol engine, as the turbo’s note is a tad rough than sweet. Downshift and you can hear the roaring of the turbocharger as the blades rotate at high speed.

The alacrity of the mill makes it amusing to drive, and you won’t miss the six-pot engine unless you are an old-school person. The engine has a strong low and mid-range and the throttle response is amazing even in the Economy mode.  The Eco Pro mode makes it more efficient than the previous generation and so does the new eight-speed self-shifting transmission, which is a standard across all the BMWs. The shifts of the box are quick when you engage it in the sport mode, an ideal situation for racer boys.

Also, the engine switches off when you are waiting at a signal. This further enhances the fuel economy of the petrol and the diesel mills. BMW has made sure to also make it a mile muncher.

The 3 Series has seen an improvement in its handling characteristics. This chassis is more flexible than the previous generation. It shines in this segment, when compared to the other German competition. The zeal of the petrol engine and the tremendous grip of the chassis help it get such results. Push it around a bend, and it will follow the line you want it to.  The moment the tail steps out, the ESP kicks in and gets it back in position.

Also, the heavy steering wheel makes it feel lively and also inspires confidence in the driver. The only downside of this is that this heavy steering increases the fatigue and makes your city commute tiring.

The biggest drawback of this driver’s car is the ride quality. It is stiff and doesn’t feel good to drive on uneven and broken surfaces. The ride is harsh and there is a loud thud if you drive through a pothole. To our dismay, it doesn’t suit the Indian city road condition, as there are plenty of potholes.

The new 3 Series isn’t just larger in dimensions, but also looks more appealing in terms of its design. The interiors have also seen an upgrade in space and features, so have the engines.

If you love driving and are willing to compromise the ride, then the 3 Series is the ideal choice in this segment.