Published On May 10, 2022 By CarDekho for Mercedes-Benz C-Class

Mercedes has tried to improve the new generation C-Class in every possible aspect. Did it work? 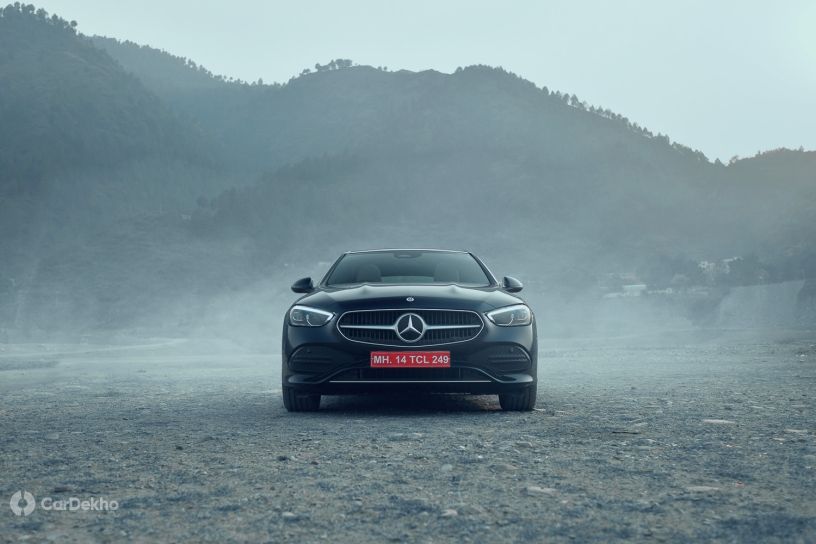 The Mercedes C-Class has come a long way. It has gone from being the most affordable three-pointed star to being dubbed as the ‘baby S-Class’ in its latest generation. Not only have the car’s popularity and size grown over the years, its price has gone up considerably as well. The latest generation of the car is bigger, more efficient, luxurious and tech-laden than ever before. Does it make it a perfect all-rounder?

The exterior of the C-Class looks sophisticated, well rounded and luxurious. Upfront, the large gaping grille with the three-pointed star in the centre dominates and gives the car loads of presence. In profile, the swooping lines make it look quite elegant and the 17-inch wheels on the Avantgarde variant look quite attractive. The best angle of this car though is the rear three-quarter rear angle. The teardrop-shaped split LED tail lamps look sensational and the coupe-like sloping roofline gives the new C-Class an athletic stance. The rear bumper too is well designed with the faux diffuser cutting visual mass.

The C300d comes in the AMG-line variant, which adds a dash of sportiness to the overall design. It gets a more aggressive-looking grille and front bumper, flared side sills and a larger set of 18-inch alloy wheels.

The new generation Mercedes C-Class is based on the same MRA II platform as the S-Class. When compared with its predecessor, it is 65mm longer, 10mm wider and sports a 25mm longer wheelbase which has translated into moreroom in the back. Ground clearance has been increased by 7mm as well.

If the new C-Class’s exterior seems a bit too plain to you, don’t leave the showroom just yet, for, it’s cabin is its real highlight. Unabashedly ‘inspired’ by the new S-Class, the W206 Mercedes C-Class has a similarly styled central console with the 11.9-inch touchscreen infotainment system taking centre stage. The overall design is stunning and so beautifully executed that the C-Class’s cabin has a sense of occasion that no other sedan at this price point has.

The layered dash design looks luxurious thanks to the use of wood and the air-con vents, which are inspired by fighter-jet afterburners, are not only beautifully designed, but the way they function with satisfying clicks every time you move them tells you just how well engineered they are.

The C-Class also gets the same Sienna Brown upholstery as the S-Class, which adds to the overall ambience of the car. Although the design and ambience of the new C-Class’s cabin is unparalleled, in terms of quality Mercedes has cut corners a bit. In the lower half portion of the cabin, Mercedes has used hard plastics and, when compared with the BMW 3 Series, it lacks consistency.

The 11.9-inch high-resolution infotainment uses the latest MBUX tech that we have seen on the latest S-Class. It has a bright vibrant display with big icons and the processing speed is top-notch too. In this system, you can also save driver profiles which memorises preferred seat position, sound settings, air-con settings and sunshade position too. You also get a voice command system which gets activated when you say ‘Hey Mercedes’ through which you can control a lot of car functions.

You also get a digital driver display which is crisp, shows you loads of information and you can also customise it to your liking. Just like in the S-Class, many of the controls are now touch-based for a ‘modern’ interactive experience. There are loads of capacitive touch controls like the steering wheel-mounted buttons, ORVM adjust buttons and the swipe function to open the sunroof.

In terms of comfort, the front seats are large and supportive which makes them comfortable even for long journeys. You can also set the driver seat really low for a sporty driving position or high up if you want a better view out while driving in heavy traffic. The one thing that we missed however is front seat ventilation which should have been offered at this price point.

The real upgrade has happened at the rear though. Unlike its predecessors, the new C-Class has a spacious back seat with a good knee room and headroom. The seat too is supportive with good back support and decent under-thigh support. On the downside, because the seat is placed quite low, getting in and out of the rear seat is not the easiest.

In terms of practicality, the C-Class performs well. Upfront you get loads of storage and the same goes for the rear as well. The only thing that the rear passengers might crib about are the lack of phone charging ports.

New C-Class’s boot is large and the opening is big enough. But, unfortunately, there is no space to stow the space-saver spare tyre which eats into a considerable amount of boot space. So if you want to carry a lot of luggage you have to leave the spare tyre at home, which might be a bit risky.

The new C-Class comes with three engine options. The most powerful is the C300d which comes with a 265 PS 2.0 diesel engine, while the C220d is also powered by the same capacity diesel engine, but makes a more sedate 200 PS. The most affordable model in the range will be the C200 which is powered by 1.5-litre turbo petrol and makes an impressive 204 PS. All these engines come with mild-hybrid technology, with the 48-volt system capable of delivering up to 20PS and 200Nm of torque for more punch lower down the rev range. We only got to drive the petrol version on this occasion.

Despite the small displacement, the motor responds quite well, and the C200 feels peppy at low speeds. This is thanks to the peak torque coming in at a low 1800rpm and the boost provided by the mild-hybrid tech. It is also a refined unit with it staying composed even when working at higher RPMs. The 0-100kmph time of 7.3 seconds is quick too, but definitely not as exciting as the BMW 330i which is 1.5 seconds faster and at a similar price tag. If you want to buy the fastest new C-Class, then you have to get the diesel C300d which makes a lot more torque and 61 more horses.

Not only is the small displacement of the petrol engine to blame here, but also the 9-speed automatic transmission. It is a smooth-shifting unit, no doubt, but, there is a sense of disconnection at the throttle pedal as the engine and gearbox take a brief pause before delivering power. The gear shifts too are a bit laid back which takes away from the fun factor.

The real sense of luxury in the C-Class comes from its suspension setup. At town speeds, the C-Class simply excels thanks to its absorbent low-speed ride. Well-judged spring rates help this German saloon feel supple yet well controlled. Even over rutted surfaces, the suspension has a surprisingly good level of crash-free bump absorption and you don’t feel most imperfections. Yes, there is some firmness at low speeds, but it never gets to the point of feeling uncomfortable. Even at higher speeds, the C-Class shows good composure and this makes it a soothing highway companion.

In terms of handling, the C-Class proves to be safe, predictable, and fun. It feels stable even when pushed hard and the chassis feels eager to change direction which makes the C-Class quite engaging to drive. If only the new C-Class had a more potent engine, the fun-to-drive quotient of the car would have been much higher.

The new Mercedes C-Class builds on the previous car’s strengths and now has become a formidable package. It is bigger and better in almost every way, as the new car feels well-appointed, more upmarket, spacious and well equipped. It is an easy-to-drive car and fun to drive around bends, but enthusiasts will still find the C-Class a bit lackluster to drive because of the petrol engine.

The small 1.5-litre turbo petrol motor has more than enough power for daily, normal driving, but isn’t particularly thrilling in terms of outright performance. But, if you are going to be chauffeur-driven and only occasionally take the wheel, the C200 just ticks every box perfectly. It’s an ideal choice for day-to-day motoring with all the bells and whistles to pamper its owners. And considering the package, the starting price of Rs 55 lakhs (ex-showroom) seems about right.