2022 Maruti Suzuki XL6 Review | Is It Worth The Extra Premium?

Maruti Suzuki has made some minor updates to the XL6. Can they justify the extra price premium? 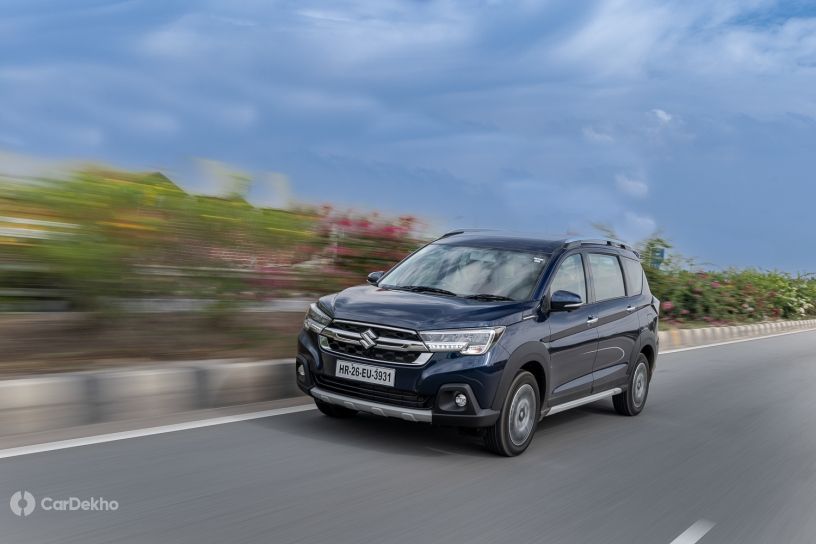 With stiff competition to contend with and to keep it fresh, Maruti Suzuki has given the XL6 a minor yet much-needed update. With the 2022 Maruti Suzuki XL6, you get minor exterior tweaks, additional convenience and safety features, an updated engine and a brand-new 6-speed automatic gearbox. Unfortunately, Maruti is charging a heavy premium for these changes. So are these changes so significant that the new XL6 can justify the more than a lakh price premium?

When it comes to design, changes are subtle but they help the XL6 look more premium and attractive. Up front, the LED headlamps and fogs are unchanged, and so is the front bumper. The grille, however, is new. It now gets a hexagonal mesh pattern and the centre chrome strip is bolder than before.

In profile, the most noticeable change is the addition of larger 16-inch dual-tone alloy wheels. They not only fill up the wheel arches well but also give the XL6 a more balanced stance. Other changes include a redesigned front fender to accommodate the larger wheels and blacked-out B and C pillars. At the rear, you get a new roof-mounted spoiler, shark fin antenna, chrome strip on the boot lid and smoked effect tail lamps that look sporty.

The updated XL6 weighs slightly more than the outgoing version. Unfortunately, it isn't because of structural changes for better safety. The weight has gone up because of the more high tech engine, which adds around 15kg, and the larger 16-inch wheels that add a further 5 kg. If you choose the automatic variant, that adds another 15 kg as the new gearbox has two more ratios.

The 2022 XL6's cabin remains unchanged except for a few details. You get a new touchscreen infotainment system, albeit the screen size remains the same at 7 inches. However, the revamped graphics and software make the system easy to navigate. The touch response is snappy as well. Yes, we were a bit disappointed by the fact that the screen size remained the same. But the reason for that is the fact that the screen space is sandwiched between the centre air vents and adding a larger screen would have resulted in Maruti needing to redesign the whole dashboard.

Besides that, the cabin remains unchanged. In the top two variants, you get leather upholstery which looks premium. What's not so premium, however, is the cabin quality. Everywhere you touch or feel there are hard shiny plastics. Overall the XL6's cabin lacks the sense of luxury that you get in something like the Kia Carens.

In terms of comfort, the XL6 still excels. The front two rows are comfortable with more than enough space, and the seats are supportive as well. But the biggest surprise is the third row. There is just about enough headroom, but knee and foot room impresses and under-thigh support is good. The fact that you can recline the backrest makes this one of the best third rows to spend time in.

The XL6's cabin is very practical too, with good storage space options for all three rows. What disappoints, however, is that you get only one USB charging port in this six-seater. When it comes to boot space the XL6 impresses not only with the seats folded but even with the third row up.

The new XL6 now gets ventilated front seats which work wonderfully and Maruti has also added a 360-degree camera. The camera resolution is good but the feed is a bit distorted. Nonetheless, it does help you park in tight spaces. Other than that the XL6 comes equipped with LED automatic headlamps, 16-inch dual-tone alloys, 7-inch infotainment system, 360-degree camera, cruise control, connected car tech, tilt and telescopic steering adjust and automatic climate control.

In terms of safety, Maruti is offering four airbags, ISOFIX child anchorage points, an electronic stability program and hill hold right from the base variant. However, we feel that Maruti should have given six airbags at least as an option in the top variant.

The new XL6 uses a similar 1.5-litre four-cylinder petrol motor as the old car, but it has been heavily revised and now offers dual variable valve timing. As a result on paper, it is a lot more fuel-efficient than before.

On the downside power and torque, figures have gone down slightly, but on the move, you don’t notice much of a difference. Just like the old engine, there is loads of torque from the word go and you can cruise at low speeds in third or even fourth gear. Even when you want quick acceleration the motor responds without any hesitation. As a result, its performance is effortless as gear shifts are kept to a minimum. The gear shifts on the manual transmission are slick and the light and progressive clutch make driving in the city a comfortable affair.

Now let's talk about the new 6-speed automatic transmission. Where the old 4-speed auto use to strain the engine as it used to take a long time to upshift because of fewer gear ratios, driving the new automatic is a much more stress-free affair. The gearbox upshifts early as the engine is spinning at comfortable speeds. It not only makes for a more relaxing drive but should improve its fuel efficiency considerably as well. It is an alert unit too, just a small dab on the throttle and the gearbox downshifts quickly to give you brisk acceleration.

Even out on the highway the automatic variant cruises comfortably thanks to the tall sixth gear. On the downside, high speed overtakes need to be planned as you feel a lack of outright punch from the engine. This is where a turbo petrol motor would have made a lot of sense. What has improved considerably is the engine refinement. Where the old motor used to get noisy post 3000rpm, the new motor stays quiet up to 4000rpm. Sure, post 4000rpm it does get quite vocal, but compared to the old car it is still noticeably quieter.

You don’t get a sport mode with this gearbox but you get a manual mode. In this mode with the help of steering-mounted paddle shifters, you can select the gear ratio you want to and the good thing is the gearbox doesn’t automatically upshift even at the red line. This will help when you are in the mood to drive fast or if you want more engine braking while coming down a ghat section.

Maruti had to retune the suspension slightly to accommodate the larger 16-inch wheels. On first impressions, the XL6 does feel plusher at low speeds as it takes minor road imperfections well. Unfortunately the roads in Karnataka where we were driving were buttery smooth and it was hard to judge just by how much the XL6’s ride has improved. So we will reserve our judgment on this aspect until we drive the car in more familiar road conditions. Even sound insulation has been improved where wind and tyre noise is well controlled, making the XL6 a more relaxing drive.

The XL6 was always known to be a family-friendly car and the new one is no different. It doesn't enjoy being hustled around corners. The steering is slow, devoid of any feel and it also rolls quite a bit when pushed hard. As a result, the XL6 feels comfortable when driven in a relaxed manner.

Overall, if you look at some aspects of the updated XL6, like the interior quality or lack of wow features or the engine’s mediocre highway performance then it definitely doesn’t justify the price premium. However, there are a lot of positives too. The improvements that Maruti has done in terms of safety and convenience features and fuel economy make the price premium a lot more palatable. But the biggest gains have been made in the refinement departments, where thanks to a quieter engine and better sound insulation the new XL6 feels a lot plusher and premium to travel in. The new 6-speed automatic transmission too works well and makes the XL6 an exceptional city commuter. Overall, improvements in the new XL6 are just incremental in most areas but they all come together to make the XL6 a more well-rounded package than before. Sure the price has gone up, but even now it is a lot more affordable than the impressive Kia Carens, which makes it a great value for money offering too.