Maruti’s bestseller gets a handful of changes and a new engine. Is it still the sensible yet fun choice it was before? 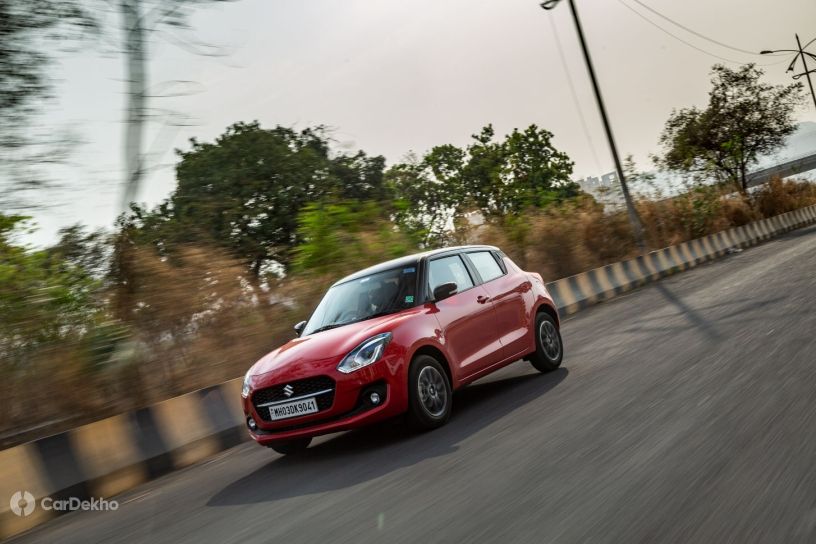 The third generation Swift has just completed a three year stint, expectedly setting sales charts on fire. Perfect time to introduce a juicy upgrade and take the fun hatch to the next level, you’d think. And lo, Maruti Suzuki has served up an updated version. Sadly, at first glance, it seems like a half-hearted attempt at a facelift. Should you expect more of the same from the Swift, then?

Maruti has stuck to the ‘if it ain’t broke, don’t fix it’ adage. Unfortunately, it’s come at the cost of a brand new car looking identical to a three year old one.

It’s easy to mistake the ‘new’ Swift for the pre-facelift. Save for the updated grille that now gets a honeycomb mesh-like pattern and a prominent chrome strip, everything else remains unchanged. The smooth flowy lines, the stubby nose and the raised rump — all Swift design highlights — have been left as is.

Exclusive to the top-spec ZXI+ variant are snazzy LED projector headlamps and a dual-tone finish for the alloy wheels, both carried over from the previous model. The least Maruti Suzuki could’ve done was give the Swift a new set of wheels. If you intend on picking the fully-loaded variant, you now have the option of a dual-tone paint scheme. Options here are limited to red with black, white with black and blue with white.

The rear remains completely unchanged. We’d have loved to see updated tail lamp graphics, maybe even a sportier bumper with some meaty exhaust tips poking out — hinting at the extra power under the hood.

If the design ‘updates’ left you underwhelmed, the interior has more of the same in store for you. The dashboard continues to be upright and angled towards the driver. It still feels hard, plasticky, and strictly average in terms of quality — especially if you’ve spent time in a Hyundai Grand i10 Nios. Black dominates this cabin, and it adds to the feeling of being in a budget hatchback. Maruti has tried to provide visual relief with dark grey accents on the dash and on the flat-bottom steering wheel, though.

Other than the iffy plastics, there’s not much to complain about. The ergonomics are spot on, and getting into a comfortable driving position is pretty easy too. The large front seats are accommodating and supportive, and get height adjustment functionality in the top two variants.

There are no updates to the rear bench either. It has ample knee room for a six-footer to be seated behind another. Three abreast in the rear is a tight fit, but doable nonetheless. Compared to rivals such as the Figo and the Nios, the Swift does offer a slightly wider cabin. Surprisingly, Maruti hasn’t equipped the new Swift with rear-AC vents. This would’ve definitely helped cool the all-black cabin down quicker.

No complaints on the practicality front. There’s ample storage among the glovebox, door pockets, seat back pockets and central cubbies. The 268-litre boot is decent too, but that large loading lip means you’ll have a hard time lifting heavy luggage. With the top two variants, you also get 60:40 split rear seats that bumps up the Swift’s utility quotient.

Let’s tackle what’s new first. The 2021 Swift now features auto-folding mirrors which fold in when you lock the car and open when you hit the start-stop button. There’s a new coloured multi-information display in the instrument cluster, lifted straight from the Baleno’s parts bin. Finally, there’s cruise control. Sadly, all these features are available only on the ZXi+ variant. If you intend on buying any of the lower trims, there’s no new feature available.

Suzuki’s updated ‘SmartPlay’ touchscreen finds its way into the Swift too. It’s fairly easy to get used to and has the usual features including Apple CarPlay and Android Auto. Sadly, neither can be used wirelessly. Other highlights on the top-spec Swift include a six-speaker audio system, automatic climate control, and automatic headlamps.

Maruti Suzuki’s fun hatchback is promising more smiles, courtesy a new petrol engine. While the displacement remains at 1.2-litres, the motor utilises Suzuki’s ‘DualJet’ tech which enables it to make an extra 7PS. You get to choose between a 5-speed manual and a 5-speed AMT.

When tested, the Swift recorded a 0-100kmph time of 11.63 seconds, a full second quicker compared to the outgoing iteration. Surprisingly enough, the claimed fuel efficiency sees an uptick too: 23.2kmpl (MT) and 23.76kmpl (AMT) as opposed to the earlier 21.21kmpl. This is likely due to the addition of the start stop functionality that switches the car off automatically when you are idling — say at a red light or stuck in a really bad traffic jam.

As you’d expect, the engine is butter smooth at startup and idle. No vibrations, no unpleasant noises — nothing at all. Driving the manual isn’t a task either. The super light clutch and the smooth throws from the gear lever will ensure you aren’t tired in bumper to bumper traffic. Speaking of which, you will notice the added power in daily driving. Sure, there isn’t a world of a difference, but picking gaps in traffic is slightly easier than before. Out on the highway, you will be able to cruise comfortably at triple digit speeds.

The 5-speed AMT delivers amply in terms of convenience. It’s surprisingly quick for an AMT, both for upshifts and downshifts. If you drive with a light foot, you wouldn’t really mind the slight head nod either. It’s only when you floor the accelerator does the slightly laggy nature of the AMT become evident, taking nearly a full second before upshifting.

Between the two, we’d pick the manual. It doesn’t warrant too much effort and extracts the most out of the Swift’s playful nature.

For daily commutes on smooth roads, the Swift should keep you comfortable. The suspension’s firmness only comes into play when you drive over uneven terrain or over sharp edges or expansion joints. A quick hack here is to simply go faster, as that seems to soften the movement inside the cabin. For highway trips, you wouldn’t be complaining at sane speeds. Push past that and it does feel slightly floaty, with the steering feeling light and disconnected too. But, the Swift is best enjoyed on a set of twisties, not straights.

In the ghats, you’ll appreciate the quick steering and the eagerness with which the Swift darts into corners. With the right inputs, you can flick the tail out and have some sideways fun too. The firm suspension plays into the Swift’s favour here, keeping unnecessary body roll in check.

Maruti Suzuki offers dual airbags, ABS with EBD and ISOFIX child seat mounts as standard. As a part of the update, the Swift got bigger brakes and electronic stability program (limited to the AMT versions).

Global NCAP has crash-tested the India-spec Swift wherein it scored a dismal 2 stars. The body shell integrity was rated as ‘unstable’.

As far as updates go, Maruti’s Swift may not wow you. It could’ve done with a fresher design, few more feel good features and a bump-up in quality. The only tangible update is the new engine. While the older petrol motor was already a benchmark in terms of refinement, performance and efficiency, the new engine simply does one better.

Despite the updates, the formula for the Swift has remained unchanged. If you want a small family car without compromising on fun when you’re driving alone, the Swift continues to be a solid choice.

Do they have sunroof

Maruti Swift is not equipped with a Sunroof.

Do they have sunroof

Maruti Swift is not equipped with a Sunroof.