Published On Nov 11, 2014 By Abhijeet for Chevrolet Sail Hatchback 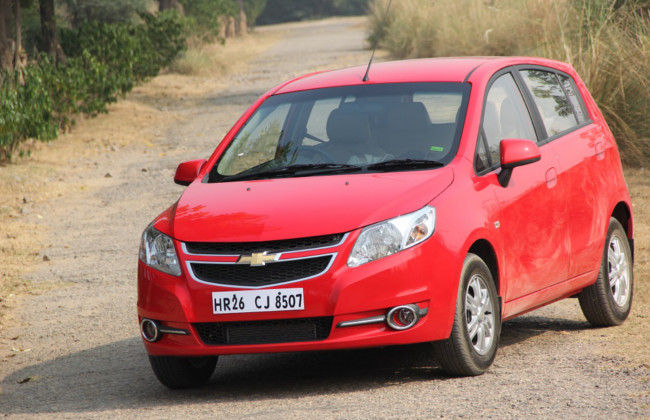 It has been nearly two years since General Motors launched the Sail twins in the country, and the model also happened to be on the company's priority list. The pricing was kept very aggressive for both the hatchback and sedan against its competition. The cars were spacious and built strongly with a rigid body structure. Both petrol and diesel engines were torquey and returned good fuel efficiency. But the twins failed to capture the hearts and mind of the population and they failed to reap benefits for the American giant. However, Chevrolet still being optimistic for the Indian market has given a slight update to the Sail sisters.

We get to spend a day and a short drive with the new update of the Sail Hatchback. The Sail holds its roots back in China were it was developed, but General Motors claimed that they have thoroughly worked on to suit it to our road and driving conditions.

The Sail Hatchback has always been an understated looking car, back from the day when the first U-VA came to our roads. For the year 2014, the biggest change is that the U-VA moniker has been dropped completely and the car is called Sail Hatchback now. A small ‘Hatchback' logo now appears on the rear glass just above the wiper. And apart from that nothing much changes on the exterior. The fog lamps get chrome detailing on them which actually does look nice and the front looks a funky now. The other new change on the outside is the new ‘jewel effect' tail lamp cluster improves the cars dated looks from the rear as well. However, the high mount tail lamps do increase the size of the B-pillars, that hampers visibility while parking. This especially becomes bothersome as the Sail Hatchback does not have parking sensors or reverse parking camera on any of the variants.

The car blends very sober styling with a dash of sporty appeal. The red colour on our test car is pretty much the nicest on offer. The swanky chrome lined fog lamps are available on all the variants except the base version for obvious reasons. Also the 14 inch 6 spoke split alloys wheels you see here come as a set of four pieces and only on the top-of-the-line LT ABS model. Apart from these changes there is nothing else to report, the design and the understated appeal is pleasing to all.

The large chunk of change has been brought to the interior of the new Sail Hatchback. The dashboard now gets a new dual-tone black and beige design. The previous car had a very boring looking bland steering wheel. The new black colour leather wrapped steering wheel with the Chevrolet ‘bowtie' make it a lot more appealing on the LS ABS and LT ABS models. But much to the annoyance the horn is not in the centre of the wheel but is set as two switches on either side of the steering.

Even the leather knob gets leather treatment but only on the top model. The air conditioning vents and the power window switches now get chrome lining on them which lend it a classy feel. But the placement of the power window switches for the driver and the front passenger in front of the gear stick makes it difficult to operate the power windows. Medium and short height drivers might even have to look for the switches to use them while driving, that makes it a safety hazard. Music lovers rejoice as the new Sail Hatchback gets 2-DIN audio system which has Bluetooth, USB and AUX-in connectivity to play all your tunes. The system is easy to use as well, and you can pair up to 5 phones through Bluetooth.

On the downside, the speakers are not really lively and sound like their throats are strangulated slightly while they sing. General Motors has changed the amber coloured backlit illumination colour to a cool soothing blue across the dashboard. The centre console is in silver finish and Sail only comes equipped with an air conditioning. The seats come with new leatherette upholstery on the top model, while the other variants too get new fabric upholstery to liven up the cabin a bit. The lack of equipment like climate control, electric folding OVRMs and steering mounted audio controls might put off many customers from the Sail Hatchback as the competition does come with these features.

Conveniences like rear power windows, central locking and remote keyless entry is available on all models except on the base version. The seats are a bit hard but supportive all around. One feature missing is the driver seat height adjustment which could be bothersome for many. Another issue is the touch and feel of the plastics which I don't like. The problem is that the fit and finish is fine and sturdy, but stands nowhere near as premium as the competition has to offer. At 248 litres the boot space is good enough but the loading lip is a bit high and less practical.

The power plants on the Sail Hatchback remain the same. Our test car has a 1,248cc diesel engine producing 74bhp of maximum power at 4,000rpm and a peak torque of 190Nm at a low 1,750rpm. The power delivery is linear and coupled with a light clutch enhances drivability through city traffic. The test mule returned a generous 20kmpl fuel efficiency figure under mixed driving conditions.

The other engine on offer is a 1,199cc petrol unit developing 82bhp at 6,000rpm and 108.5Nm of peak torque at 5,000rpm. Company claims suggest that the petrol powered brother returns 18kmpl. Only a 5-speed manual transmission is on offer on both these engines, which again puts the competition in lead as others offer automatic transmissions as well.

The transmission itself is pretty decent with easy throws and a butch gear lever. What we did hate on the diesel powered car is the noisy diesel clatter that filters in the cabin. This car could really use some good engine noise isolation. However, we hope it gets better on the petrol engine versions as they are fairly quiet.

The suspension is set up for our unsettled road conditions and is sprung soft at the rear. As the ground clearance is set at 168mm, occupants do experience body roll at corners. One nicety is the satisfying weight on the steering wheel, which itself is very dead, enhancing the drive on the Sail. On the safety front General Motors states that the Sail has a ‘Safe Cage' structure that distributes crash impact energy through the body of the car in midst of an accident.

Anti lock brakes (ABS) with electronic brake force distribution (EBD) is available on the LS ABS and LT ABS variants along with the driver side airbag. Passenger airbag however is only equipped on the top LT ABS model.

The new updates on the 2014 Chevrolet Sail are cosmetic and tiny in number, but do enhance the appeal of this earthy little hatchback. We like the way the car looks and the way it goes. Sure there is a lot missing from it such as tech conveniences and gadgets, but then it is strongly built and is very economical. And also you get a 3 years/100,000 km warranty from GM on the Sail, which can be extended to 4 or even 5 years. The problem with the Sail hatchback is that the competition around it has gone stronger and advanced. It is a decent car for the money GM is asking, but then the others are offering a bit more car for that money.