Published On Aug 05, 2014 By Abhijeet for Chevrolet Beat

2014 Chevrolet Beat vs Hyundai Grand i10 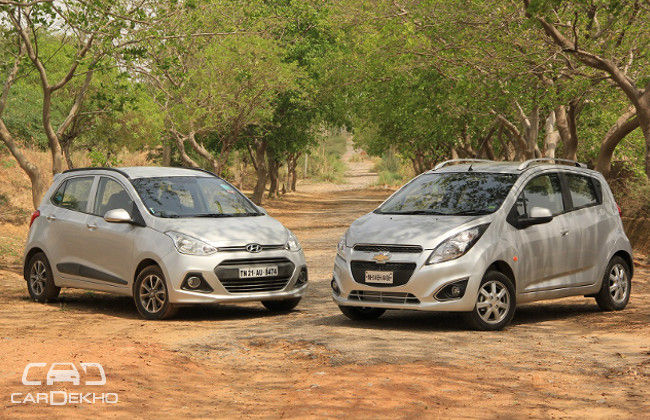 Hatchbacks are the need of the hour. Look around you; the roads are queued of never ending hatchback trails. Everybody has one and the ones who don’t are planning to buy one soon. The market then starts giving you new options every quarter, each one a bit better than the previous. We will be talking of two of the funkiest little hatches available in the country today. One is the good old Autobot, the Chevrolet Beat. Though it has been around for some time now, but Chevrolet has just recently given it a minor facelift thus raising its appeal. Then is Hyundai’s recent entrant, Grand i10, which has received a lot of appreciation from everybody. Both these cars are quality products and boast of frugal diesel engines serving under their bonnet. We take them out for a few days and learn more about their differences.

Both the American and Korean look funky and carry interesting design features. The Chevrolet Beat has a bold front face with dual port chrome grille. Chevrolet has given black highlights on the headlamps and jewel effect on the tail lamps which though are minor changes, but add to the striking appeal of the Beat. Also new are the new fog lamps which also get a touch of chrome. Then is the radical looking Hyundai Grand i10 showing off its elegant Fluidic design lines. It is a neat blend of curves, lines and bulges highlighting the entire body of the car. Both these cars are good looking in their own context. The Beat is sporty and hip hop while the Grand i10 is elegant and futuristic. Both these cars score high on styling and you will not go wrong with either of these. Beauty is subjective and more a question of individual tastes.

The interiors on both the cars live up to their exterior as the same funk appeal has been carried inside as well. The Beat has a futuristic looking dashboard with black colour dominating all around and inserts of silver polished plastics at the right places. The Grand i10 has a more grown up black and beige dashboard which is more subtle and easy to use.

The Beat switches might get complicated to use while the Grand i10 is a simple walk in the park. Plastic quality on both these cars is brilliant along with the fit and finish levels. The steering on the Grand i10 is a bit better to hold and the mounted controls are easier to fathom.

The front seats on the Beat are slightly bigger than the ones on the Grand i10. But then the i10 bolsters you in nicely so that to do not sway around on hard cornering. Both the cars come with fabric upholstery. Come to the rear cabin and i10 has the advantage. You get slightly more space and an air conditioning vent at the rear of the Grand i10. Noise insulation is better on the Grand i10 and it dampens out most of the exterior sounds, including the engine. The Beat’s diesel engine is a bit noisier and is audible the cabin.

The Chevrolet Beat and the Hyundai i10 Grand come in both petrol and diesel variants. Here we are driving the diesel counterparts as both the brands have worked great lengths to create refined and efficient diesel engines for their small cars. The Beat comes with a 1.0 litre 3-cylinder diesel engine producing about 58bhp of maximum power and 150Nm of peak torque from 1,750rpm.

The Hyundai Grand i10 features 2nd generation 1.1 litre U2 CRDi 3-cylinder diesel unit, that pumps out 70bhp of maximum power and a peak torque figure of 160Nm from as low as 1,500rpm. Both the engines are mated to 5-speed manual transmission. Refinement levels are better on the Korean’s engine. Straight away from the power and torque numbers you can tell that the Grand i10 has the legs over the Beat. It is quicker and faster than the Beat. But the clutch on the Beat feels much usable and smoother while setting off.

Both these hatchbacks have to spend most of their time running around on congested city roads, and they pass with flying colours here. Steering on the Beat is light and very easy to manoeuvre through traffic. It also gains some weight as the speed builds up. The same can be mentioned for the Hyundai Grand i10. The steering is actually lighter than the Beat’s and feels better to hold. These cars absorb potholes and uneven tarmac with ease but the Hyundai has better noise insulation, hence, lesser road noise enters the cabin. The ride quality is nicer on the Chevrolet than the Hyundai on normal city roads. The Beat feels like you are driving a bigger car than it is. However, on the highway it becomes more nervous than the Hyundai. The Grand i10 is a more stable car on long straights and speeds in excess of 120kmph.

It is quiet difficult to choose a clear winner here. Chevrolet Beat rides like a bigger car but the Hyundai has more power and torque to play around with. Grand i10 comes feature loaded and is more refined, but then the Beat looks more funky and delivers slightly better fuel economy. The Beat returned about 20-21kmpl on our mixed highway and traffic runs, whereas the Hyundai gave 18-19kmpl. In the end, the Grand i10 slightly edges ahead with better equipment levels and comfort features, but only just. The Beat is still a charming looking thing and makes a point for itself with that fuel efficiency rating.