Its celebration time for Red Bull Racing as triple World Champion - Sebastien Vettel clinched his third consecutive win at the Airtel Indian Grand Prix in New Delhi and thus became "World Champion" for the 2013 season, 4th time in a row. This podium finish also translates to the fact that the Constructors trophy now belongs to Red Bull Racing this season which once again is a 4th consecutive one in a row. Sebastian Vettel is the youngest four-time World Champion in Formula 1. 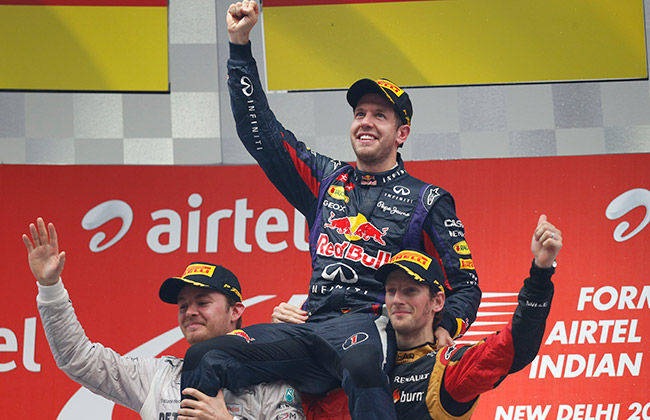 On winning the race, the German got so ecstatic that he executed a couple of donuts in front of a packed grand stand which invited a fine of 25,000 Euro's to the Red Bull Racing Team. FIA (Fédération Internationale de l'Automobile) came down heavy on team as well as their lead Driver on the pretext that this move was a violation of rules.

Mercedes' Nico Rosberg came in second followed by Lotus's Romain Grosjean in third. However, the mentioned 2nd and 3rd finish were only possible after an unfortunate retirement of Mark Webber (Red Bull Racing) due to an alternator failure on lap 39th out of the 60 lap race. Seeing this failure, Team Red Bull Racing advised triple time World Champion (Vettel) to refrain from using his drinks bottle and also not to engage KERS as it was going to be hard on the car.

Ferrari's blue eyed boy, Fernando Alonso could only manage an 11th place finish as he picked up front wing damage due to a collision between Kimi Raikkonen and Mark Webber which forced him to return to pits in the second lap itself for a nose change. Felipe Massa stuck it out as he lead the race for brief moment initially before the commissioning of regular pit stops to finish the race in 4th position. McLaren Mercedes' Sergio Perez came in fifth followed by Lewis Hamilton and Kimi Raikkonen in 6th and 7th places respectively. Force India Mercedes' Paul di Resta managed 8th position while Adrian Sutil who was once running third finished 9th overall. STR - Ferrari's Daniel Ricciardo completed the top ten places for the 2013 Edition of the Indian Grand Prix. Kimi missed out the podium finish due to tyre degradation, which meant Grosjean and Massa overtook him in the closing stages of the race.