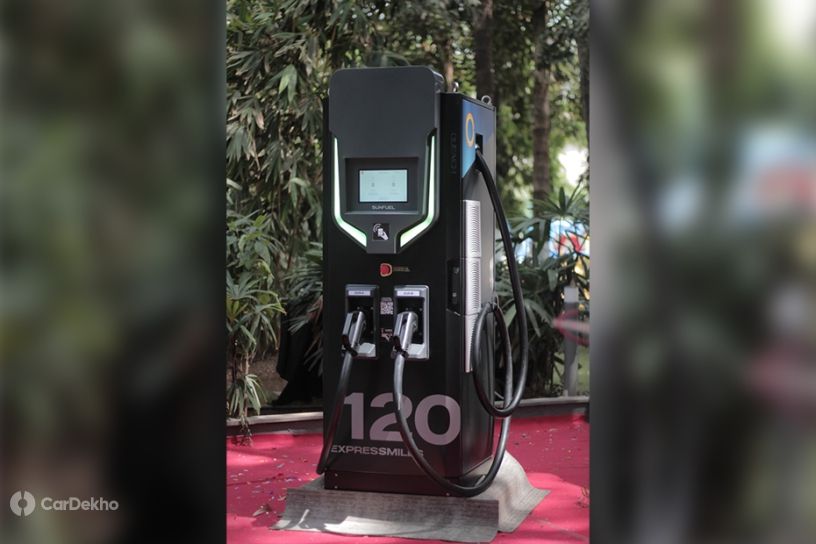 Sunfuel Electric has announced that it’ll be installing over 70 120kW fast DC chargers on Indian highways. The first supercharger will be installed on the Kalka-Shimla highway by early June 2022, which will make it the first charging station on Indian motorways with a peak output of 120kW.

Even though these fast chargers are more suitable for high-end EVs such as the BMW iX and Mercedes-Benz EQC with a higher charge rate, non-luxury EVs will also be able make use of these 120kW DC chargers. These superchargers vastly cut down the time required to juice up an EV by offering a full-charge for high-capacity EVs in under 60 minutes.

With the aim of making the charging infrastructure more robust in India, Sunfuel Electric plans to install over 70 DC fast chargers across the country.

You can go through the press release for more details:

At 120 KW, superfast highway charging is a gamechanger for high-end EV Adoption

New Delhi May 2022:  Sunfuel Electric, an EV Charging startup that became the category-leader in Destination Charging last year after chain-deals with hospitality majors like IHG, Radisson, Club Mahindra etc. has now stormed into the Highway Charging segment. The company has launched ‘ExpressMiles’, its Highway Charging Service, with the fastest DC charger for Electric Cars in India.

These 120KW superchargers on Indian highways will reshape the perception of EV charging infrastructure, especially for consumers who want to opt for high-end Electric Vehicles like Mercedes Benz EQC, BMW iX, Audi eTron, and Jaguar iPace. These cars can utilize the higher speed of the supercharger due to the higher C-Rate (Charge Rate) of their large battery packs. Commensurate supercharging network will also encourage other players to launch their own high-end EV models in the Indian market. Superchargers on highways enable EV users to charge-up and go in less than an hour in most cases. While this 120KW supercharger was launched from the factory in Pune yesterday, the first one of these will be seen in action on the Kalka-Shimla Highway when the ExpressMiles Highway Charging Service goes live early next month.

The launch event saw attendance from industry partners, EV Enthusiasts, and potential dealers who want to start their own highway charging stations. Gul Panag, co-founder, and Head of Partnerships & Community at SunFuel Electric interacted with the participants, marking this momentous occasion.

While this 120KW supercharger is most suitable for fast-charging high-end next generation EVs from Audi, BMW etc, it also works seamlessly with Non-Luxury EVs that are limited by the lower C-Rate (Charge Rate) of their batteries.

Gul Panag, co-founder & head of Community, Sunfuel Electric said: “I’m a proud EV user for well over 8 years now. I’ve seen electric mobility grow from an esoteric concept to an inevitable reality for the mainstream car buyer. Electric Vehicles are growing very fast as most people realize how they are fun-to-drive, easier to maintain, and cheaper to run.

As an early-adopter of electric cars, I did face range anxiety, especially on my outbound trips. We are proud to have addressed both these issues with the launch of the fastest highway DC charger to our large network across the length and breadth of the country and tie-ups on a group chain level with hotel chains like Radisson Group of Hotels and IHG, making electric travel to far-off destinations seamless.”

With the launch of this fastest supercharger, Sunfuel Electric becomes the first player to have a highway charger with a peak output of 120KW. The first, fastest DC charger will be installed on the Kalka-Shimla Highway and will allow for seamless highway travel across the country as more and more get installed.

Sunfuel Electric has the objective of enabling Electric mobility across the country through city-charging, destination charging and highway charging making the EV charging network and infrastructure robust and expansive. Sunfuel plans on installing over 70 DC fast chargers in the country in the near future.