As petrol cars come back in the game in India, petrol automatics are certainly the most sought after option nowadays. 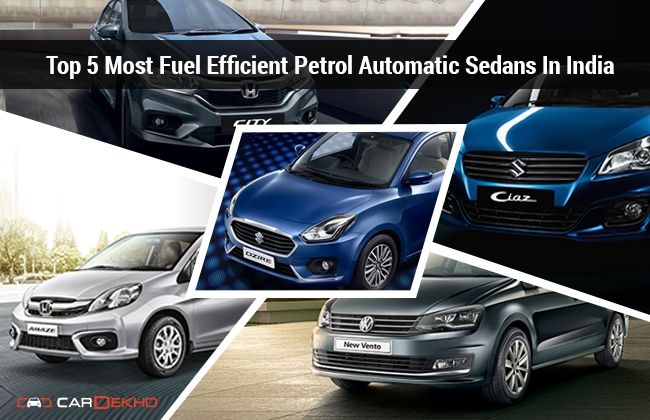 Though SUVs are all the rage these days, Indians haven’t set aside their penchant for three-box cars. Speaking of fuel choices, diesel cars had risen as a preferred option in almost every segment during the mid-2000s in the country, largely because they are inherently fuel efficient and the difference between the petrol and diesel prices was relatively more back then. However, petrol cars are back in the game and with the growing acceptance of automatics, petrol-auto combo is nowadays the go-for option. Let us check out five most fuel-efficient petrol automatic sedans in the country.

The third-generation Dzire (the ‘Swift’ label has been dropped) has upped its game in almost every key area, including its overall fuel efficiency. Though it carries forward the same petrol engine as the previous model, with a new lightweight platform and improved aerodynamics, the efficiency has gone up by 5.5 per cent.

The 2017 Dzire petrol automatic, which gets an automated manual transmission, returns an ARAI-certified fuel efficiency of 22.0kmpl, same as its manual counterpart.

In a fuel-efficiency listicle, it is not unusual to expect multiple Maruti Suzuki offerings. Sitting above the Dzire in its lineup, the Ciaz, takes the second spot on this list with an ARAI-certified fuel efficiency of 19.2kmpl (1.61kmpl lesser than its manual). Though it beats both of its closest rivals – the VW Vento TSI and the Honda City CVT – by a slight margin, the Ciaz petrol automatic loses out on its ancient four-speed torque converter automatic.

The VW Vento has the most advanced powertrain option here with a downsized turbocharged petrol engine coupled to a seven-speed automatic transmission. The Vento TSI's 1.2-litre turbo engine is the torquiest of the lot, thanks to its forced induction system, and returns a certified fuel efficiency of 18.19kmpl. The turbo unit is not available with a manual transmission option.

With its mid-cycle update (introduced last year), the 2016 Honda Amaze received a CVT (continuously variable transmission) automatic, replacing the old 5-speed torque converter unit. With the addition of a CVT, the Amaze got a slight bump in power figures (2PS and 1Nm) and the 1.2-litre is now in the same tune as the Jazz. The Amaze CVT returns an ARAI-certified fuel-efficiency of 18.1kmpl.

This engine has always been the backbone of the City in India. Even though it received a diesel engine option with the current fourth-gen model in 2014, the petrol has kept the City afloat in the segment ever since. The City’s 1.5-litre i-VTEC falls short in terms of overall torque output compared to the turbocharged Vento, but it is more powerful of the two. Further, it is the only car here to offer paddle shifters (seven-speed paddle shifters). The Honda City CVT returns an ARAI-certified fuel-efficiency of 18.0kmpl.

The aforementioned petrol automatic sedans were all the sub-Rs 20 lakh top five most fuel efficient ones in the country. There are a few luxury sedans as well, that even excel the ones mentioned above in terms of fuel-efficiency. Let’s check them out.

The Honda Accord re-entered the Indian market with its ninth-generation facelift model (the eighth-gen model was discontinued in the country). It is only available with a hybrid powertrain option now, largely to take on the very popular Toyota Camry Hybrid (also mentioned below). With an ARAI certified fuel efficiency of 23.1kmpl, the Accord Hybrid is technically the most fuel efficient petrol-powered sedan on sale in the country. The only thing that goes against the Accord Hybrid is its relatively steep pricing, courtesy CBU (completely built unit) import.

With its mid-cycle update, the first-generation A3 gets a downsized petrol motor in the country, which it borrowed from the all-new fifth-generation A4. It flaunts an ARAI-certified fuel efficiency of 19.2kmpl. This impressive figure is courtesy of its cylinder-on-demand tech, which completely shuts off two of its four cylinders when the corresponding output is not required, primarily for fuel efficiency. Result: the overall efficiency has gone up by nearly 3kmpl over the pre-facelift model.

The Toyota Camry Hybrid was the country’s first locally assembled hybrid vehicle and is produced at Toyota’s manufacturing unit in the South. Being competitively priced, the fuel-efficient Camry Hybrid rose to fame in the D2 segment ever since it was launched in 2013 (facelift model is on sale currently). Further, post the launch of the Honda Accord Hybrid, Toyota beefed up the Camry’s packaging with additional features to keep it competitive.