Test-driven cars like Baleno, New Swift, KUV100 and WRV, I finally settled down for Ford Freestyle after researching for around 5 months. Choosing the best petrol hatch giving maximum value for money is nowadays a daunting task given the options one gets in the market. However, the choice becomes a bit easier when you apply some filters, thus narrowing down the number of cars left. With my main priority of buying a car with solid build quality, I was a bit hesitant in choosing Maruti cars, since I have previously met with a major accident in my Swift ZDI 2012 model, all thanks to airbags due to which I and my co-passenger are alive today. Still, I went for the test drive of Baleno but the (poor) build quality of Maruti cars was still knocking at the back of my head, although Baleno test drive was amazing. Swift felt poorer than previous model, and all the features were strictly restricted to top-end variant (only). I won't talk about KUV here. Elite i20 is pricier than all other hatchbacks available in the market. i20 is too much. WRV was also too costly for my budget. Then came the Freestyle, which I test drove twice to make sure that I don't choose what I regret later. Now I am here today, after driving for 6700 km in last 6 months, most of which is within the city. First of all, the car looks muscular in comparison to most other hatchbacks, which was one of the points of my choice. Solid build quality is another reason, which is evident from its (very) heavy bonnet and too heavy doors. The interiors look decent with nicely fitted touchscreen display at the top of centre console. Driving a petrol car with an all-new petrol engine might be difficult for many, but I am very much satisfied with the driving pleasure. The seats are comfortable in the front, but average at the back. Legroom is ok at the back, but shoulder space needs improvement. Boot space is less which is 257 liters, but given the practical roof rails which can carry an additional 50 kg of luggage (with crossbars as optional accessory), carrying large suitcases and should never worry you. First free service was done at 2500 km run, with 0 cost. Mileage is so far an issue for me with the vehicle averaging just 14.4 km/l at 6700 km odometer reading, but it should increase with time, after 2nd free service. Overall during my 6 month wedlock with the car, it has exceeded all my expectations and I am looking forward to see more Freestyle owners in the future, because this car deserves much more than it is getting.

4.6/5
Based on671 User reviews
Write Your Review
Freestyle Reviews 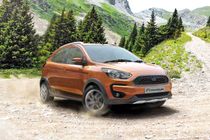