Volkswagen has been introducing several new variants of the Polo and now it is time for the Vento. The Vento’s existing automatic was a six-speed single-clutch that was mated to the 1.6-litre petrol. Now, the new 1.2-litre turbo petrol with the seven-speed dual clutch transmission is recent combination used on the Polo. This same drivetrain has been introduced on the Vento TSI as well. We get our hands on the Vento TSI and find out how good is it? 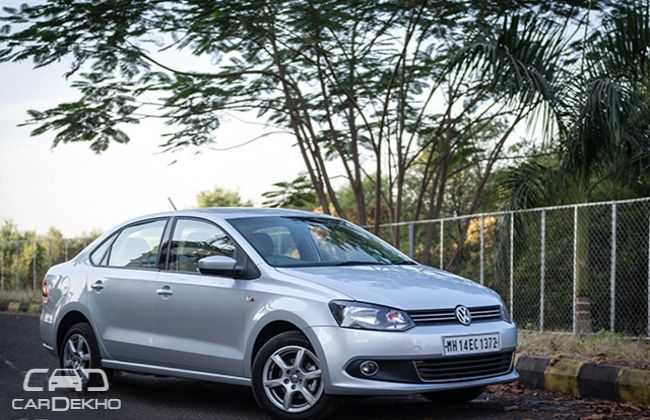 The Volkswagen Vento and the Polo are based on the same platform, and they also share most of the parts. Hence, the fascia of the Vento and the Polo is similar. It has the same front grille with two horizontal slats and smoked-out headlamps. The lower part of the bumper has been blacked-out near the fog lamps that have chrome surrounds.

The silhouette remains the same with the similar styling, however it is the alloy wheels that have been changed. The Vento’s rear too remains untouched, however it wears the TSI badge that is a bit larger than the other badges on this entry-level Volkswagen sedan. This is probably to highlight the difference in the engine under the hood. Probably a green-line or Blue Motion could have been done by Volkswagen to this variant or maybe on the manual version of this engine.

The interiors of the Vento too are unchanged. It has the same dual coloured instrument panel with top-notch fit and finish. Everything feels so German, with inch-perfect finishing of the plastic with soft-touch feel. The instrument cluster has twin-dials that are easy to read and an information display for fuel-efficiency, average and current speed and even trip and distance to empty.

The seats are wrapped with leatherette and are large and supportive. The rear seats are spacious too, and the front seat can be moved back and forth from the rear itself. The thigh support for the rear seats could have been better. The boot of the Vento is large too and sufficient for a weekend trip for four. The Vento TSI has the same interiors like that of the HighLine Vento as it has integrated music system, steering mounted audio controls and climate control.

This Vento earns the TSI badge because of the new engine under its hood. This might be a 1.2-litre engine only, but let us remind you that this four-cylinder mill has been turbocharged and it produces 102bhp of power. This power is equivalent to the 1.6-litre petrol that it replaces. Not only that but it is also aluminium, which means lighter and it even avails the duty cut for engines under 1.2-litre.

Even though the power produced by this engine as same as the 1.6-litre, it is the torque spread that is much better on this new engine. As even the engine is lighter and has a lower displacement, it is more fuel-efficient and lighter in engine too, which means better weight distribution as well. The NVH levels are fairly low, except for cold starts when the engine is noisy. The start doesn’t sound like a modern-day petrol car. Also, the engine screams as it revs above 4000rpm.

The other good bit of this powertrain is the transmission. The Direct-Shift Gearbox (DSG) has always impressed us, and this one is no exception. This replaces the regular single-clutch six-speed to this one which is a seven-speed. The gear ratios on this box are tailored as per the Indian driving cycle for maximum utilisation of power. Blip the throttle, and the transmission responds immediately, and at the time it shifts smoothly while cruising. There is also tiptronic transmission, if you like to make those manual shifts. However, there is just one thing that we aren’t happy with. When you suddenly go off the accelerator, the engine downshifts and this creates a jerk. Even though this a good safety feature, but the jerk could have been avoided.

The fuel efficiency is good too, as it returned us about 11-12km/l in city traffic. Now this good for a petrol automatic. Despite the power and torque it produces and not to forget the convenience of an autobox.

The ride on the Vento is a tad stiffer, for this reason the handling is better.  Even though it is softer than the Polo, as it sits on a longer wheelbase. Though the suspension does a fine job of soaking a good amount of the shocks, the occupants feel some bumps. The ride at the rear is a tad better, as the springs are softer, this has been done for more comfort for those who are chauffeur driven.

Volkswagens are always known for their quality, their driving abilities, the flexibility of the chassis. The Vento being based on the Polo platform is no different. The Vento does handle well, and is one of the best in its segment. The alacrity of the chassis is good and there isn’t much of a roll. The Apollo Aceleres on the Vento have decent road holding in the dry and the wet but the road roar is loud on concrete roads. The electronic steering wheel is light and easy to use on day-to-day basis and perfect for long drives.

The Vento TSI is about Rs 20,000 more than the regular automatic, but it has far more advantages than that engine. Hence, this is a good upgrade by Volkswagen as the Vento TSI is definitely one of the best and fuel-efficient petrol automatics around.