The Volkswagen Vento has been around for the last two years, and was introduced shortly after the launch of the Polo. To capture a good chunk in the Indian car market, Volkswagen introduced vehicles in the B+ and C+ segments. To freshen up the line-up, the German manufacturer has embellished its entry-level hatchback and sedan with more features. We drive this revised version of the diesel Vento. 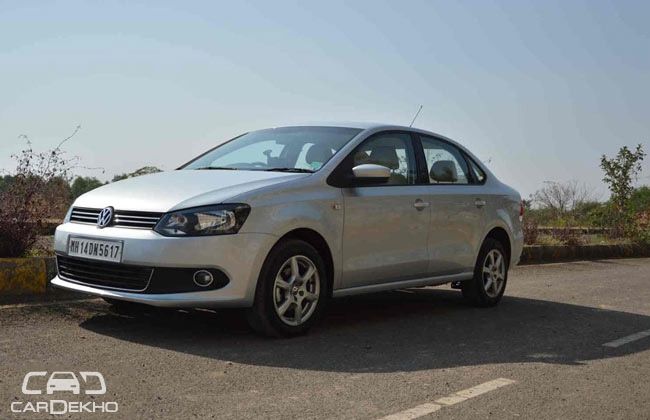 Vento carries the styling of the Polo, as the duo is based on the same platform. Since its launch in 2010, not many changes are made to exterior styling of the Vento. The fascia of the Vento remains the same, as the new blacked-out smoked effect headlamps add more charisma making it look more contemporary than before. Apart from that, the rest of the kit on the Vento remains the same.

The silhouette is unchanged and the only change here is the design of the alloy wheels.  At the rear, no alterations are done. It remains identical. Nevertheless, the design of the Vento still looks contemporary, though more like a sober-design craved for the corporate world. It does reflect the German-connect as it is at the end of the day, Polo with a boot.

Volkswagen has retained the typical German standards on the Vento’s interiors. The quality of materials, the fit and finish all are up to the mark. The door shuts with a “thud” and you do feel insulated when you step in and close it. The quality of the materials and even the ergonomics of the instrument panel are well engineered. The design is simple, yet subtle.

Interiors are now embellished with various features like satellite navigation, Bluetooth, reverse parking camera, leather seats and also audio controls mounted on the steering wheel. The music system has also been changed and this gets USB connectivity. The Bluetooth however, isn’t that friendly as it works from the connected device and has only one speaker with a low sound output. Also, the music system isn’t in sync with the Bluetooth, so one has to reduce the volume of the music system to speak using Bluetooth.

Having a longer wheelbase than Polo, Vento offers more comfort for the rear seat passenger. The space is sufficient at the back with decent head room and thigh support. To adjust the knee room in the second row, the passenger isn’t required to step-out, Volkswagen has given a lever to adjust the front seat from the rear. The front row seats are also large and comfortable. The comfort and insulation levels make you feel like the interior of a bigger car. Long journeys aren’t tiring and can be easily be done. For the steering being telescopic, it can be adjusted for rake and reach. This helps to do the fine tuning of the best driving position.

Volkswagen offers the Vento with 1.6-litre petrol and diesel engines. These are four-pot engines, basically an addition of extra cylinder to the existing 1.2-litre Polo engines. The upgrade being cosmetic, there are no changes made to the mechanicals or underpinnings.  Our press demonstrator was the 1.6-litre diesel, this churns out 104bhp of power and also a peak torque of 250Nm. This is a gem on an engine, however the noise produced in high in decibels. Crank the engine, and it wakes up to life with noisy diesel clatter. The clang reduces once the engine warms up, but it still cannot be ignored.

The power delivery of the engine is linear and it has a strong mid-range. The low range isn’t bad either, which makes pottering around town a simple affair. Also, overtaking in city or highway doesn’t necessarily mean downshifting. The five-speed gearbox on the Vento is smooth and easy to shift. The shifts on this manual transmission are slick and easy to shift. It is however the clutch travel that we are against. It can cause fatigue, especially while driving in bumper-to-bumper city traffic. The petrol is also offered with a six-speed automatic transmission. The diesel powered Vento isn’t available with an autobox. The Vento diesel is highly frugal and he returns about 14-15kmpl in general city driving.

Volkswagens are always known for their quality, their driving abilities, the flexibility of the chassis. The Vento being based on the Polo platform is no different. The Vento does handle well, and is one of the best in its segment. The alacrity of the chassis is good and there isn’t much of a roll. Based on the Polo underpinnings— which is the same chassis that is used for the Polo Cup cars also— the inheritance was obvious.

Ride on the Vento is a tad stiffer, for this reason the handling is better. Though the suspension does a fine job of soaking a good amount of the shocks, the occupants feel some bumps. The ride at the rear is a tad better, as the springs are softer, this has been done for more comfort for those who are chauffeur driven.

The Apollo Aceleres on the Vento have decent road holding in the dry and the wet. However, the road roar is loud on concrete roads. The electronic steering wheel is light and easy to use on day-to-day basis. For the enthusiasts, it takes a while to get used to the steering feel, but it isn’t difficult.

The Vento at about Rs 10 lakhs (ex-showroom, Delhi) is now a better value for money proposition than before. The added brownies do make add more value to it. So, if you need a vehicle with good German build quality, decent features and a powerful and frugal diesel engine, the Vento is your choice. If you need more bells and whistles, there are some other options in the market today.