Published On Mar 26, 2013 By Rahul for Toyota Platinum Etios 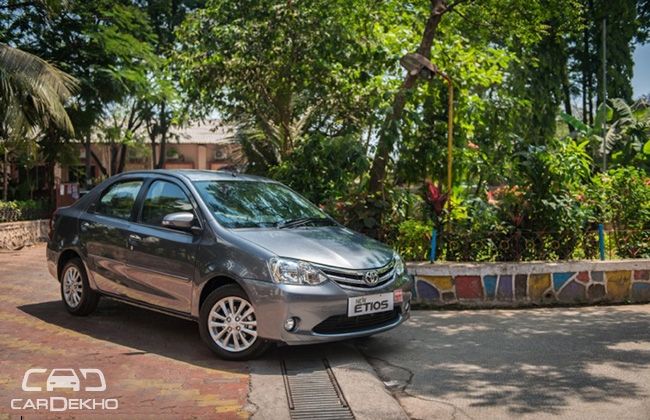 Toyota has revived the Etios and the hatchback giving it a midlife facelift. The company had introduced the sedan in 2010 and this was their new entry-level sedan, soon the hatchback followed it as well.

With the titivating its products, Toyota has made some changes to the vehicle to make it look more contemporary and also recuperate niggles that existed on this sedan. We find out if the Etios is a good buy.

The design of the Etios is more or less the same. Toyota has enhanced the styling by giving it some cosmetic changes, for instance the front grille has been redesigned to contribute to the styling. This fascia reminds us of the Toyota Vios sold in the South-East Asian markets.

The ORVM design has been changed and on models above V gets turn indicators. The silhouette remains untouched and even the rear design can’t be differentiated at a glance. The styling of the tail lamps has also been tweaked and one can easily mistake it with the old design. Apart from this, the rest of the kit remains identical.

Toyota has made changes to the variant on the Etios. For instance, a new J-D trim is introduced that will be the new entry-level trim on the Etios diesel to attract more customers. The J variant was always available on the petrol, but now even the diesel gets it. Also, the VX and the VX-D have been discontinued, and now the top-of-the-line version is the V (with safety pack) in petrol and diesel. The safety pack is optional on the V model.

Interiors of the Etios have received a sea of changes. Not many changes are many on the outside but the interiors do look different from the previous car. The dashboard now gets a new two-tone ash brown interior from the models above G-SP.

The beige doesn’t just make the interiors feel premium, but also give a sense of spaciousness. The speedometer now has a blue backlit, and the centre console gets a new music system.

The quality of materials has seen an improvement, however the feel is still hard.

The front row seats now have adjustable headrests and even the colour of the fabric is changed from grey to beige. This further enhances the instrument panel styling and feels more upmarket.

The door pad fabric is also different and it gets wooden panel on the power window switches. The wooden panel does look classy while the blue-backlit instrument cluster gives it a bit of trendiness. This seems to a bit of mismatch.

The front seats have decent support and space, while the rear seats are comfortable and have sufficient room for knees and head. All we wish that it has some more support for the thighs. The central tunnel is flattened, making it easier for three people to sit. Even the 595 litres of boot is the largest in its segment.

The petrol produces decent power, but it is the power to weight ratio of the Etios petrol that makes it quick. The drivability is good and there is sufficient power on tap. We love this engine and even the fuel efficiency is good, as it will return about 11km/l in city under normal driving conditions.

The power delivery of the diesel is decent and there is no turbo lag. This is the same diesel engine that also powers the Corolla Altis and we like this mill. The engines on the Etios were always good and Toyota hasn’t made any changes to them.  What this oil burner lacks is the punch that most of the modern day common rail diesels have. But the drivability is commendable and the engine doesn’t show any signs of stress or strain when pulled from low revs. The oil burner returns about 14-15km/l in city under normal driving conditions. The shifts on the box are also decent, with short throws.

The driving dynamics of the Etios remain untouched. The ride is pliant and composed at low and moderate speeds. The ride on the rough surface is also comforting as the suspension does a good job of soaking the bumps all the road shocks, without affecting the occupants.

The handling of the Etios is decent within the city speed limits. It cannot be driven hard around corners, thanks to the soft suspension set-up. The chassis is fairly capable as it is used in the Etios Racing Cup, the only major difference being the stiffer suspension and more meaty tyres. The steering wheel is light and easy to drive and park in busy lanes. However, it does feel slack and this reduces confidence of the driver. However, it does a good job despite it feeling disconnected as the tyres obey all the commands given by the tyres. It does take some time to getting used to it.

The Toyota Etios was always a practical sedan with well-powered and frugal engines, spacious interiors and boot, and decent frills on offer. Quality was a major concern, but now Toyota has revived the styling to a great extent. The quality is now decent and even the styling of the instrument panel. We still recommend the Toyota Etios as a sedan to buy if you need function over form.