Does the Tata Tiago AMT live up to its promise of providing a feature loaded package with the convenience of an automatic transmission at a reasonable cost? We find out. 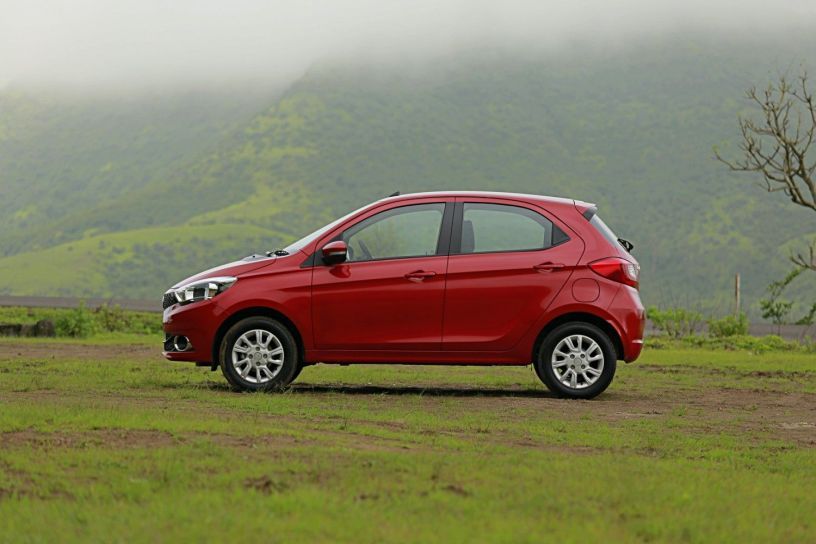 In 2011, our cities housed more than 31 per cent of the country's over 121 crore population and estimates suggest this will go up to more than 40 per cent by 2030. If you are a car owner or want to buy one, you will know that the roads in many of our cities are choc-a-bloc with traffic; cars with automatic transmissions make the most sense in such situations.

Tata’s small hatchback, the Tiago, is offered with an AMT automatic transmission with the petrol engine. Our test car is the top of the line XZA while it is also offered in the mid-level XTA trim too. The Tiago XZA AMT promises the perfect mix of class-leading space, premium features and the convenience of an automatic transmission without being too expensive or feeling like a car that is built to a budget. We find out if that is the case.

The Tata Tiago has been on sale in India for over a year now. Hence, most of you may be familiar with how the car looks. The Tiago has that energetic look about it, with the stretched headlights, sculpted body, smart looking 14-inch alloy wheels, a funky multi-layered roof-mounted spoiler, compact tail lamps, etc.

The exciting design is also complemented by the bright colours that the Tiago is offered with - the 'Berry Red' paint on our test car definitely turned heads.

There isn’t any badge on the hatchback that makes it clear that the car is equipped with an automatic transmission. The only indication of this fact is the added 'A' in the variant badge at the rear.

The Tiago XZA's interior is identical to the one found in the non-AMT versions, save for the new gear lever, the missing clutch pedal and the larger brake pedal.

The dual-tone black-and-grey interior theme is simple with small design details that excite. Several parts have been shared with other Tata cars to keep costs low - the steering wheel, steering wheel-mounted stalks, gear lever and switches among others will feel familiar to those who have sat in Tata’s latest range of cars before. The whole cabin feels premium. All the plastic surfaces are pleasing to touch, the seats get textured fabric and, at first glance, the only sore spot are the pull-type door locks.

Ergonomically, the Tiago is great for most drivers with only the tallest of people finding it a bit cramped. The height-adjustable seat and the tilt-adjustable steering make finding a comfortable driving position effortless. The small steering wheel is chunky, has a conveniently placed thumb grip, and controls for the infotainment system. The pedals are well spaced out and as with any automatic car, the brake pedal is wider than normal. The dead pedal has not been modified and is similar in terms of shape and size as the manual variants. Simply put, the dead pedal is a bit inadequate to rest your left leg for long periods of time.

The rest of the car is the same as the regular Tiago. You can check out our impressions of the car here. The Harman-designed 8-speaker surround sound system deserves a special mention here - it has a brilliant sound output that is usually experienced in cars that are priced much higher. The infotainment system has a lot of functionality even if it uses a monochrome screen. You can pair the infotainment system with Tata’s Juke-Car app to create a custom playlist from multiple phones or even use the navigation app from your smartphone for turn-by-turn directions. The screen also doubles up as the display for the reverse parking sensors.

It's the same 1.2-litre petrol motor that powers this Tiago with no difference in power or torque outputs. The only difference here is that the power is sent to the front wheels through a 5-speed automated manual transmission (AMT) instead of the 5-speed manual found in the regular variants.

Fire up the engine and you realise that there is a considerable amount of vibration emanating from the 3-cylinder motor at idle. It is not bone-rattling but it can get irritating if you are sat idling in the car for a long time, as can be the case in stop-go city traffic. But, as you get going the engine smoothes out.

Let go of the large brake pedal and after a tiny delay, the car begins to creep forward smoothly. The initial response from the engine when you step on the gas is delayed too. The overall nature of the engine and gearbox is a bit laid back, with the gearbox preferring to upshift as quickly as possible in the interest of fuel economy. Being an AMT, the gearshifts aren’t fast, but thankfully the Tiago balances it with smoothness. There is minimal head-nod motion during each gear shift, something that AMT-equipped cars are notorious for.

The Tiago's gearbox is quite restless, in the 'Eco' or 'City' driving modes it constantly tries to adapt to every pedal input or change in inclination. Learning to control the gearshifts just by modulating the accelerator isn’t as easy as on other automatics. It may upshift as soon as 3000rpm or decide to hold the revs till 4000rpm when it senses a bit of urgency from your right foot. Downshifts may consist of going down one gear, or even two at times - but there is no predicting when it may happen. The best way to use it in the auto mode is to adapt to the gearbox’s nature and take things easy.

Pressing the ‘Sports’ button, placed at the bottom of the gearshift console, guarantees that the transmission will shift up only after the engine reaches the 6000rpm redline. If you want almost total control over the gearshifts, you can slot the gear lever into manual mode and push up to upshift or pull down to downshift. Why do you only get 'almost total control'? Well, you won’t be able to shift up under 2000rpm when you really want to take it easy, neither will you be able to downshifts above 4000rpm when driving hard.

The Tiago AMT is frugal, both in the city and on the highway. In our real-world tests, it was able to achieve a mileage of 16.04kmpl in the city and 22.03kmpl on the highway. This is 3.18kmpl lower and 0.35kmpl higher, respectively, when compared to the manual petrol variant. You can extract more fuel efficiency from the car in the Eco mode in the city, but the sluggish responses would put off anyone other than a saint.

With a 0-100kmph time of 16.31 seconds, it is not the fastest accelerating hatchback in the segment. The slow time can be attributed to the very tall gears, the smooth-but-slow shifting gearbox and the Tiago's high kerb weight (1024kg).

As can be expected, the Tiago's steering has been tuned for ease of driving in the city than high-speed feedback. The lighter steering makes manoeuvring in the city very easy, which combined with the automatic transmission makes the Tiago a relaxing car to drive. However, at higher speeds the Tiago’s steering requires constant adjustments as it is a bit light and vague.

When it comes to ride comfort the Tiago is surely one of the better cars in the segment.  While the suspension is a bit firm it handles most road surfaces without any problems. Neither do you hear any thuds from the suspension as you go over poor roads. However, some vibrations do filter into the cabin.

On the flip side, find a smooth road and the stiffer suspension setup shines. On the highway, the Tiago feels very stable even at triple-digit speeds. Even on winding roads, it feels at ease as body roll is well controlled.

The enthusiast in you will enjoy driving the Tiago on empty mountain roads. Mid-corner bumps are also handled without any drama with the Tiago begging you to push it harder. The engine revs smoothly from low speeds, the gearbox can be made to hold a gear in the manual mode and the engine note is quite sporty when revved hard. The tyres do have a tendency to squeal but there is plenty of grip on offer.

Being the top-of-the-line variant in the Tiago range, the XZA is fitted with all the safety equipment that a hatchback at this price range is expected to feature and a bit more. Dual airbags, ABS, EBD, front seatbelts with pretensioners and load limiters are offered as standard. Other features include day/night IRVM, auto door locks, front fog lamps, rear windshield defogger and wiper.

The Tiago features a segment-first corner stability control system which ensures the car doesn't swerve inwards when you apply the brake while taking a corner.

The rear parking sensors are a welcome addition to the Tiago's arsenal of safety features. The parking sensor display is integrated into the multimedia screen and, while reversing, the system automatically lowers the volume of the music that comes out of the 8-speaker setup.

At Rs 5.36 lakh, ex-showroom Delhi, the Tata Tiago is indeed a value-for-money hatchback that offers the convenience of an automatic transmission and almost none of the drawbacks of a budget car. As a daily commuter, the Tiago AMT will free you from the hassle of constantly changing gears while cocooning you in a spacious and comfortable cabin. It will even help you relax by playing out your favourite tunes from its brilliant surround sound system. The only advice we’d give is to exercise your patience, because the automatic transmission is not the best at taking orders. If you can, the Tiago AMT can be a lot of car at a very reasonable price.